Our first weekend in Japan was such a blessing. It began Saturday morning as we loaded into a van with four members of the Tachikawa congregation. The trip from Tachikawa (Tokyo) to Ibaraki Christian University in Omika (Ibaraki) was about 80 miles. It took us about three and a half hours since it was a holiday – “Showa Day,” the birthday of the former Emperor Showa who reigned from 1926 to 1989. 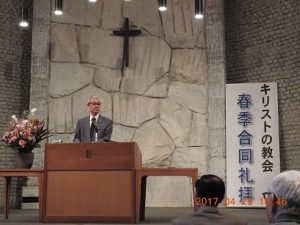 The weather was beautiful. We arrived a little after the joint worship had started. Brother Ataka was the guest speaker speaking from Philippians 2:1-2 and Acts 16. He encouraged us to make the proclamation of the Gospel and our fellowship together in that effort priority. He mentioned his time with the Park Avenue church. He was impressed with their desire to know the Word (Jesus and the Bible) and their enjoyment of fellowship as they studied together.  He and his wife stayed in Memphis for four months last year as a guest of a grant the Harding School of Theology received and worshiped with the Park Avenue congregation during that time.
More than 160 assembled from 22 different congregations. Congregations as far north as Sendai, Miyagi, and as far west as Numazu, Shizuoka. The singing was wonderful. The Hitachi church hosted the event and did an outstanding job of organizing things. 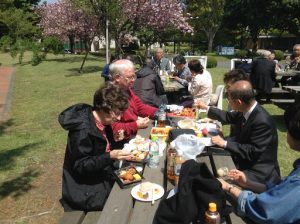 Following the assembly, many of us opened our bento (box lunches) and had additional fellowship together on the campus. The weather could not have been any better. There were so many friends to greet and visit with. Eating was secondary. Outstanding fellowship.
We went home with Marlin and Jeanne Ray as well as an intern working with them, Maria Valdez. Marlin has recovered enough from the July accident to drive. He is also able to walk without a cane or crutch, but he continues to have a good bit of pain in the injured foot and may need an additional operation. After a brief rest, we took them out for sushi. Our first on this trip. 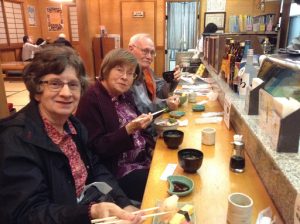 Sunday we worshiped with the Tomobe church. Over twenty assembled to remember the Lord and praise Him together. The Rays have worked with this congregation for over thirty-five years. They are a bright candle in a very dark city. I shared a lesson with them. Following the assembly, we had curry rice together.
As we rode back on the train, we rejoiced at the many blessings we had received. Faith is alive and the followers of Jesus are active in Japan. 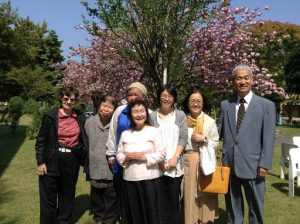 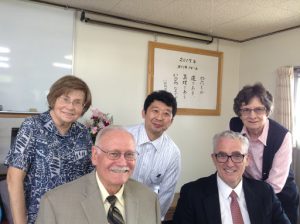