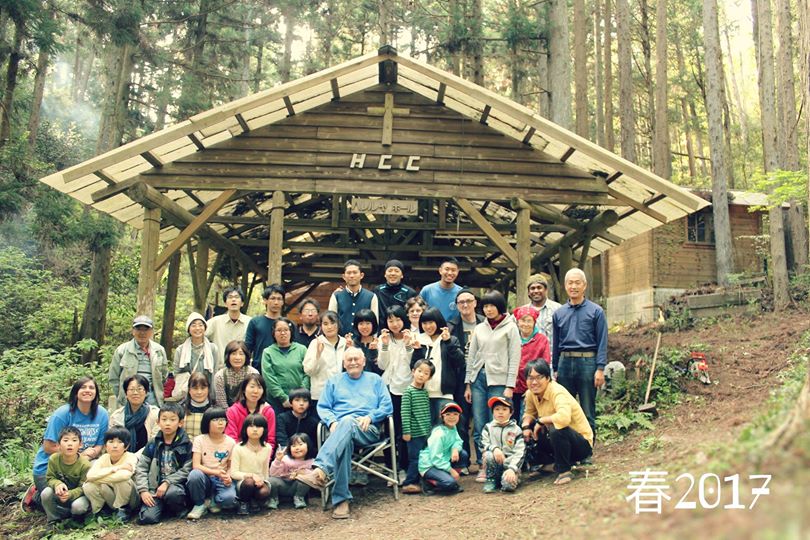 We returned last Friday night (May 5) after three days and two nights at the Hitachi Christian Camp (HCC). This was its 62nd year of operation. Marlin and Jeanne Ray along with Hideki and Nagisa Ataka have been important in keeping the camp going and making it useful to the churches in Japan. 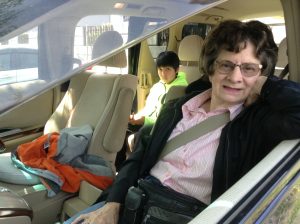 Our day started early May 3 as we left Tachikawa to head to Tomobe by train (a three-hour trip). This was Golden Week (three consecutive holidays and a weekend), so the trains were crowded with people getting out of the city. Thankfully we had purchased tickets ahead of time. Jeanne Ray met us at the train station. We stopped by the church building to pick up four middle school students before heading up to HCC.
You hike into camp after parking in a cemetery parking lot. They have an arrangement with the cemetery to use the parking lot during camps. The uphill hike to the camp traverses a valley with a stream which you have to cross four times. The further you hike the quieter it becomes and soon most of the sunlight is filtered through the Japanese cedar forest of straight 50+ feet tall trees. 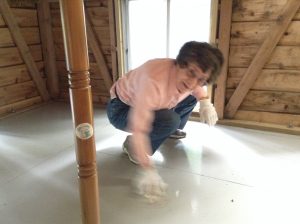 Several went to the camp early to set up the kitchen and open cabins. However, the cabins still needed to be cleaned out and bedding aired. A snake was found in one of the cabins. Nishimura-san, camp director, was able to catch it. It was a non-poisonous snake.
The weather could not have been any better. It was clear all three days with temps in the low 40’s at night and low 70’s during the day. Josephine and I had top bunks in a cabin Marlin had made for him and Ataka-san. While it was a very nice relatively new cabin, it was at the top of the hill which gave a great opportunity for exercise. We slept warm as long as we stayed in the sleeping bag and the blankets did not fall off the bed. We wore our clothes to bed each night. That is perhaps the longest I’ve gone without a bath.
The fellowship was wonderful.We made new friends. Frisbee throwing was especially a hit as was the fire which was kept going most of the day. There were two elementary girls who went back and forth time and time again gathering wood for the fire. They could find a lot of limbs, etc. which had fallen from the cedars.
Each morning I was able to get up early (about 4:30, sunrise was about 4:20) for a walk. The first morning I went uphill to a clearing for my devotional time. Psalm 19 came to mind, and I read it in Japanese since I had not brought an English Bible to camp. Being in nature reminds us of God’s awesome power and wisdom as he created a very intricate world. Psalm 19 became the topic when I was suddenly asked to give a devotional at the staff meeting later that morning.
As I sat on a log in that clearing, I thought about coming to HCC for the first time and not knowing what arrangements we might have for sleeping, etc. I thought about refugees who go out not knowing what kind of facilities or sleeping arrangements they might have. We did not know either, but I’m sure our sleeping arrangements, etc. were much better than the refugees. Doing without conveniences and not knowing things made for a good spiritual learning experience and a reminder of how much God blesses us each day.

The second morning I went downhill to the cemetery where we began our walk into camp. The cemetery overlooks the city of Hitachi and the Pacific Ocean. I watched the sun come up over a bank of clouds in the distance while reading Psalm 10. The writer wondered why the Lord was so far away. Being surrounded by hundreds of graves was sobering and made me wonder what could be done to help more people hear about the Lord. 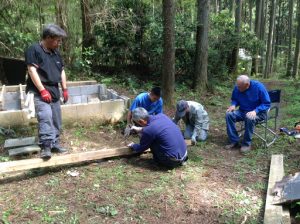 There was work to be done at camp as well. Drains were cleaned out in preparation for the rainy season. I helped a brother put up a railing in our cabin. The rotten floor of another cabin was removed. We raked up at least one if not two years of dropped twigs and limbs. We also studied the Bible together and played together. The meals were delicious and a good time for fellowship.
We left with a renewed appreciation for the Rays and Atakas as well as others who have worked through the years to prepare the camp facilities and to provide a wonderful retreat and learning time for so many. Several of those who came to camp had been baptized a bit further up the hill at the headwaters of the stream running through the camp. We give thanks for this ministry and pray that it will continue to have an impact on people’s lives.
[Show as slideshow]