We are grateful for your continual support and especially so during this time of recession in the US. The economic shortcomings are turning into a world wide recession. Although we still do not have the monthly support we need, we are thankful for the one time contributions which meet all our support needs on a yearly basis. Contributions in Thun have been high and because the dollar is also making its way up, I asked the brothers to have a meeting to discuss a decrease of our monthly support from the US. For the first time in years, we are going to have a slight surplus by the end of the year.

Meeting with Two Teenagers of the Church
The parents of Benjamin and Rahel asked me and Lena to do a Bible study with their children on an occasional base. We met to see in which areas the parents would see the need most. They penned down a few topics that may be ideas for Bible studies that are relevant for their children at this age (12-13 years of age).  In October we had a study with Benjamin and Rachel on the topic of friendship at our apartment. We looked at some passages in Proverbs about true friendship. After the study we had some cake and sweets. Our next meeting will be in December.

Book Discussion with Brothers of the Church on Suffering 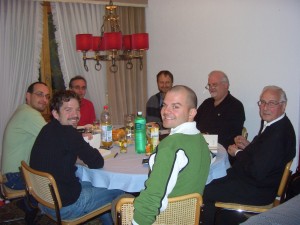 In September the brothers of the church started meeting for a book discussion. My suggestion was to read a book on the theme of suffering. The best available book was in my view D. A. Carson’s book on suffering “How long, O Lord?” which was translated into German years ago. We have done the reading of one chapter at home which we then have discussed in a meeting on Sunday evening. Every brother, except for one, has been present. The theme of suffering also fits well into the church’s theme on serving which I will start preaching on in November. It prepares future deacons and elders among us to reflect on this topic.

Preaching and Teaching on the Old Testament and on Serving
In the months of August, September and October I did an Old Testament survey in church on Wednesday evening. During the time of the survey I preached on ten Sundays on an Old Testament text. Now I am editing the material so that it can be put on our Internet page and downloaded as a course (“With Big Steps through the Old Testament”) by the end of the year.

At the beginning of November I will start a new series of preaching on Serving. This series is more than a one time series because I plan to speak on this subject during 2-4 weeks each fall and winter. What is the goal? It should give everyone in church a sense of being needed and find a place to serve. Included in this series at some point in the future will be the preparation of elders and deacons, our outreach to people (missions), helping the suffering, etc. We begin the series with a vision for the future and a look at the needs in the church and in the community. It surely would be a dream of mine if at some point we could include into this vision the start of a Bible school in the area.

Church News on People
My mother and Elfriede Teuscher turned 80 years old this fall. They are the oldest members in the congregation in Thun. Over the last few months we have noticed that my mother has become more forgetful. We pray for her that her mind will still remember things to live life. Elfriede also has some burdens to bear as she suffers on Tinitus (a constant whistling sound in the ear) on one of her ears. We pray for her, too. Regina Lindenmann (her maiden name is Beyeler) gave birth to a boy. We will continue our Bible study with her and hope that may be some other people that we know in her area may become part of that weekly study. Maria Wenger, 15, moved to the French part of Switzerland for one year to work in a home of a French speaking family. She visits her parents in Thun on Saturday and Sunday of every other week and loves to be in community on Sunday for worship. A few weeks ago Maria wrote a card to one of the members of how much prayers from the church have helped her at the beginning of her time far from home. She has already made up her mind that when she returns to Thun next year in fall, she wants to start an apprenticeship in a bakery.

ministering in the Church of Christ in Thun, Switzerland