Our ten plus weeks in Japan is quickly drawing to a close. In our first report, we talked about the first five weeks of work (five Sundays). I want to talk about what we did during our last five Sundays in Japan.

The sixth week began with a visit to Uenohara Wednesday night. Twice a month there is a mealtime provided at the church building. Two ladies who are members of the congregation help coordinate these meals. What is interesting is that those who come are all relatively new to the area. One couple moved there to get out of the city and grow vegetables and do artistic work. Another one works with urushi, Japanese lacquer. Useful things like bowls or trays are painted up to thirty times to produce a beautiful hard lacquer finish. 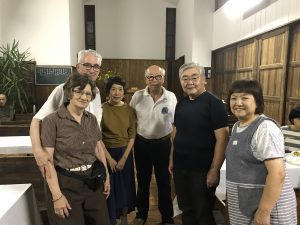 This meal became a reunion of former Uenohara church members. It was so good to see three couples who were members there when we worked with the church 1980-86. We were able to reconnect as older adults. Josephine and I had just turned 31 when we went to work there.

The lessons for the Japan School of Evangelism this year were from the book of Galatians. The book has six chapters so I took each chapter as a lesson for six classes. These were recorded and made available to churches and individuals through the school. Each lesson was about 45 minutes long which fits well for a Bible class or Sunday service.

Galatians is a unique book in that Paul is concerned with these new Christians who are being upset by false teachers. They are being told that simple faith and trust in Jesus Christ is not enough to be a full member of God’s family. In addition to faith in Jesus Christ, they need to become followers of the law of Moses in order to be a full member. This was especially centered on the command to be circumcised. Paul goes to great links to show the truthfulness of his message that faith and trust in Jesus Christ are sufficient. He shows that faith and trust lead to a life that strives to keep in step with the Spirit.

These lessons lasted for three Thursday mornings and covered two chapters each time. The video sessions were well attended. Several former Uenohara members also attended. Each session ended with a mealtime together. What wonderful fellowship!

Our sixth Sunday was spent with the Ochanomizu church. They are currently in a process of reaffirming elders and appointing new elders. I was asked to speak on this topic at the camp back in August, in the sermon, and on Wednesday evenings.

Over four Wednesday evenings, I taught on the eldership. The material, while a review of lessons from years before, was very important. The Ochanomizu church is the only congregation in Japan with elders. Currently, they have four faithful brothers who are leading the congregation. We talked about leadership qualities, the differences in the lists in Timothy and Titus, what qualities are necessary for elders, how to go about appointing elders, and finally about deacons. The classes were well attended. 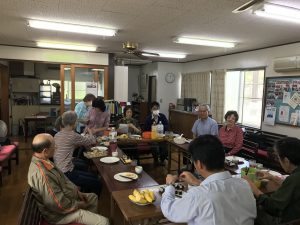 Our next Sunday was spent with the Tomobe church. We went up the Saturday before and stayed with Jeanne Ray. Her husband, Marlin, died in October 2018. She continues with grace and perseverance to serve the congregation that they have worked with for 35 years. This is a wonderful congregation and we are always encouraged when we worship with them. 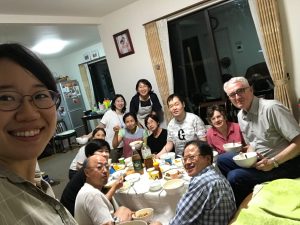 Brother Oh and sister Ryu host a Bible study in their home on the fourth Saturday of each month. Brother Oh is one of the elders at Ochanomizu. We were able to participate in their September meeting. There is a time of praise and fellowship followed by a Bible study together. Following that there is a time for discussion. Then we break out the food Korean (kemchi) is always on the menu. It is always a fun time to be together. Oh and Ryu’s non-Christian neighbors usually attend. 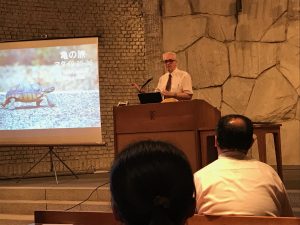 Traditionally I’m asked to speak in chapel at Ibaraki Christian University. The school was started by missionaries in the late 1940s and gradually has grown into a well-respected university. One of the Ochanomizu elders serves as chairman of the Board of Trustees. This year there was a very large number of students who attended the meeting followed by curry rice provided by the Omika church. 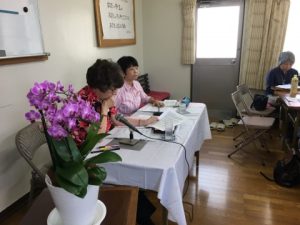 This year Josephine was asked to speak at the 45th Ibaraki Ladies Seminar hosted by the Tomobe church. Forty-six attended from eleven congregations. Josephine spoke from 2 Kings 5 about Naaman and his Israelite servant girl as well as Elisha and his servant Gahazi. There is a lot in that chapter as you think about each person mentioned and their role in the story. Josephine also delivered that same message at the Ochanomizu and Tachikawa congregations.

The last three Sundays we worshiped with the Tachikawa church. I spoke each Sunday which allowed the minister, Naoyoshi Fukushima, to conduct seminars at two other congregations. It is a bit unusual for us to worship with the same congregation for several Sundays. It allows us to come to know the members better and feel more at home with the group. 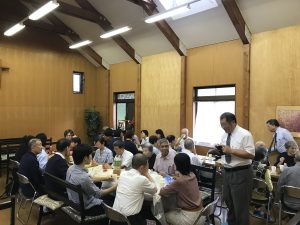 Two days before we left, we participated in the Shizuoka Area-wide Worship. I was assigned to speak from Proverbs 1:7 – The fear of the Lord is the beginning of knowledge, but fools despise wisdom and discipline. Fear of God’s power leads to trust in his promises, which leads to an understanding of his love for us, which causes the fear to turn to a loving, trusting, respect for God. This respect is the beginning of wisdom and knowledge of God and a desire to know him better.

Well, this concludes ten Sundays in Japan for 2019. With the Olympics coming to Japan in late July and early August next year, we prefer to come in the spring next year. This will give us the opportunity to participate in the Ibaraki Joint Worship on April 29 and to attend the All Japan Ministers’ Meeting in early June.

We remain ever thankful for the opportunity to minister in this way each year. Thank you for your interest and prayers on our behalf. It is always our prayer to be an encouragement to everyone as well as a means to come to know our Savior better.