Our financial support is becoming more and more difficult. We need your financial support now more than ever. In the additional report (attached to the same E-Mail as this newsletter), we inform you about the financial difficulties. In short, we struggle with the low dollar, the low monthly support, and the continuing search of another overseeing church.

In this newsletter we want to inform you about the actual mission work and challenges that have occurred in the past two months. We can hardly cover all of it as so much happened. 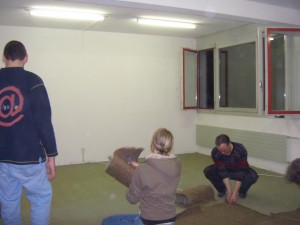 Moving out of old building.

We moved out of the church meeting place at the end of February where we had assembled as a congregation for the last fifteen years (see pictures of our move). The church meets now in two different places. On Sunday morning we assemble in a restaurant close to the centre of the city. The restaurant has a room on the first floor for special occasions in which we meet for worship. On Wednesday evening we currently meet in a building of a “women’s association.” Our experiences in the new meeting places are largely positive. We understand that personal evangelism is more important than ever before because the meeting place is only known by people that we tell and by those who found information about it on the Internet. We even removed our advertisement in the newspaper among churches in the area, which costs over $150 a month. We would like to put later an ad in the newspaper again where all the different churches in the area are listed.

The children are taught in members’ homes during the sermon. They leave the assembly after the Lord’s Supper. Somehow they feel separated from the church. I am encouraging the family who has two children at the age of twelve and thirteen to bring them from time to time to listen to the sermon and later come to every sermon. 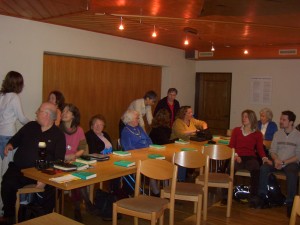 We are working on cutting the budget for room expenses even more in the future. One way to do that is to meet as often as possible in the room of the “women’s association” which is the least expensive place to rent, but we cannot rent it every Sunday. The other way to cut room expenses is to start having our Bible studies in private homes. As long as less than 20 people attend Bible class on Wednesday evening, we manage to crowd in private living rooms. We do everything possible to cut our budget and to become more self-supporting. The church continues to grow slowly and will in time also increase the weekly contribution, but that is a long term goal.

I had reported that Regina Beyeler moved to another city to get married to Peter Lindenmann. She did officially get married in February and the wedding feast will be at the end of May. We congratulated her to her marriage. Her last name is now Lindenmann.

We received news from her a few weeks ago that she no longer attends worship service in the Church of Christ of the city where she moved to. According to her she was asked harshly to speak out in front of the congregation because she had told a lady sitting next to her that she was afraid of the leadership in the congregation. Later that lady told the leadership. One of the leaders urged Regina not to stay silent, but tell the whole congregation about what she had told the other lady. Regina was not able to give even a sound from her lips because she was scared. Another time earlier she had gotten in trouble with the leadership because she was going to travel with one of her friends over the weekend. The leadership told her that there were only two reasons to miss the assembly of that church: either you are sick or work. Vacation would not be an acceptable excuse for being absent.

The congregation in Thun sent a letter to that congregation asking what happened. Their response was that they were not going to tell us. The matter would concern only the Church of Christ of that city and Regina. At about the time we sent off our letter, Regina received a personal letter from that congregation. As she read it out aloud to my parents, Lena, and I, she started weeping and stopped reading. Lena offered her help to finish reading the letter which she did. In the letter Regina was asked to see her faults and repent. It was also pointed out that she had lived with her boyfriend in the same apartment, with separate rooms, for a few months. Regina indeed did that and when the leadership had talked to her about that clearly unwise action, she repented. In the letter her behaviour to repent was strangely not put in a positive light because she should never have moved to her boyfriend it in the first place. The church did not point out that Regina was willing to learn and took action once she did understand that she should not have moved to her boyfriend. In the letter she was put as a bad example for the youth of the church. In short, Regina does not want to go back to that church.

What are we doing? We cannot and should not leave her on her on. We suggested to Regina to worship in Thun every Sunday, which takes her by train about 90 minutes or more to get to the assembly place. On Tuesday evenings we would have Bible study at her home. She agreed happily. There are two groups from the congregation in Thun that visit her on Tuesdays. In one group are my parents, Lena, and I. In the other group are Peter and Kornelia Gugger and possibly someone else. Please, pray for this very difficult situation.

Phil Slate Teaches Seminar on “The Transmission of The Faith”

Phil Slate was the speaker of our yearly seminar in March this spring. He spoke on missions. The title of the three and a half day seminar was “The Transmission of the Christian Faith.” The number of people who attended the seminar this year was slightly lower with 20-25 participants, depending on the day. Some people that we had other years could not attend, but we also had one or two new people this year. Phil Slate gave some good insights on mission methods. My hope is that it will somehow help to develop our mission strategies in Churches of Christ in Switzerland. I am a strong believer in small group mission efforts at people’s homes which is more personal and has the advantage of focusing the teaching on the need of the few in the group. 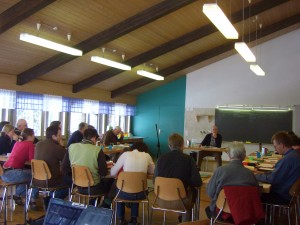 Seminar at Eriz with Philip Slate

Grace and Peace,
Ivan + Lena Voser, ministering in the Church of Christ in Thun, Switzerland

Please, send any one time or monthly funds to: