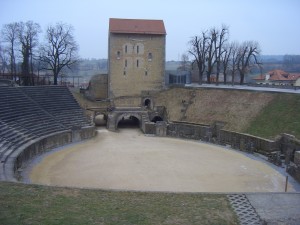 A Roman theatre from the first century where gladiators fought against other gladiators and against wild animals. The theatre is located in Avenches which is about 45 minutes from Thun. The city was probably built by Germanic tribes after they had lost a battle against Julius Caesars' army South of Geneva. Julius Caesar was assassinated in 44 B. C.

We have planted seed over the last few years. At this time we see some fruit growing and wait patiently for the harvest time hoping to eventually reap the fruit that was planted. In this newsletter I would like to tell you of some people whose fruit becomes visible.

Margrit from the Home Bible Study Group Worships now with Us

Margrit, 62, has been a contact for the last two to three years regularly attending the home Bible study at my parents’. She is one of two ladies who have attended Bible studies, the other lady is Johanna. First Lena and I were with the group and I was teaching before getting involved elsewhere. Since the end of December Margrit started attending worship on Sunday morning. She had been prevented to attend by her husband before, but an event in their marriage has changed her mind. She noticed that her husband got involved with a foreign woman giving large sums of money to her (taking the money from the mortgage of the house) to keep his lady lover silent. It resulted nearly in a marriage break up. After finding out about it, Margrit was no longer willing to be prevented from coming to worship service regularly. 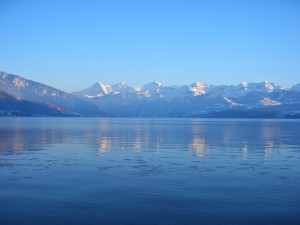 A view from the city of Thun towards the Alps. You can see the famous mountains Eiger, Mönch (monk), and Jungfrau (virgin).

We are also glad about James, 49, who used to be an Atheist. He and his wife had lived near London until September 2007. We were assisting the couple as they were looking for a home in Switzerland. They finally moved into the Thun area (more exactly the Interlaken area). Martine had been a member of a Church of Christ in England. James, however, was an atheist until a few years ago. During the time they have worshipped with us, James continually grew in his faith. A few weeks ago he had his first praying experience in one of our small prayer groups that meets once a month. He was happy about it. James is an intellectual type of person who graduated from an Oxford related University in England, studying engineering. He first seemed to try to grasp God only with his intellectual mind. Now we see that in addition to that, he is being shaped by his mind and heart to become a believer. He is not ready for baptism, but it may be possible that before the end of the year he will be willing to surrender his life to the Lord and be baptised to be a new creation in God. We certainly hope that and pray for it.

Christine Moved from St. Moritz, Switzerland, Back to the Thun Region

Christine, 42, got in contact with the congregation in 2005. First I led a Bible study at my parents’ home where Christine attended. Christine responded as the only person for the home Bible study group for which we had a newspaper announcement. She was experiencing a burn out and we were able to help her in that difficult time. In 2007 she moved to St. Moritz where she worked as a waitress. St. Moritz is one of the tourist places in Switzerland which are known world wide. During that time she was not able to attend worship. She sometimes was lonely, she missed her children, and she missed going to worship. She experienced a totally different world of glamour and excess in St. Moritz. In December she moved back into the area and started some kind of office related apprenticeship in Bern. The church is glad to have her back. She would like to invest time and effort in learning counselling skills. 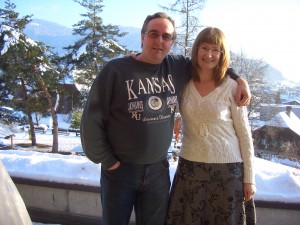 Why did we make the decision to purchase the apartment? Can missionaries afford that? Lena and I were first convinced we could not afford it. During the month of August we looked at different apartments in the region. We were surprised at the high apartment rent at each place. The only apartments that were in our budget plan were unsatisfying. Either they had small bedrooms where you could not put much more than a bed and furniture in it or you would have to miss out on a dishwasher. Some apartments needed renovation, but the owner did not have this intention and still wanted to charge considerably for it. As we were talking to my parents about that, my father started to calculate how much we would have to pay a month for a mortgage. It became obvious that this nicely renovated apartment of my parents’ would not cost more a month, if we purchased it than to live in a small and bad four and a half bedroom apartment. In addition, my parents were glad to sell the apartment to us (they had been looking for someone to buy it for six months). It is a large and newly renovated apartment. The recession will help us make the purchase much more affordable.

Lena and I became home owners on January 1 2009. We believe that God wanted us to buy this apartment and all things pointed us into this direction. We regard it as an act of God’s grace to give a missionary couple with a missionary salary an apartment on their own. Once we pay off a basic debt, in ten years, we will live in this apartment on low cost. It is really a future investment which will help relieve too much financial burden on this small church, as it cannot offer a larger salary for their evangelist and missionary.

Regina Lindenmann (formerly Beyeler) gave birth to a son on December 3. His name is Robin. At first he experienced breathing problems, but is now doing well. At the beginning of January her husband had to leave for several weeks for New Caledonia. He had finished his dissertation about this island in December and had to take a group of students there. He is a good husband. Unfortunately, he does not want to join our Bible studies in Basel yet.

Please, send any one time or monthly funds to:

Ivan + Lena Voser, ministering in the Church of Christ in Thun, Switzerland