On May 24 Maria, a teenage girl, was baptized. This is very exiting news two and a half months after the baptism of James. The church met this time in the indoor swimming pool in Heimberg near Thun because of a renovation of our traditional pool. Just as always for baptism we met at 8:00 on Sunday morning at the swimming pool. 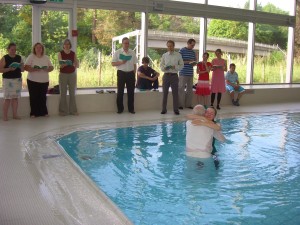 Maria is the youngest daughter of Ruedi und Regula who have been believers since the early nineties. Ruedi and Regula are both elementary teachers. Maria is their first child to be baptised. Her older sister Anna, 19, participated at her younger sister’s baptism. Matthias, 18, is the older brother of Maria.

Maria has just turned sixteen past March. Since last summer she has been working as an au pair in the French part of Switzerland near Geneva. Quite a few young women in Switzerland move to the French part after ninth grade for the purpose of learning French for one year. The end of mandatory school is the perfect moment to do a transitional year to practice the French language which is studied in school from 4th to 9th grade. Since August of last year Maria has been living and working at a family’s home. At the end of June she will have finished her work as an au pair and will start an apprenticeship as a pastry-cook. She has already been able to find a job in Adelboden, a famous Swiss resort place. The village is located in the depth of the mountains which is called the Bernese Oberland about forty five minutes to an hour from Thun. The apprenticeship will start at the beginning of August. 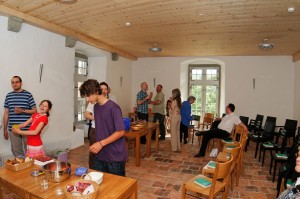 We continue to meet at different locations in the city of Thun and Steffisburg. In the last few months we worshipped in the elderly home in Steffisburg where my parents live, but the capacity of the room is quite limited. The leadership of the elderly home asked us to look for another meeting place since in their view we are too many people and therefore a disturbance for the elderly home. In the next three months we will worship at two different places in Steffisburg. The first place is the Pöstli where a women’s association let us use a room on Sunday mornings and Wednesday night, when it is available. The second place where we meet is the Höchhus which is three hundred feet from the first meeting place on the opposite side of the street. It is a building that was built over the fortress of Steffisburg, Stevansburg, which used to protect the people of the village in the Middle Ages. The downside of this place which makes it too expensive to become our regular church meeting place is that it can not be rented for less than one day. As inconvenient as it may be, the church needs to continue to be moving from place to place. 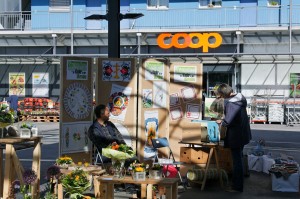 Ruedi and Regula stand at the booth to help Ukrainian children

On May 23 and May 30 we continued our exhibition benefiting children in need who live in the Ukraine. Different church members volunteered to stand at the booth in a nearby village for half a day. The location of our booth was between two major shopping centers (COOP and Migros) in the village of Uetendorf near Thun. The purpose of the exhibition was to sell art objects made by Ukrainian orphans and other children. We gave an opportunity for people to donate money for these children or buy art objects that they had made. The first exhibition was on April 25 about which I reported in more detail in the April newsletter.

Lena’s pregnancy continues to go well. Of course, she has felt symptoms that other pregnant women feel such as tiredness and not feeling well. However, Lena and I are really glad that everything with the baby has gone so smoothly up to this time and the baby seems to be well off. Marianne joined us in the home Bible study group at Regina’s home where we currently study the book of Acts every two weeks. Marianne is a retired lady who used to attend the church of Christ of her city, but because of some problems with the congregation there she has attended the church in Zurich for the last twenty years which is about one hour from the city where she lives. We are glad that she joined us for the regular study of the book of Acts.