Lena and I have made another trip to the Ukraine this summer before Lena is expecting to give birth to the baby in November. Besides spending vacation in Bila Tserkva, we were also involved in mission efforts in Lena’s home church. What this mission involved, I would like to talk about in this letter. I will start the letter with a highlight in Thun before we travelled to the Ukraine. 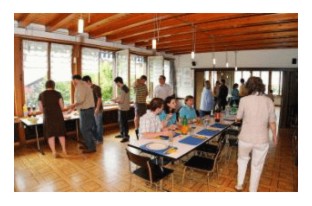 On July 12 my brother René was invited to preach at the Sunday morning worship assembly in Thun. After the assembly we had a fellowship meal. We had almost the whole St.Gallen church with us that day. There were present from St. Gallen my brother’s wife, Brigitte, their daughter Anja and her boyfriend Andy, a regular visitor in the church in St. Gallen. Also, we enjoyed the fellowship of a young man, Marco, who was baptised a few years ago and his girlfriend, a visitor to the church in St.Gallen. At this time the congregation where my brother works has a membership of almost ten Christians. My brother and his wife established the congregation in St.Gallen in 1995 after my brother had graduated from IBC in Florence, Alabama. The congregation in Thun was paying nearly all the cost of living during that period of time. There were no school fees to be paid for the study at IBC. We were encouraged by the fellowship with many of the members of the St. Gallen church that day and I hope that we were an encouragement to them.

Vacation and Ministry in the Ukraine 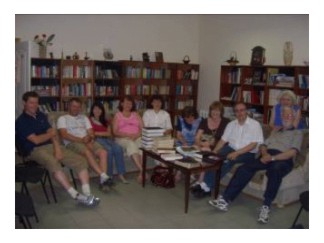 As always we stayed at the one bedroom apartment where Lena’s mother has been living since Lena was a child. I preached on two Sundays and taught two Wednesday night Bible classes in the congregation in Bila Tserkva. Lena translated my lessons into the Ukrainian language. We were glad to meet Joe and Betty Cannon from Memphis, Tennessee, who have been putting a lot of efforts into this church plant visiting it once a year. The church now has a remarkable library with thousands of books and hundreds of video cassettes which is in part due to the efforts of Betty. 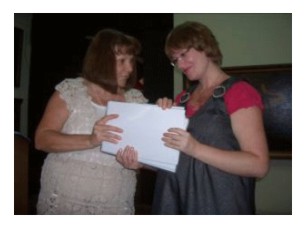 Certificates handed over to Lena at the Press Conference.

Lena and I also submitted the collection of money from the exhibition in Thun to the chief of an organisation that helps orphans and Tschernobyl victims. The total sum of money was 810 Francs which is about $700. In Addition, we brought clothes that Martha, 62, had knitted and caps that my mother, 80, had made. The chief of the aid organisation was very grateful and invited us to visit several orphan homes so that we could see where the money is donated. She also invited us to attend a press conference where, besides a few newspaper reporters, some 50–100 people were present. Lena and I were honoured with a medal of honour and we were given certificates of appreciation for all the church members that participated in helping at the exhibition. Lena and I were asked to speak to the crowd at the conference. My comments focused on the purpose of such a conference. It should especially be done to honour all the children that need help and to honour God who has given us hands and feet so he can use us as his instruments in reaching out to these children. I was glad to give a short message to point people to give honour to God. Lena was making some closing comments after that and thanked for everyone’s help and efforts.

My father had an operation on his hip because of a broken bone. All went well and my father recovered quickly. Regina announced that she is pregnant and is expecting her baby at the end of December. Her first child, Robin, was born on December 3, 2008. Martha retired this summer, but she will continue to work one day a week in the large grocery store Migros for a few more years. That will help her to pay her bills.