We have just finished our sixth Sunday in Japan. This marks two-thirds of our stay here. It has gone by very quickly, but we still have a number of things yet to do.

Worship with the Hachinohe (Jpns) and Misawa (miltry) congregations, Sept 27 '09.

Today we worshiped with the Hachinohe Japanese and the U. S. Misawa military congregations. It was a very good worship time and a good time for fellowship afterwards. One of the main member’s wife became a Christian due to the influence of some people at the Misawa base and the minister of the Hachinohe congregation. She in turn influenced her husband who was baptized on the Misawa base. 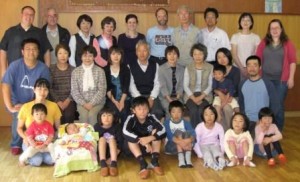 The Sunday before, September 20, we worshiped with three congregations in the Tohoku (north east) area of Japan – Sendai, Morioka, and Hachinohe congregations.  It was so good to get out of Tokyo into nature! The speaker, a graduate of JSE, gave some good lessons related to family.

Monday, September 21, was the 20th Annual Founding Lectureship for the Japan School of Evangelism. I could not believe that it has been twenty years since the school was started. One of the graduates spoke at the Tohoku retreat I mentioned above. Another is working in campus ministry at Ibaraki Christian University. There is currently one student who lives in Okinawa.  Once again the Park Avenue congregation was mentioned in comments during lunch and in several prayers as being very instrumental in helping the school get started and encouraging its continuation. 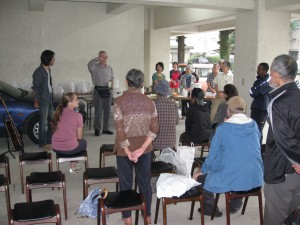 Sunday, September 13, we worshiped with the Mito church and stayed with one of the elders of the church. The day before we participated in a ministry they have started with the homeless in the area of Mito. I was called upon to speak about fifteen minutes after I arrived Saturday. It was good to see them reaching out this way, but there is always concern that it does not end with service. There needs to be proclamation and long term assistance as well.

Sandwiched in between these events were visits with friends in Utsunomiya, time with the new missionaries in Haruna, a ministers’ meeting in Yokohama, completing lessons for the Ochanomizu and Tachikawa congregations, and a lot of preparation for the classes and sermons yet to be given.

Thanks again for your support and prayers. Josephine and I both have been doing well. We’re thankful that the weather has not been as hot as it usually is in August and September. God is good all the time.