Lena and I are about to come to a major turning point in our lives: the birth of our first baby. We know in theory that everything will be different. In practice we cannot quite imagine how different it will be. November 29 is the due date for our baby. Anxiety and joy are part of what we as future parents are now experiencing.

Speaking at the Annual Men’s Retreat in Germany 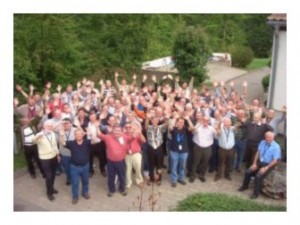 Participants in the Men's Retreat 2009 in front of the retreat center.

This year’s men retreat was focused on Agape. The Church of Christ in Stuttgart, Germany, organised the retreat for this year which took place from September 21 – 25, Monday-Friday. They successfully revived the retreat so that this year approximately 80 men attended, which means that compared with last year the number of men at the retreat nearly doubled. I was invited as one of the speakers. The title that was assigned to me for Thursday evening was at the same time the subtitle of the whole retreat: “he loved them to the end.” Before I began to speak, the brothers from Stuttgart acted the scene of Jesus with his disciples inclining at the table in the upper room and eating the Passover in the night of Jesus’ betrayal. The focus was, of course, on the foot-washing scene which followed the meal. It was an excellent introduction for my speech in which I tried to flesh out the story as Jesus responded to Peter’s objection to wash his feet. I then gave a historical perspective and tried to show how we may take this passage today and give it relevance for our situation in our churches, as we serve one another in humility and love. 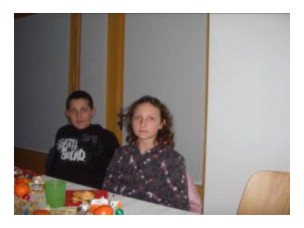 Two of our teenagers: Benjamin and Rahel

Presently, we have several close contacts with outsiders. Unfortunately, Ueli, 20, has not attended worship service during the last few weeks. Ueli is the next door neighbor of James and Martine Ferguson. He often visits them, when he has a question to ask about the Bible. They live about 40 minutes from Thun in a small village near Interlaken. Ueli is about to leave to go to the military service for a few months.

We still have four teenagers in church that have not submitted in baptism. Some attend the worship service often, others only occasionally. The teenagers are Anna, 19, Mathias, 18, Benjamin, 14, and Rahel, 12. I and Lena have held a few Bible studies with Benjamin and Rahel during their school vacation time this year. Maria, 16, was baptised in May of this year. She is the only one of our teenagers that has so far submitted her live to Christ through baptism. 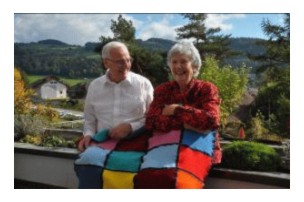 My mother and father on the balcony of their apartment with a colorful blanket on their lap that my mother made for our baby.

My mother, who is the oldest member of the congregation, turned 81 years old on September 23. She is still in a fairly good health. Since July 2008 my mother and father have lived in a senior citizen home in Steffisburg. Our three pregnant women in church (Lena, Regina, and Andrea) are now all in their second part of their pregnancy. Lena will probably be the first of all three to give birth which is coming up in the next few weeks.