Lena’s pregnancy continues to go well. However, we received news from her mother who lives in Bila Tserkva, Ukraine, that she has cancer. After a successful operation, she is now undergoing chemo therapy. Lena’s mother asked us to pray for her.

Four People from the White Station Church of Christ Visit Us 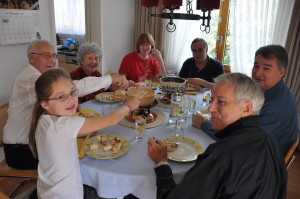 Our guests enjoy a cheese fondue with Lena, me, and my parents

Jack Bond and Richie and Buffy Lynn with their daughter Audrey from the White Station Church were in Thun from October 10–14. On Sunday Jack presented a lesson. After the worship service the church had a fellowship meal. Lena and I were also glad to be able to show hospitality to our four visitors.

It is the third visit from a supporting congregation this year. All three churches (Park Avenue, White Station, Pickerington) intend to support the mission work in Thun on the same level or even with a greater financial commitment in the next year. We are thankful for that, but at the same time we are doing everything so they can lower their financial commitment over the years. 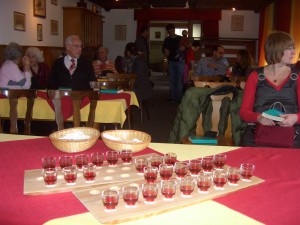 My intent to cut down the cost on the old meeting place in the Höchhus did not work. We continued paying rent for the whole day and not just for the two hours of worship. As a result, we decided to look for another assembly place. We found one in Steffisburg near the city limit to Thun which is more affordable to us. The room is in a restaurant that is closed on Sundays. It will be another transitional place where we will probably stay for a few months. On Wednesday evening we can continue to meet in the Pöstli, though we will not be allowed anymore on Sundays. The church is glad about the new meeting place which fits better our budget.

Fall Series of Sermons on Serving

In October I preached four sermons on “Serving.” The lessons focused on our three short time goals: discipleship, evangelism (in the region and abroad), and benevolence. My first sermon was a call to serve one another and the community. In one sermon I focused on deepening our commitment to the Lord and to the church as his body through which we experience growth in the Spirit.  Another sermon was on the issue of how evangelism and benevolence should be part of a churches’ work, though different churches take a very different approach. In my last sermon I made some suggestions how we as a church could expand our efforts in evangelism and how we could do some regular benevolence work. On December 16 and 23, Wednesdays, we will discuss our efforts on how to expand our efforts on evangelism and how we will be involved in benevolence work.

Peter loses his job by the end of the year as a result of the recession. The unemployment rate in Switzerland is at 4%. If one includes the people who have lost their jobs more than two years ago, which are not counted in the statistics, 8% of the people are without a job. Mathias, 18, returned from his two months stay in Buffalo, New York where he stayed with our friends Alex and Nicole Tullis. Nicole is a daughter of Kornelia and Peter, who lost his job recently. Since the home Bible study group at my parents was stopped, Margrit started coming to the Wednesday night Bible class. Johanna has this same intention.