During the whole month of November we were eagerly expecting the birth of our son. On December 3 at 8:27 in the morning, the time of waiting came to an end and the baby was delivered safely. His name is Ilja which means “God is Yahweh.” Ilja is the Russian version of Elijah in English. We are glad that the birth giving went well and most of all that our son has been well off from the first day until now. 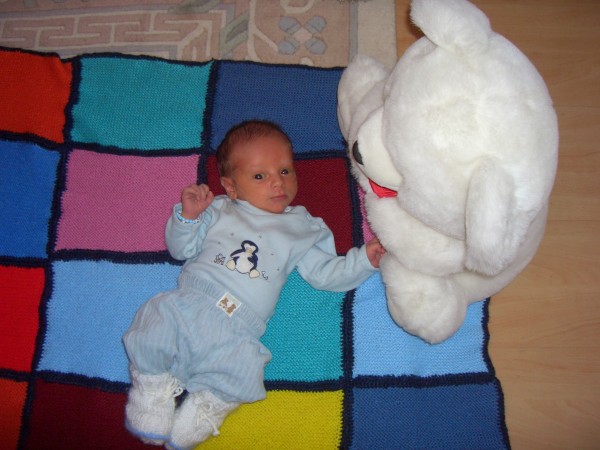 The three days before Ilja was born, I was in bed with fever, a hoarse throat, and coughing. On the third day, Wednesday the fever disappeared, but the other two signs of illness did not. However, I felt good enough to accompany my wife to the hospital. On Wednesday evening when the pains became more regular, we knew that the birth would only be hours away. On Thursday morning at 12:30 a. m., we decided that it was time to drive to the hospital and get ready for the birth process. Seven hours later Lena gave birth to our son who was 3 kg 290 gram and 50 cm in length at birth. The baby boy seemed so small and fragile that I wondered whether I could touch him (and because I was still coughing). Lena stayed in the hospital until Monday, December 7. Since she has been home, every few days a midwife came to our home to check on the development of our baby, the cost of which is paid by our insurance company. Ilja was at first in danger of jaundice which is common to newborn babies so we tried to expose him to daylight and even better sunlight, but he is safe now. We can say that mother and baby are doing well and for this we are thankful to God.

"Stop, Yes to the minaret ban."

On November 29 the Swiss people voted with a percentage of 58 % clearly against the building of minarets. This will prohibit the building of any minarets, towers, next to a mosque.  The countries of the European Union and probably many other countries around the world were shocked at the decision of the Swiss people. This stand generally is seen as an act of intolerance against Muslims. I see it more as a sign of fear of the Swiss people. Strangely this fear is high in a time when Muslims are no longer growing in number in Switzerland. On the other hand the two state churches, Catholic and Reformers, are loosing a lot of members each year and they are still the churches that represent Christianity in Switzerland. My hope just is that whatever happens, it will serve that Swiss people wake up from their spiritual slumber and seek God, Yahweh, again not in a dying State Church, but in a living community like our congregation where the risen Lord is present and changing and molding his people.

As I minister to the church and the community around, I am impatiently waiting for a time when my ministry will see more open doors than now. What new doors may open? I can especially see a growing community of immigrants who will shape my future ministry. Switzerland is becoming a melting pot of all ethnic groups. Half of the doctors and nurses in Switzerland are from Germany. We have a growing population from Italy, Portugal, and even the US. We also have an increasing number of people from all over the world, especially Asia and Africa, to which this church must find ways to minister. I am excited about the upcoming years and I do have great hope that my ministry opportunities and that of the church will increase.

At the same time I see a need that we as a church work on looking for opportunities to serve. On Wednesday, December 16 and 23, the church tries to take a further step of expanding its ministry to the community next year. I will be glad to share this with you.

Regina caught the Swine flu as well as her husband Peter who teaches at the University of Basel, but they both recovered quickly. On December 17 Regina gave birth to Elena Louisa (more on the baby in the December Newsletter). Margrit continues to come to the Bible study on Wednesday, but Johanna has not managed to come yet in spite of her good intentions. We pray that these two ladies will start attending more regularly and also start coming to the worship service on Sunday.