It is past the New Year and I have not written. I am sorry. We are doing fine. It has gotten colder. It freezes every night, last night 19 and during the day it has been in the low 40’s. Snow or a few flakes have fallen several times, but it has melted as it fell. We have not seen any on the ground, yet.

The church here started the year in prayer as usual. We start praying at 11:30 PM and continue until everyone has finished. I enjoy starting the year talking with the Lord.

The theme for Tomobe church this year is found in Acts 17:28, “For in Him we live and move and have our being.” Japan is a country of 8,000,000 gods. If Paul walked in this country, I think he would also be surprised. I remember this from the first time I came here in 1963. I saw no churches, but idols were everywhere. Coming from Texas, this was a great shock. I remember in Houston a sign coming into the city, “369 churches of Christ to serve you.” There are now about 60 churches of Christ in all of Japan. There are more than 60 shrines to gods here in Kasama. I know of about 10 missionaries and maybe 30 Japanese preachers for 120,000,000 people. Houston, at that time, had a population of about 1,000,000. The problem in Japan is not just lack of missionaries, but a lack of urgency for the lost from the Japanese Christians. I have preached this message for more than 30 years. I hope this year I will be more focused on this problem and can help the Tomobe church to be concerned for the lost of Tomobe and all of Japan. 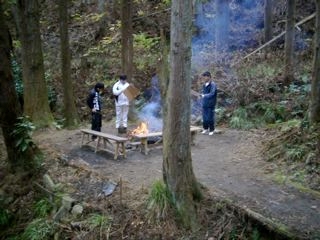 We had our Winter Camp with about 40 attending and 18 spending the night. Some come to work, but they go home at night. Some have to take care of their families and some don’t like the cold. I was warm enough at night in my sleeping bags, but getting up was a chore. My old bones were hurting and my joints were not wanting to bend. After I got moving, I was OK. We started a fire the first thing. We exercised and ate breakfast. Then we began work. The foundation for the new cabin was finished! The old cabin was burned (for the campfire) and other small work completed. I hope we can finish the cabin by this summer. 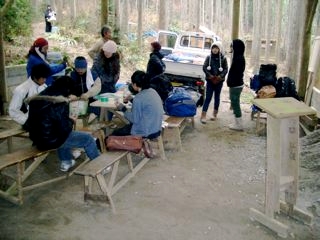 Some of the campers at free time.

I am still working on the small groups. I have been talking to several of the members, encouraging them to want to be leaders. I hope sometime this year to get something started. Some of the members are not excited about the idea, so it will have to be partial at first until we can show how it is done. Keep these things in your prayers and especially for the next item. 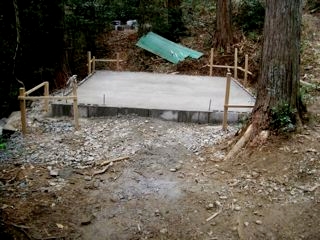 Foundation for the new cabin

I will be going into the hospital on Feb. 2 and will be operated on the 3rd. I don’t think it will be a difficult procedure, but anytime you go into the heart, it is scary for the one whose heart is being gotten into. Jean is on Facebook and will keep updating my condition. It is under “Jeanne Lemm Ray”. If you want to join it is free.

some of the campers at free time

Thank you all so much for all your help. I wish you could all come and see what is going on here.