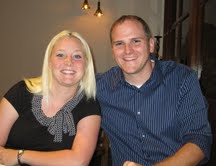 Paul and Stacey arrived in Japan September 2009. They had an interest in Japan missions and gave up jobs in the states to commit to work with the Haruna church of Christ for two years. They are with the Helpers in Missions (HIM) program through the Memorial Road church of Christ is Edmond OK. They both are from Kansas.

The Haruna congregation was started by Shiro and Rumiko Obata in 2003. Haruna is a community in the town of Takasaki in Gunma Prefecture. While the newest missionaries in Japan, both Paul and Stacey have made good progress with the language and have a deep love for the people.