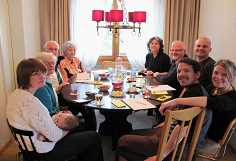 Grillfest planning group at our apartment

In April and May two groups will meet to plan two informal and non-threatening church meetings in July and December for which we want to invite guests. This is a new effort to evangelize and we hope that this helps to make the churchs’ outreach stronger. A third group will be meeting with Peter who has some ideas on how the church could present itself in the future on the Internet and on flyers. The church is ready to take new steps for making the people around us aware of this church.

We pray that with these efforts we will have some impact on people. I will inform you more on these ideas, as they are further developed. We have also put a group together that will meet to come up with a plan to help orphans in the Ukraine. At this point I would like to share with you some developments in our outreach with people that we have been in contact with for a long time and with some recent church visitors.

Margrit and Johanna, which we have known for more than five years, still do not come to church services. Occasionally, they call my parents to talk about different things that disturb them in their churches or in their lives. They both still have not been at our worship service this year and Johanna has never been at our church service. Of course, to not make a decision is also a decision in which one says “no.” They studied the Bible with my parents, some also with Lena and me, for at least four years. My parents stopped their Bible study with them about a year ago and point every time they talk to them to the worship service on Sunday morning and the Bible study on Wednesday evening for which they may join us. They remain indecisive.

We have had a new couple attending the worship service for the last few weeks. Their names are Daniel and Tine with their three year old son Benjamin. They have visited a number of churches during the last few years, but they have missed the emphasis on Bible reading and Bible teaching in each one of these churches. They both were baptised as adults. They seem to feel comfortable at this church. Tine comes from Germany and has lived in Switzerland for one and a half years. She appreciates that we have the worship service in the German language and not in Swiss dialect. Lena and I have had them over to our apartment once where we got to know each other better and we learned something about their Christian background. It seems like they are close in their thinking to what this church believes in and practices, but we will have to see over the next few months if some issues may come up suddenly that make them decide to leave, as we have experienced it many times before. We though have at this time a very good impression on this couple. 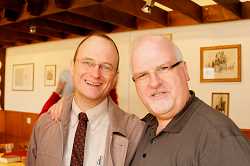 Peter is still unemployed, but he is in good spirit. He uses this time of unemployment in part to help the church with some advertising ideas for our outreach. Elfriede has to continue to take pills for her sick liver. In addition, she continues to suffer tinnitus, a constant sound in her ears, which cannot be healed.

Asking for your prayers:

Any Funds Can Be Sent to Our Overseeing Congregation: