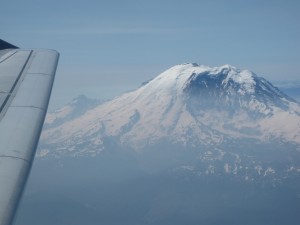 Mr. Rainier, 14,400 feet above sea level, as seen from our plane as it descended to the Seattle/Tacoma Airport.

Our flight this year routed us through Seattle, Washington.  This is a better route since the flight is broken up with 2 hours on the ground between a 4 and half hour  flight from Memphis to Seattle and a 10 hour flight on to Tokyo/Narita.  Both flights were smooth and uneventful.

Upon arriving in Tokyo we were able to board a bus for Tachikawa within 45 minutes of deplaning.  That is remarkable given the walk from the plane to immigration, getting 6 bags and going through customs and then securing bus tickets.

Yoshiya, Emiko, Hannah, and Aito were waiting to greet us.  We only had a very brief time with them before boarding the bus.  Yoshiya is the minister for the Ochanomizu congregation as well as chaplain for Ibaraki Christian University.

The 2 and half hour bus ride to Tachikawa was uneventful with only minor traffic jams.  Sano picked us up at the bus stop in Tachikawa.  We began settling in.  Thirty hours after waking up in Memphis we were ready for bed.  The next few days we will concentrate on setting up housekeeping and preparing lessons.  My first speaking engagement is Sunday (Aug 8 ) with the Matsudo congregation in Chiba where Steve and Debbie minister.