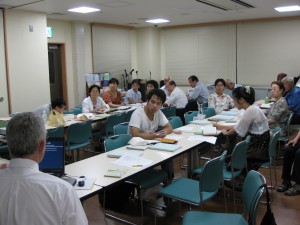 It has been over two weeks since our last report.  We have been busy with classes and visits as well as preparing unexpected lessons.  The classes at Ochanomizu on the Holy Spirit and at Tachikawa on the Aroma of Christ are going well and quickly.  Both topics seem to fit needs which each congregation has at this time.

The Ochanomizu church is in its new building.  It is very nice to have class in a spacious room.  The past three trips we have met in a very small classroom while the building was being built.  The building is eight stories with the church using the top three floors and sharing part of the first floor.  The remaining four floors are used by the Chiyoda Ward government (Japanese Link) as a senior citizen center, rehabilitation facility, and meeting place.  The sidewalk leading from the Ochanomizu train station to the building has been widened and leveled making access to the building even easier. 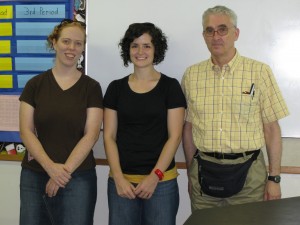 We had the opportunity to visit with two ladies who are now teaching for Christian Academy in Japan (CAJ).  Judith was a missionary working with the Taga church of Christ for a number of years.  Debi was a vocational missionary in Sendai before changing jobs and coming to Tokyo.  They both have a great love for the Lord and reaching out to people.  They are teaching seventh grade – Judith, English, Social Studies, and Bible; Debi, math, science, and Bible.  We met with them for lunch and fellowship.  They had been teaching only two days and were still adjusting to the school schedule. 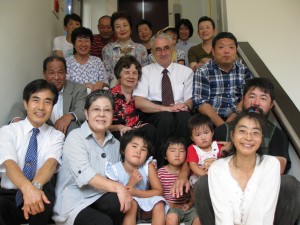 After a wonderful pot luck luncheon with the Sharon church, we headed inland to worship with the Haruna church of Christ in Gunma Prefecture in the town of Takasaki.  What was to be a two hour train ride turned into a three and a half hour train ride as our scheduled train had some trouble and was canceled.  In all our travels over these many years this is the first time this has happened.  We arrived late into Takasaki and were treated to a sukiyaki supper by brother Obata, minister for the Haruna church and former minister for the Ochanomizu church. 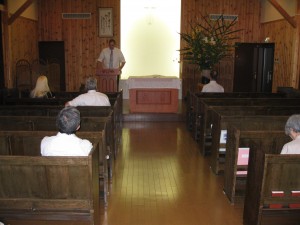 Paul, missionary working with the Haruna church, spoke for the evening assembly.  There was one person who attended.  Evening assemblies in Japan are generally for those who are unable to attend the morning assembly.  Following the assembly we had a time for barley tea and cookies.  We talked and visited longer than the assembly itself.

After the assembly and fellowship time, we went to stay the night with Paul and Stacey.  They have completed one year of a two year commitment through the Helpers in Missions (HIM) program sponsored by the Memorial Road church of Christ in Edmond OK.  During the month of September they are back in the states visiting family and reporting.  Returning in early October they will finish out their commitment.  After that they are unsure what they might do.  We commend them for their efforts as we remembered all the adjustments we made the first year we were in Japan.  We talked well past midnight and tried to encourage them and were encouraged by them.

The next day brother Obata took us all to see the temple where the Obata Family is buried (Hosyaku Temple).  His ancestral family were a powerful regional family in the area, but were conquered by Oda Nobunaga in the 16th century as Nobunaga tried to unite the warring states.  It was an interesting look into some of his family’s history as well as an opportunity to see some pretty scenery in the area such as Mt. Myogi. 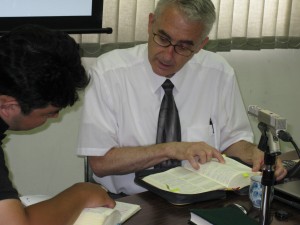 Our fifth Sunday was with the Tachikawa church of Christ.  They asked me to teach a morning Bible class and also an afternoon Bible class as well as the morning sermon.  I taught a class on “What Is Saving Faith?” for the morning class.  I used a section of Evertt Ferguson’s book The Church of Christ: A Biblical Ecclesiology for Today as the outline for the class.  The main point is that saving faith has three parts – assent to a fact or information, trust in the one making the statement, and action or obedience based on that trust.  A question was raised in the Thursday morning class concerning saving faith and its relationship to obedience, i.e., baptism.  This was an attempt to reiterate the fact that baptism is not a work of the believer, but of God because of the faithful submission of the believer.  Understanding of the promise God has made; trust in God to do what he had promised; obedience to God’s command which shows our submissive attitude.  Having done this, then we receive the free gift of God. 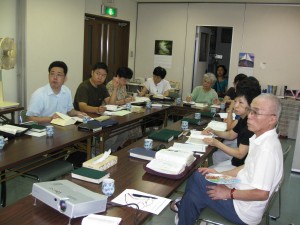 The afternoon class at Tachikawa has been reading through the translation of Renewing God’s People: A Concise History of Churches of Christ by Gary Holloway and Douglas Foster.  At first I was asked to discuss the chapter they were studying.  Then I was asked to address the idea that the instrument was not introduced into Southern churches because of economic reasons.  Thankfully I had done a lesson on this topic before arriving here so I only needed to translate what I had already prepared and have my translation corrected.  The class lasted for two and a half hours with several questions and much discussion following my lesson.  I’m sure this was a totally new approach and understanding of worship music for those present who assumed everyone used the instrument except us.

As I type this on September 8, we are getting some much needed rain from a typhoon.  Josephine and I are also celebrating our 40th anniversary.  The Lord has been very gracious to us and we give Him much thanks for his blessings.