Again it has been a bit over two weeks since our last report.  It has been a very busy time.  The Wednesday classes with the Ochanomizu church and the Thursday classes with the Tachikawa church are over.  Both were well received.  There is always a bit of sadness in realizing that our fellowship with these congregations this year has come to an end and our trip is nearing its end.  But this is tempered with an expectation of being back with family and the Park Avenue congregation.

The first big item during the past two weeks was our weekend in Mito, Ibaraki Prefecture.  We arrived after lunch Saturday, September 11, and spent a good bit of time that afternoon with Joel, former missionary in Sendai, and Keiko, one of the members of the Mito church.  It was good to catch up on information about the church and particularly about Joel’s work and studies since we last saw him last fall.

Joel moved to Mito in the spring and was installed as missionary for the church.  He teams up with Atsushi, minister at Mito, to reach out to the younger members.  Sasha, who is nearing the end of a three year internship, also came down with Joel to work with the church during the remainder of her internship.  She is supervised by Joel.

We learned about the work in Sendai as well as Joel’s new work with the Mito congregation.  This congregation is one of the larger congregations in Ibaraki Prefecture.  Up until last spring they had elders.  Both elders moved away leaving the congregation without elders for the first time in over 10 years.  Joel and Atsushi complement each other and are working into a very good ministry team.

Sunday morning Dwight sat in on a beginners Bible class taught by Atsushi.  A husband and wife were the only ones to come.  The husband had been baptized two years earlier and the wife before that.  Their daughter attended Abilene Christian College.  Through that connection they began attending the Mito congregation.  The class was studying what habits and actions help us grow in Christ.  It was a good discussion class.  Josephine set in on the English Bible class taught by Joel.  They were studying Christian disciplines. 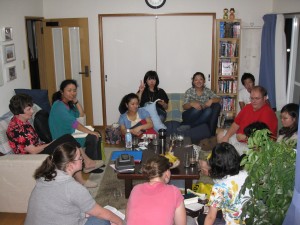 Sunday evening we participated with a small group at Joel’s house.  This was composed of 15 single 25-35 year olds.  After supper together we had a time of praise.  Joel asked us to speak to the group about things which helped us grow in Christ.  We shared some things which we felt had helped us and would help them.  We also spoke about marriage and the importance of  selecting a partner who would encourage them to be faithful to Christ and grow in faith. 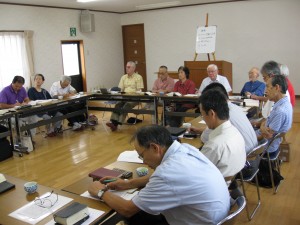 Monday, September 13, we attended the Ibaraki area ministers’ meeting.  There was over 30 in attendance.  Brother Shigekuni spoke about O. D. Bixler and his important role in missions following World War II.  Bixler had done mission work in the Ota area (Nagasawa) of Ibaraki before the war and was well acquainted with the needs in Japan.  He helped established the children’s home and Ibaraki Christian University, and purchased property in Tokyo where the Ochanomizu church meets today. 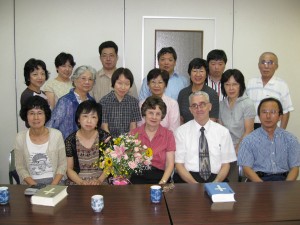 Tuesday Josephine had a class with the ladies of the Tachikawa congregation.  She spoke on what is your identity.  The class lasted for 2 hours and there were many good comments following it.  The guys and Dwight visited together during the class.  Following class we all had a sandwich meal together. 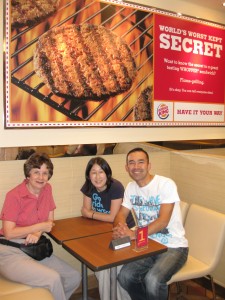 Supper with Kazutaka and Mami 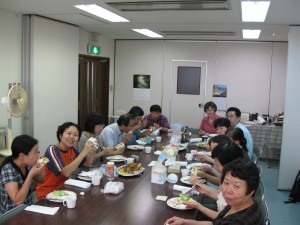 Following class at Tachikawa on Thursday we had curry rice for lunch.  One lady made some ohagi which is a Japanese candy with anko (sweetened bean paste) on the outside of mochigome (sweet rice).  She made three varieties to share with the group.

With classes behind us, we were ready to receive Dr. McMillion Friday, September 17.  Every three years the Park Avenue congregation sends one member to Japan to visit the various congregations and those the church supports to learn about their work first hand and to encourage them in what they are doing.  He will then report back to the congregation.  Brother McMillion teaches Old Testament studies at the Harding University Graduate School of Religion.  Several of the ministers and workers in Japan have benefited from studying with him. 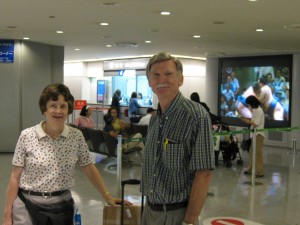 His first day in Japan was spent recuperating from the flight to Japan and bus ride to Tachikawa.  We also had lunch with Nao, minister for the Tachikawa church, and his wife, Noriko.  We ate okonomiyaki at a local restaurant.  That evening he had supper with the Nonogakis.  Both these occasions provided opportunity to learn more about their work. 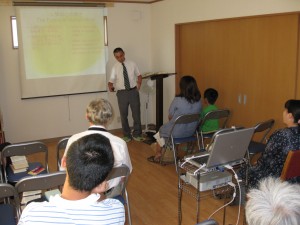 On Sunday, September 19, he attended worship at the Yokota Japanese congregation.  This congregation meets on the second floor of the building used by the military congregation.  They meet together to partake of the Lord’s Supper.  Following the worship assembly we had a very leisurely meal together again learning about the work Masa and Mari are doing in Yokota.

Monday was the Japan School of Evangelism Lectureship commemorating the opening of the school 21 years ago.  Over 50 attended the morning worship/lecture period.  Following that many remained for lunch together.

On Tuesday brother McMillion lectured to an Introduction to Christianity class at Ibaraki Christian University and then spoke in chapel from Psalm 1.  This was followed by a curry rice lunch and time to interact with some of the workers at the Christian student center on campus.  The curry rice meal was provided by the Omika church who also supports the minister for the student center. 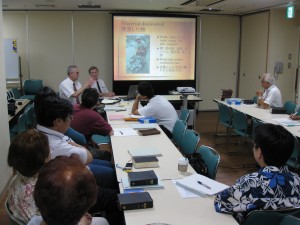