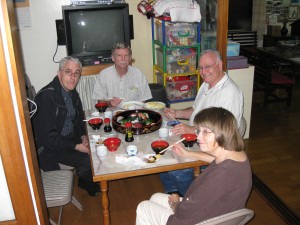 Eating supper with the Rays in Tomobe

We have once again reached the end of this mission trip to Japan, August 2-October 7.   The next to the last Sunday was spent with the Tomobe congregation.  The Park Avenue congregation acts as sponsors for Marlin and Jean Ray, who have worked with the Tomobe congregation for over 25 years.  Saturday (Sept 25) was a full day of activities.  It began with a class from Romans 12 which Dwight taught.  After a bento lunch,  the afternoon began with a time of discussion and question/answer period.  The day was climaxed with an ice-cream social.  Over 30 of those who participated in English Bible classes came.  It was an enjoyable time of fellowship while eating some good homemade ice-cream. 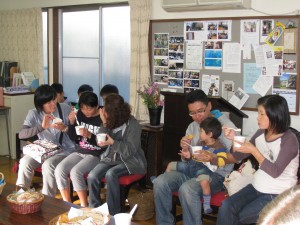 Following the Sunday assembly we had a curry rice lunch together.  The Kimatas came from Utsunomiya to visit us.  They were in Memphis for two years.  During that time Josephine taught an English Bible class for them.  He is a chief surgeon for a hospital and very busy.  She came to visit us in Tachikawa, but he was not able to.  Tomobe is a bit closer to their house so they took the opportunity to come.  It was good to see them and their daughter. 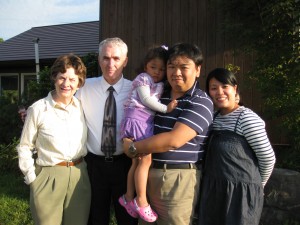 After the Kimatas left we took Phil to a local mall to look around and get supper.  Malls are beginning to spring up in rural areas of Japan.  They provide abundant parking for cars, many different stores in one place, and space to walk around.  It has changed some cities,  making the downtown area less appealing to the younger set.  This was Phil’s last day in Japan.  We put him on a bus the next day for the Tokyo/Narita airport. 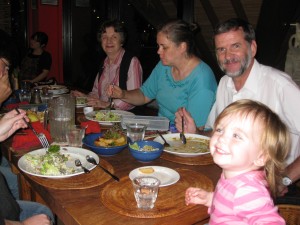 Brent and Sandy Rogers in Kojima

Our last Sunday in Japan was spent with Brent and Sandy Rogers in Kojima, Okayama.  They run an English language school in this community of 75,000.  In addition to the school, Brent and Sandy have worked diligently to plant a church here.

Over the last couple of years they have developed a parenting group for young moms.  They come together once a month to discuss issues related to parenting.  Recently another couple moved to Kojima for the husband to work with a local day care center teaching English.  Leslie and Sara are young parents of a two year old and expecting another child.  Their presence has encouraged this parenting group and also encouraged dad’s to take part in parenting. 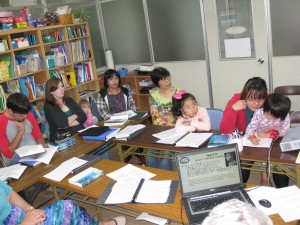 Dwight shared a lesson with the Japanese assembly concerning extra Biblical evidence for Jesus Christ.  These are references to Christ outside the Bible and provide a great deal of information about Jesus Christ which corroborates the Biblical account.  His lesson was based upon a chapter from Lee Strobel’s book The Case for Christ.  The book has been translated into Japanese and copies were available after the lesson for loan.

Sunday afternoon we met for English worship.  There was a men’s and women’s prayer time followed by a joint assembly time to sing and eat the Lord’s Supper.  Dwight shared a lesson from 2 Corinthians with the group, seven in all.

Brent and Sandy would very much appreciate additional workers to come help them.  If you are interested, please write them for more information.

On our return from Kojima we briefly stopped over in Shizuoka for lunch with the Maedas and Ken and Etsuko Hysten.  They work with the Nakada church in Shizuoka.  The Hystens have been working with this congregation for a little over a year.  This summer there were 48 readers for the English Bible classes offered by two teams from the states.  Of these 28 continue to have English Bible studies.  Etsuko also teaches an English/Japanese Bible class for ladies whose English is not that advanced.  Seeds are being sown.

As we repack things and break up housekeeping here at Tachikawa, we look back over the past 10 weeks and review things.  We see areas where several have responded to the gospel and we see many places where the seed of the Gospel is being sown with little visible results.  We pray that God will give the increase.  We are deeply thankful to the Park Avenue congregation for the opportunity to briefly minister in Japan like this.  We are also very thankful for those who help through prayers and support.