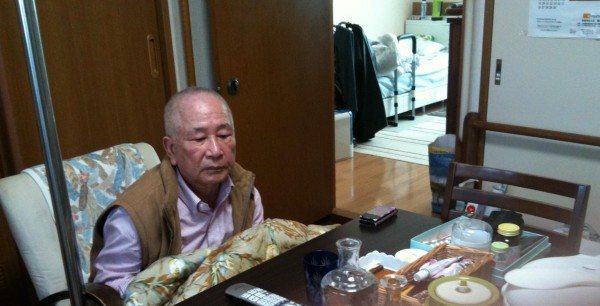 When we had a worship service at my house before the completion of the new building, Mr. Hanabusa called me to ask me about our church.  He was an owner of a small firm and now  is retired.  He has never been told what to do, but always tells others what to do.  He has often said to me, “I will tell Jesus what to do.”   At the new building he kept on coming to the assembly for a couple of weeks, but one day he was so embarrased to go upstairs by holding someone’s hands.   He just does not want to admit he is dependent on someone else…..

Part of his brain is shrinking smaller and smaller.  He has been losing mobilities.  This is a progressive disease.  No cure for it.

I go to visit him once a week.  He welcomes me but he has refused to come to the church.  He is looking for truth and meaning of life.  He thought he could find something in Christianity, but he has not found what he wanted.

He has typed all the New Testament books and read all.  He has often told me that he has to change himself.   At the age of 65, he knows he cannot change himself easily though.