I’ll keep this brief since it’s after 1 AM and it’s been a full two days.

We arrived safely in Sendai yesterday – there were no problems on the highways until we got to Koriyama and then it was pretty full – about five hours in travel. After some lunch, the afternoon was spent in preparation – shopping for work supplies, grocery shopping, organizing and setting up the church building as a place to sleep, eat, worship and become a storage place for goods. Yuko Kawamura (Sendai church member) helped Sasha make dinner, and we enjoyed the meal with Osamu & Yuko Suzuki (Sendai church members) and their kids. Marlin Ray and Niumaia Mataraki also arrived with a truck load of stuff – it was really good they could come, and enjoy a couple of meals, onsen and time of worship with us. 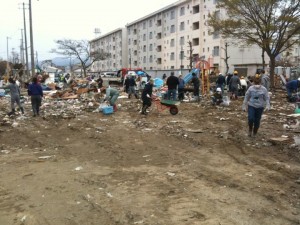 Today was an early beginning – 7 AM breakfast (with prep beforehand for breakfast and packed lunches) and we were on our way to Ishinomaki at 8:30 after packing the vehicles with supplies and having a prayer time this morning. Again, things weren’t as crowded as we expected until we arrived in Ishinomaki itself. It was a little shocking to our group to see the disaster area beginning at Sendai airport. We met up with Chad and his group, and worked in the neighbourhood where we distributed stuff last time. This time, we worked from 11 AM – 4:30 PM on cleaning part of park with playground equipment for the children. Just as we’d pick up one layer, we’d discover another layer of stuff, and the smell is becoming worse. An 8 yr old girl named Yu laughed with glee as she could climb up and ride down the slide. I saw how long it took a large group of us to clean a portion of a park, and then thought about how vast the destruction is. Our work won’t be done anytime soon. In the mess I found a package of pictures that were okay, and as I looked at the pictures of smiling faces with a baby, I wondered if the owner of those pictures is still alive? 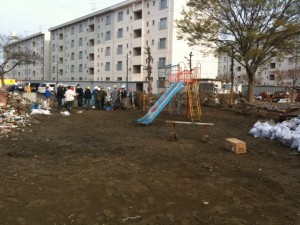 Afterwards, we went to another nearby neighborhood to disttribute all of the food we brought. Chad, himself, was surprised at the number of people who showed up. A couple of people cried because they were so happy and thankful to get some fresh vegetables. By 6:30 we were on the road back to Sendai and by 9:30 we were all bathed and ready for dinner and our daily devotional time. Most of them are now asleep and I’m on my way too – I feel tired but satisfied about the day.

If there are three things I am sure of in these first couple days, it’s this: 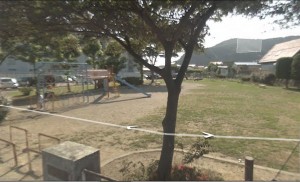 Park before earthquake and tsunami

There is so much more to share, but I am really exhausted (falling asleep as I type this). I’ll write more later.

Thanks for you ongoing prayers,