It’s been another 2 days, so I thought I should send another brief update of what has been going on here, and how we have seen God at work.

Yesterday, our group was able to connect with Mito Church by Skype – that was fun…especially having the neighbor children climbing on my back and saying hello. Our time of worship was blessed – three members from Sendai gathered to worship and commune with us. Gaku shared about Job’s story and helped to give us context for what we (and others) are facing from Job’s example. After lunch and visiting, we broke up into three groups – two groups (Group: Joel, Sasha, Gaku, Emiko, Allen; Group: Toshi & Akiko) went to visit others in Sendai, and the third group (Brett, Hiro, Kendon, Brad & Koichi) went to purchase more work supplies. Keiko spent the afternoon/evening with Toshiko, one of the Sendai Christians, which I think was really encouraging. Yuko also came back to join our devotional time.

Our group was able to visit people in the neighborhood we used to live in. One neighbor, Reiko, hugged me and hugged Sasha many times and cried. Sasha said she felt like God led us to Reiko’s house. We also met with my former Japanese teacher, and with my longtime friend. Each time, God blessed our conversations. A highlight of yesterday was a time of sharing Gaku, Hiro, Toshi and I had at night. 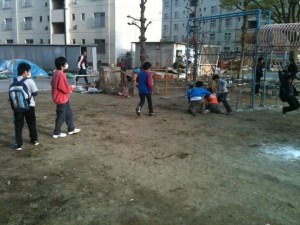 Playing in the park

Today was another full day of work – leaving Sendai at 7:30 AM and returning at 8:15 PM. The strong wind made all work incredibly challenging. Working again with many others, we helped to complete the task of cleaning the park. Seven of us were sent by Chad to help start a new ‘drop’ point in a neighborhood where they helped a lady with cleaning out her home. The 7-11 allowed us to use their parking lot. We estimated that we were able to distribute goods to about 175 people in 2 hours. It was such an encouraging day: to see children playing and laughing, and relationships being formed. A barbecue was hosted in the park, and for a moment it seemed like people were able to set the difficulties aside. Personally, I enjoyed playing with several of the children, and getting to know a few of the neighbors. I met a guy named Shin, who is the same age as me. He told me that his wife is tired and stressed, and that his children have been affected by seeing many dead bodies, and filled with fear by the tsunami. They are living with his parents because their house was completely damaged. He asked me to come back to see him, and repeated that request three more times in the conversation. I also met a high school boy, named Yuya, who loves to study English and enjoys sports. He lives with his mother, and apparently he had to help carry the bodies of those left by the tsunami. Finally, I enjoyed playing with Takuma, Kota, Rin and Yu. Takuma was especially affectionate and tried to convince me that his mother would be okay with me driving him around ‘anywhere he wants’ in my big van. Hmmm. He wanted me to promise to come see him and play with him tomorrow.

We have now distributed at least 2/3 of what we brought with us on this trip. People are struggling to survive.

We are so appreciated of the words of encouragement, and the ongoing prayer coverage for us and for those we meet. I have incredible respect for Chad, and Beth, and so many others. I also love my team and I’m proud of them: their hearts, their spirits, and their willingness to serve in very difficult situation.

I am again struggling to keep my eyes open (I had breakfast prep duty this morning with Sasha and Akiko). Gaku is on one side of me, working on finances and balancing the books. Hiro is on the other side going through pictures and journaling. We hope to get those journal entries and pictures onto our blog soon.

Thanks for you ongoing prayers,