We pray this newsletter reaches you and yours enjoying the blessings of the Lord.

It certainly has been a chaotic time since the March 11th Tsunami and major 9.0 Earthquake devastated the Kanto and Tohoku Regions, in the eastern shores of northern Japan.  There are a number of human stories and events we could share with you.  However, on this occasion I will not chronicle these due to being in somewhat of a time crunch consistent with our involvement in support of the many affected by the disaster and, the need to ensure we continue our day to day work of ministry here in Shizuoka. God willing, I will share some of these accounts with you in the future.  I wish to encourage you to utilize the Mac congregation’s website (www.macarthurchurch.org) for a more expanded diary of our involvement since the major disaster.  With your prayers and financial support, we are making a difference in the lives of many.  We realize it is God Who gives the increase when it comes to adding souls to His Kingdom.  Even so, we want you to know with your prayers and financial support we are doing all we can to render aid on behalf of the church here and Japanese people in general. That aid includes meeting physical and spiritual needs.

We appreciate Richard Shough for taking the time to post our periodic updates on the website.  The elders, ministerial and administrative staff, Missions Committee and you, the congregation at large, are to be commended for what you are enabling us to do for the cause of Christ in Japan.  Thank you, thank you, for the special financial contribution you sent our way.  God is being glorified because of you.  Special thanks too, to the many of you who have sent messages of encouragement, support and love to us during these difficult times.  May the Lord richly bless each of you for sharing with us.

Much has occurred since the Tsunami/Earthquake.  Needless to say, this has been and will continue to be a long ordeal for the country of Japan.  The Friday night of the Tsunami/Earthquake was extremely difficult.  We spent most of the weekend huddled on the third floor of our home for fear of a tsunami hitting our area.  The authorities continued to issue evacuation orders; however, the roads near our home were closed so there was no place we could go.  By God’s hand the tsunami they feared did not come to the shores of Shizuoka. After what seemed like an eternity of waiting, the earthquake and tsunami warnings finally let up. 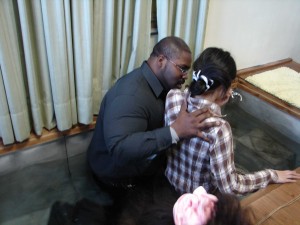 The following Sunday morning, God allowed us to be able to go to worship.  I preached on the brevity of life and how important it is for us, as His people, to establish a secure relationship with God, which leads to eternal life.  Following the service, I was blessed to baptize Anna Ishikawa.  Anna just graduated from high school and began attending Chiba University in April.  We have been studying with Anna for almost two years.  The week earlier, following our weekly Bible study she decided to give her life to Christ.  In the midst of such a horrible weekend where so many souls were lost, we are blessed to say, a soul was saved. 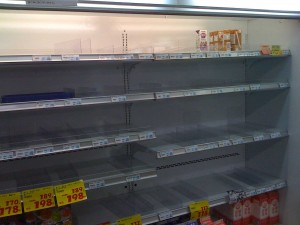 The week following Japan’s worst disaster in modern history, many in Japan worked at a feverish pace to restore some semblance of order.  Although government officials were doing their best to mediate the fears of the people, trepidation had risen over concerns of the possible widespread repercussions that could follow such a tragedy.  Much had been damaged or lost and death tolls were continuing to rise.  Many were without shelter, food, water, electricity and gasoline.  Following the Tsunami/Earthquake disaster, we found ourselves like many others scrambling to find supplies; many of the stores shelves were bare.  Common goods like: bottled water, batteries, breads, toiletries, diapers, dairy products, etc., became to be in short supply.  In view of the uncertainty, we found that our daily Bible studies with our students in our Shizuoka English Bible Classes (SEBC) to be very spiritually productive.  Many of our readers began to ask key questions concerning their personal spiritual condition.  Through this tragedy, we will, God willing, be able to take the opportunity to further glean their interests in Christ. 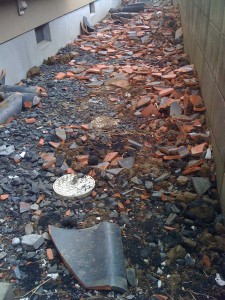 Two weeks after the Tsunami/Earthquake, we traveled over the weekend to Ibaraki Prefecture to help Etsuko’s parents by way of bringing rebuilding supplies and helping repair their home.  Like many in the area, their home sustained extensive structural damage to the roof and walls.  In addition to helping Etsuko’s parents, while in the area we also made a partial assessment of what supplies are needed that we might potentially acquire to assist the brothers and sisters in the Ibaraki Prefecture.  Several in and around Mito Japan, our former mission point, were affected.  The churches of Christ throughout Japan have fared pretty well as far as the reports we have received, but some members did experience losses.  However, in talking to some of the leadership in the area, most of them indicated at the time that they were not in the position to provide an ample appraisal of what their members needed. This was due to the comprehensive nature of the disaster and assistance being offered, being in such a state of flux.  Following our trip to Mito, on Sunday we joined efforts here in Shizuoka City in the purchasing and sending of supplies directly to the Sendai Prefecture.  Shizuoka is the official sister city of Sendai.  Sendai was one of the areas most deeply impacted by recent events.  In view of the then gasoline shortage and shortages of food, water, diapers and other commonly used goods/materials, it appeared at the time that the most effective way we could help was to work closely with local, national and international relief organizations. 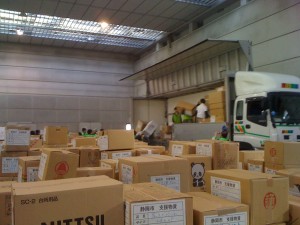 Almost a month since the Tsunami/Earthquake on Sunday evening (April10th) I traveled with two brothers, minister Tomoyuki Shinozaki and missionary Eric Robinson, from the Numazu congregation, to the Iwate-prefecture to bring supplies and aid to those in Rikuzentakata.  We visited shelters, volunteer centers and with countless individuals shaken by the tragedy.  Many of the supplies we brought included: canned goods, gasoline, kerosene, toilet paper, candy for the young at heart and other supplies.  Rikuzentakata had an estimated population of 26,000.  It was reported by many local news outlets that it was feared that approximately half of the city’s residents died in the March 11th Earthquake/Tsunami.  However, upon further review we have discovered that these early reports were grossly overestimated.  It is now being reported that about 1,000 people from the town are confirmed dead with 1,300 still missing. The ten hour journey north in no way prepared us for the sight that we came to behold. The massive devastation and loss is indescribably sad; grief in many cases, inconsolable.  God willing, we will return in a couple weeks to bring supplies and aid.  Additionally, we will be traveling to other places to assist in other relief efforts as well. 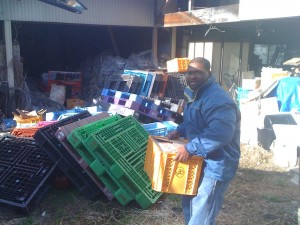 On April 18th I participated in an area wide ministers meeting.  We met to get a clearer picture on where to focus our collective energies.  God willing, we will be working with and coordinating with key people in the areas affected.  We intend to pool the information acquired in an attempt to be the best stewards possible in the use of our time and of the resources we commit in our attempt to make a difference.