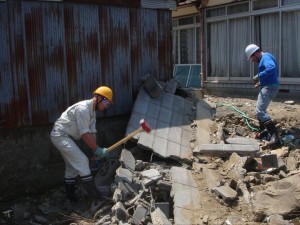 On Thursday, we returned to Watanabe-san’s house for the day. It seems as if God has especially put this woman on the hearts of our team members. Everyone has a desire to help her, and many conversations amongst team members are in regards to her. Having many struggles before this disaster, she struggled even more with her desire to live following the tsunami. She has also been on medication to help her sleep at night. At the end of the day, she remarked that she was thankful she is alive, and that she thought she would sleep well without the medication. God is at work in her life, and He is also at work in our lives through her and her situation. Afterwards, we traveled to the northern part of the city to help the B1 group host a barbecue for residents of an evacuation center. Akiko, Yuko, Gaku and I sang 3 songs as a quartet. It has been encouraging to have Yuko and Toshiko (Sendai Christians) be involved in various ways alongside us.

Watanabe House before and after

Friday was a partial day spent at Watanabe-san’s house to do some ‘final touches’. There is much to do still but at least we helped her to get several steps ahead. In the morning, a few of us also went back to the Tomita family’s neighborhood to distribute fruits and vegetables from a local producer in Sendai that Sasha and Toshiko found, as well as some promised diapers. A couple of people cried when they saw gobo (burdock) for the first time since the earthquake. Tomita said, “More than the stuff, I am moved by forming a relationship with you. Working together is so good. You are like family now.” Though they are not Christians, they welcome our request to pray for their neighborhood.

Afterwards, we continued on to a location that was new to all of us, including Chad’s team. It was easy for me to tell these people are more desperate, as we listened to the residents they told us that many organizations would cease distribution altogether within the next week. I was trying to imagine what that would be like. Suzuki-san was especially enthusiastic, and she was calling friends left and right to come look through the items we brought, and to enjoy the barbecue. We stayed until 7:15 PM, and I told Gaku as I left that it felt so scary and so hopeless and dark at night. An added bonus during this day was the addition of three representatives from Whites Ferry Road Relief. It seems like they are hoping to provide us with some of the needs we have – it was very encouraging to have them around. 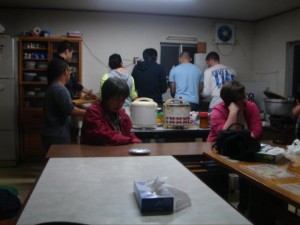 On Saturday, we gave ourselves a little more grace to sleep in before eating breakfast and beginning to pack and clean up. Including our devotional time, we finished around lunch time so we enjoyed Sendai’s famous gyutan (cow tongue) for lunch. God blessed us with a safe journey back to Mito, and we said farewell to Toshiyuki and Akiko as they journeyed on to Yokohama. This morning, it was good to worship with the Mito church and to be with everyone. We’re all tired (perhaps feeling more so than we did on the trip) but amazed at how God worked and thankful we could be a part of it. Our next trip will begin with an encouragement trip and visit with the Hachinohe church, and then returning to work in Ishinomaki.