Brett, Koichi, and I returned late Sunday night from another busy weekend up in Ishinomaki! And what a fantastic weekend it was! Some areas are beginning to look better, and that little bit of change/progress is nurturing great hope! Saturday we did a supply drop in a neighborhood we had worked in before… about 150 people came and lined up down the block. Within 40 minutes, all that we had brought was gone. 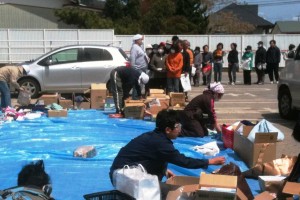 Patiently waiting in line for commodities

In that distribution line, much to my dismay – I had the job of standing at the head of the line and only allowing a certain number of people to go through at a time. But this gave me the chance to talk with people, and that was a blessing! I got to talk with all the kids! One elementary school boy was really standoffish, so I tried to talk with him about sports. He told me he liked soccer, so I asked him if he could play recently… His mom shook her head and said his ball and toys went away with the tsunami. We happened to have one in the van, so I asked him to wait a minute, walked over to the van, grabbed the ball, and brought it over to him. He and his mom just looked at me with wide-eyes and open mouths. He and his little bro immediately started playing with it!

We also went by the neighborhood we were in at the end of Golden Week, the one that was so hard-hit. Some of the people we wanted to speak with weren’t home, but we met the lady next door, Abe-san. She told us she doesn’t usually live there; it’s her parent’s house, but they both died in the tsunami. We didn’t have much of anything left at this point, but we had some rice and potatoes we had overlooked at the distribution. We gave this to her, and she began distributing it to the neighbors around her. She was incredibly thankful, and told us it couldn’t have come at a better time – the funeral for her parents is this week.

That evening we had a BBQ and fed between 250-300. Our teams worked so well together! It’s impressive to see so many wonderful people pull together… 🙂

We also found one of the sisters I mentioned in my first note. We didn’t know where they lived, so we just walked through the apartment complexes calling out their names. The younger sister came darting out of a stairway area, spotted us, and charged all the way, leaped, and flew through the air into my arms! Then she jumped over to Brett! She told us how much they had missed us, and was so happy we came back.

Sunday was rainy, but we worked anyway… We shoveled so much out of the sewage gutters in one neighborhood. It was a tough job! Silt from the tsunami, rotting fish, gasoline & oil, and more feces than I ever care to shovel…

Thanks so much for gathering funds and spreading the word! We still have a long way to go, but we can definitely see improvements in the situation! I’m running late for work – have to teach all day. Have a good week!