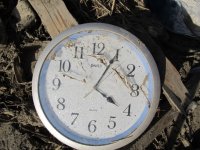 Twenty minutes after the earthquake

From 13 to 16 I stayed in Sendai and helped people in disaster areas.  On a way to Sendai on highway, I saw no sign of the earthquake damages.  The Tsunami caused by the big earthquake flooded  the areas from north to south 500 miles in east Japan.   That is the biggest damage done by this earthquake.   While I was in Sendai, everyday we had relatively big earthquake.

But pictures do not really show the magnitudes of the disaster but only a glimpse of devastation. 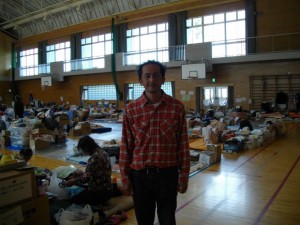 Shin in shelter with 300 others

The left picture shows Shin  and the school gym where 300 people were staying.  On the 14th I went to Watari just outside of Sendai in order to meet Shin, who is a graduate of Harding University.

He has been staying at a school gym for two months, but amazingly he has been in good spirit.  He told me 300 people are living in the gym.  It will go on at least a couple of months.  He said to me he lost his house and business.   Fortunately his family was away and now lives in Tokyo because of his daughter’s school situation.  She  goes  to Christian Academy of Japan in the suburb of Tokyo.   He is willing to sacrifice his family time for her good education.   I gave him Y50,000 as a gift from many Christians in the US. 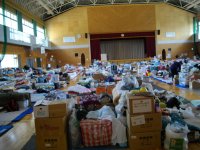 One of many shelters; people who've lost everything

He took me to disaster areas not very far from the school gym.  The areas are restricted to only specialized workers.  Since he is one of them, he was able to take me there.  Although I expected really bad conditions there because I have seen news on TV,  the reality hit me hard when I saw devastations just in front of me.     Not much to say.  Actually what can I say?   He took me where his house and shop were standing.   I suppose Ground Zero may be good words to describe this.  I looked around  360 degrees, but saw nothing but trash.    The area he lived  was actually a great tourist spot visited by millions of people every year.    Nothing was left but only piles of trash like a big mountain.

After a “great tour,”  we went out to eat at a restaurant.  He was happy to eat good food because he has not eaten out for a long time.  He began to ask me about church and Christianity.  He asked me about Christian life in Japan.   He even told me that he wanted to go to church next day if it is OK with me.  I was very happy to hear that because I was thinking when to ask him to come to church.  I was moved by his sincere attitude.  I would like to visit him if the Lord wills.

Although he attended Harding University, he has never become a Christian.  I hope this is just the beginning of his journey to know Jesus Christ.  Even though I am away from him in long distance, I can always communicate with him by email or other things like Facebook. 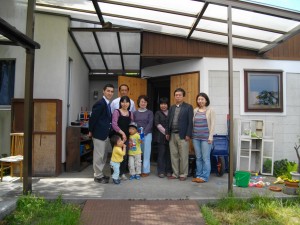 Those attending worship in Sendai, May 15, in front of church building.

I spoke on how we should understand the Disaster and Earthquake.  Since the church does not have someone to minister them, they have hardly an opportunity to listen to a message from the Bible.   I was very impressed with their positive attitude.

The picture was taken in front of the church building.  From left right,,, myself, Shin, Yuko with her two boys, Yoshiko, Yuko, Makoto, and Yuko.   This church building has been used as a storage room for the rescue mission done by Mito Church of Christ.  All the material gifts have been sent here and been stored.   The builidng is located in residential areas in northeast of Sendai.  This is a nice neighborhood.   It seems to me there is much work any missionary or preacher can get done there.   I have added their names on my prayer list.  Also pray that  missionaries and workers  will come to serve there.