[Editor: This is a report Ken Hysten sent to his overseeing congregation (MacArthur Park in San Antonio, Texas). The congregation send funds directly to Ken for use in relief efforts. He reports how those funds were used.] 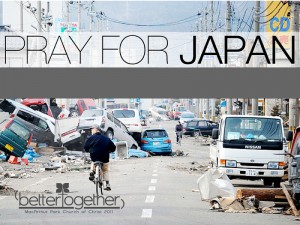 I just returned from a week long trip in support of ongoing relief efforts here in Japan. I initially traveled from Shizuoka to Mito to serve with some brothers and sisters from the Mito congregation in support of relief efforts in the Tohoku region. We were joined by four young Singaporean Christian volunteers from the Bedok Church of Christ in Singapore. It has been ten weeks now, since the major Tsunami/Earthquake disaster which began March 11.

Together, we traveled to four major sites: Sendai, Hachinohe, Morioka, and Ishinomaki. At these first three locations our involvement consisted mostly of interacting with the brethren by way of encouragement and fellowship. Aid has come to these locations from a variety of sources. While recovery is in process, some damped spirits remain and we wanted to promote goodwill and let everyone know by our presence we were behind them in every way we could possibly be of assistance. We had a joint service with the Sendai, Hachinohe, Morioka congregations on Sunday, May 22. Following our time with these congregations we performed relief work in Ishinomaki.

Ishinomaki, like many places, was heavily devastated by the impact of the major disaster. While in Ishinomaki, we visited a local elementary school. One of the highlights for the students and teachers alike was the barbecue we hosted for them. As a result of the recent tragedy, some of the schools were destroyed; three elementary schools worth of students were meeting at this one school. Since the tragedy and opening of the one school, students had only been able to eat bread and have milk for lunch. Needless to say, we believed having a barbecue would be an uplifting event. It was apparent God blessed our efforts. In addition to feeding the students and teachers, many local residents participated in the event. Through God enabling us, we were able to feed over 300 people.

We also traveled to the central area of Ishinomaki, bringing supplies to those in need. In the course of a few days we distributed hundreds of goods, fresh produce, and encouragement to many. Additionally, while there we worked to clean and repair facilities. Overall, God blessed us with a very eventful journey as we labored to assist, inspire, and render aid to those in need while attempting also to bring honor and glory to His name.

We want you to know we are so grateful for the funds you have sent our way on behalf of those in need. [Editor: These are funds sent from the MacArthur Park church to Ken for use in the relief effort. This is in addition to the funds sent to the Mito congregation.]  To date, we have dispersed most of the funds you have provided and are in the process of ensuring the balance of what you have contributed is maximized to the best extent possible. I want you to know we have made every attempt to carefully assess and investigate how to wisely administer and distribute the funds you generously sent our way to help the Japanese people. From the outset, our goal has been to glorify God; appropriately represent you; and help those in the Lord’s Church first and foremost who were impacted by the disaster. We were desirous also of assisting those we were aware of or were informed of, who appeared to be good candidates to be converted to Christ. Thus we have distributed most of the resources you entrusted to us within these parameters primarily. At this point, two congregations and one Christian brother and a non-Christian (a close friend of Etsuko’s and prospective candidate for the Lord), have been the recipients of your financial gifts.

Nakaminato Church of Christ: We have given funds to help in the repair of their building. The church building sustained a great deal of structural damage to its roof, ceiling, and walls.

Katsuta Church of Christ: We gave funds to help in the repair of their building. The ceiling and roof of the church building sustained major damage. Additionally, the home of the minister of the congregation (which is located on the church’s property) was also damaged. We contributed funds to make repairs to the home as well.

Ishioka Church of Christ: We gave financial assistance to a member of the Ishioka Church of Christ, Takumi. Tragically, he lost his home and younger sister because of a fire that came about as a result of the massive earthquake that occurred on March 11. We were emotionally moved when we learned about his devastating losses; however, we were saddened even more to learn of the death of his sister. She was scheduled to be baptized the weekend of the Tsunami/Earthquake.

Yurino: We also gave financial aid to the family of Yurino. Yurino and her family were deeply impacted by the recent Tsunami/Earthquake. The day before the tragic event of March 11, Yurino, gave birth to the family’s second child. The Tsunami/Earthquake struck while her husband, Yoshiji and son, Kouki, were visiting her at the hospital. Due to their home being in close proximity to the Fukushima Daiichi Power Plant, they like many in the area had to evacuate their home. After a month away, they were finally able to return to Fukushima; however, their home was severely damaged and they currently are staying with her grandmother in the area. To further complicate and already difficult ordeal, Yurino’s baby, Marin, is not doing well physically. Yurino is an old friend of Etsuko’s whom she has been trying to reach for Lord for years. Although this is a tragic event for them and many others, we are hopeful that in assisting them Yurino and her family will be more open to learning about Christ.