Our journey this year started with a delay. The flight from Memphis to Dallas was delayed because they needed to change a tire. In the process the jack broke. We got off the plane in order to lighten it so they could get the jack out.  That worked.

With that fixed we left over two hours later than scheduled and arrived in Dallas as our plane to Tokyo-Narita was to have taken off. But it too was delayed so we had a nice layover in Dallas which gave us an extra blessing.

While getting lunch we saw a familiar face, a friend from college days at Harding. She was booked on the same plane to pick up her daughter. She was born in Tokyo and was a member of the Ochanomizu church before going to Harding College and marrying. What a blessing to spend some time with her and catch up on things.

The flight to Tokyo was uneventful. They have not shortened the flight time so we were ready to arrive, catch a bus to Tachikawa, and get in bed. The ride from Narita to Tachikawa took three hours, but we slept better on the bus ride than on the plane.

Our first day in Japan was a full one. We traveled to Shin Misato, Chiba, and met up with Steve and Debbie Carrell. They work with the Matsudo church. They took us to Costco to pick up food for our time in Japan. We had lunch together – pizza – and enjoyed the fellowship with Steve and Debbie as well as with the newly weds Kyle and Nahoko. We hosted them for their visit to Memphis a few months earlier.

After shopping we headed to Tachikawa to drop off the things we bought and then on to Yokota for the Wednesday evening assembly. Steve is teaching this quarter. Brother Shima from the Tachikawa congregation let us ride with him back to Tachikawa.

Today we boarded a bus very early to make another trip to the Tokyo-Narita airport. We headed to Bangkok, Thailand, where we overnighted before heading on to Chiang Mai. That is where the 50th Asian Mission Forum was held this year. The theme for the forum was “Faithful for Fifty.” 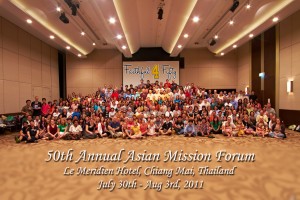 What a wonderful time of fellowship and up lift. Over 200 from various countries in Asia attended. Some came as far as New Zealand. The accommodations were five star and the worship, Bible study, and fellowship surpassed that. The city of Chiang Mai reminded us of Japan when we first visited in 1969. 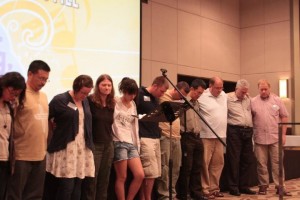 Prayer for relief work in Japan at Asian Missions Forum 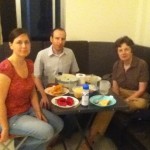 Meal with Andrew and Natalie Hayes in Phnom Penh

From Chiang Mai, Thailand, we headed to Phnom Penh, Cambodia, to visit Andrew and Natalie Hayes. They were former members of the Park Avenue congregation. They work as vocational missionaries teaching English. They have a house church as well as helping other congregations in the city.

Cambodian history is so sad. We read several things about the culture, history, and religion before going. They have only had a stable government for a little over twelve years. They are making improvements, but poverty is still a very big problem as is political corruption in the government.

We worshiped with two congregations in the city. Dwight was asked to speak in the morning with the minister as a translator. Andrew translated for the speaker at the evening assembly. Andrew’s and Natalie’s ability in the Khmer language is very good.

We returned to Bangkok Monday afternoon and waited for our evening flight to Tokyo-Narita. We flew all night arriving Tuesday morning. After going through immigration and customs again, we boarded a bus for Tachikawa.

This first leg of our trip was so encouraging. God is at work in the Orient through some wonderful people.

We returned to Japan August 9 with some type of cold or bronchitis. It took us the better part of two weeks to get over it.  It left us with a nagging cough which gradually got better. 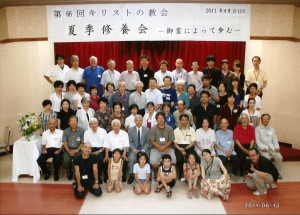 This forced us to cancel our trip to the Ibaraki Summer Seminar, August 12-13. We have gone to this in the past and it is an excellent time to meet a large number of people from different congregations at one time. That was a decision we were saddened to make. But it did give us a couple of days to improve health wise. 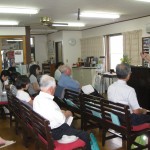 Worship with the Tomobe church

Saturday afternoon we took a train up to Tomobe to spend the night with Marlin and Jeanne Ray. They have worked with the Tomobe congregation for over 25 years. They are great hosts and important workers in the Ibaraki area. They have also been involved in relief efforts in the Tohoku area of Japan struck by the earthquake and tsunami.

Sunday I shared a lesson with the congregation. Then afterwards the Rays had arranged a hamburger cookout for the congregation and those involved in English Bible classes. The hamburgers were good and the fellowship as well. One treat for this visit was to meet a mentor and fellow minister brother Terakado. He can no longer drive so is limited in how he can get out to other congregations. He lives in Oyama about an hour drive from Tomobe. 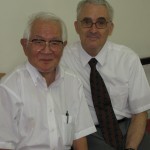 We would have liked to stayed longer, but headed back to Tachikawa that afternoon. We were still recuperating. For the next few days we stayed in working on lessons. This year was hot again. With the request to conserve electricity, we used the air-conditioning as little as possible.

Today we journeyed by a train line we had never taken before to Takasaki, Gunma. This was a kind of back roads train winding through hills and farm land. There we visited with Paul, Stacey, and Titus Herrington and brother Obata. The Herringtons have worked in Haruna for two years through the Helpers In Missions (HIM) program overseen by the Memorial Road church in Edmond, Oklahoma. 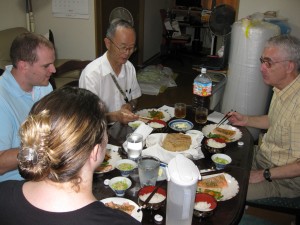 Meal with Herringtons and Obata in Haruna

Following the earthquake in March they moved briefly in Kojima, Okayama, away from possible radiation. While there their first child, Titus, was born. He is a healthy boy and will grow up to appreciate the wonderful parents he has.

For two years the Herringtons have done a very good work with brother Obata in Haruna. Their reports also appear on this website. We hate to see them leave Japan and pray that they might be led once again to come and work here.

Brother Obata is a big help and encouragement for the relief efforts in the Tohoku area. Surgery this past June has limited the amount of help he could give, but as he gradually recovers he will become more involved. He has experience with earthquake relief having worked with relief efforts following the Great Hanshin earthquake in 1995.

The commute on this Sunday was very easy. We walked down one floor to the Bible class. Today we worshiped with the Tachikawa church. Nao Fukushima, minister for the congregation, led the class from Matthew 24 concerning the signs of the end of the age. He did a very good job of explaining a very difficult passage. 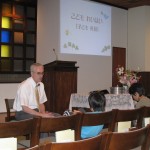 Children's lesson before sermon at Tachikawa

Following class I shared a sermon with the congregation. At Tachikawa before the sermon the speaker shares a simplified message with the children before they are dismissed to their own classes. Following the assembly we had a meal together. These are always good times for fellowship. We deeply appreciate this congregation permitting us to stay in the dorm on the third floor. This becomes our home and base camp while in Japan.