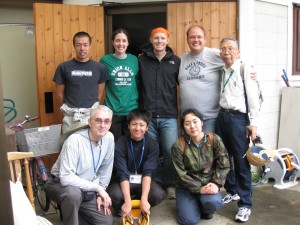 During this trip I wanted very much to get into the Tohoku area to see the devastation and to help with some of the relief work. I had to coordinate my schedule with the schedule of those going to help. That opportunity came on Monday, August 22. I headed up to Sendai on Sunday evening where part of the group picked me up and took me to the Sendai church building where we would stay. 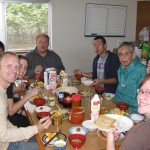 The following day after breakfast and a devotional time, we made the hour and half ride from Sendai to Ishinomaki. There we received our work assignment for the day. It involved helping clean and clear out two homes which had been flooded by the tsunami following the earthquake on March 11.

Our group divided into two smaller groups and joined others to help with the two houses. My group worked in a house where the tsunami reached almost to the ceiling of the first floor. Some worked in the living room cleaning up furniture, going through items drenched by the flood, and straightening up things so the owner could go through them. By this time things had dried out and there were no bad odors except when you hit a pocket of trapped water from the tsunami. 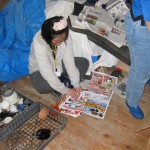 Wrapping dishes for one survivor

The water had reached a height of a little over 6 feet, totally wetting everything on the first floor. The owner had retreated to the second floor to escape the rising waters not knowing how much further the water would come. 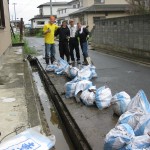 Bags of mud and debris from street gutter

Another part of our team worked on the outside cleaning the street gutter around the house. I helped them a bit in order to get outside in some fresh air. There was so much stuff in the mud – roof tiles, broken glass, dishes, wood, even the rear view mirror from a car. All of this material was bagged up and taken to the dump where debris was being assembled and processed.

After finishing this house, we went to another house where another part of our group had been working. We helped them finish their work. Again we were cleaning up the house for the owners so they could see it one last time in as good as shape a possible. This house had flooded to the second floor. It was located less than a mile from the sea coast. 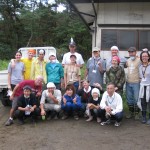 In all likelihood this second house will be torn down. However, the government has not yet decided if they will permit the people to build again in this location. It is susceptible to tsunami waves so they can anticipate it happening again.

We helped load two trucks with debris to go to the dump. When they returned we had a time of prayer and dismissed for the day. Our group returned to Sendai, but made a brief stop at an evacuation shelter to visit a lady they had helped in the past. Two of the workers established a relationship with this lady as they worked to clean her house. While there I got to see firsthand the living conditions for these victims.

In an average size elementary school gym there were rows and rows of small rooms made by three to four feet high pieces of cardboard. They were perhaps eight to ten feet square with a small opening for entering and leaving. Inside were the personal possessions of someone whose house was destroyed by the tsunami. This was perhaps the saddest experience I had. They had been living this way for five months. 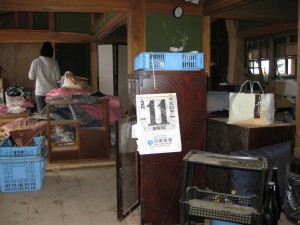 Reconstruction is pretty complicated. The governments, national and local, are discussing ways to rebuild the communities or whether they need to move them away from these areas because of the possibility of future tsunamis. In the meantime, these people are in limbo not knowing if they can rebuild or if they will need to move.

Further compounding things is the relationships with neighbors and friends these people have grown accustomed to. The displaced people would still like to retain the community they had before the tsunami. This means they will need to coordinate the relocating of groups of individuals as groups. If they build an apartment complex to house the people on higher ground, then they would like the same community of people to be a part of the complex. All of these things must be taken into consideration as they determine how to proceed.

Another caveat in this is the support for living expenses. While in the shelters all their living expenses are covered by the government. For people who have lost their jobs and have little if any savings, this is a big help. But should they move to temporary housing provided by the government, they would then need to provide their own living expenses. How can you do that without a job? The temporary housing is fully furnished with appliances and furniture. If they live there for two years, then they can keep everything. But some refuse to go because they have no jobs or means of earning a living with their community totally destroyed.

After they said their goodbyes to the lady they had helped, we made our return trip to Sendai. The church building is used as lodging for workers as well as a place to assemble supplies. There was some damage to the building from the earthquake, but it is still structurally sound.

The roads around Ishinomaki were cleaned of debris. Cars which had been washed everywhere by the tsunami had been removed as well as boats and other items. But things were just bare except for a building here and there whose first floor seemed to be cleared away except for posts and walls supporting the floors above.

As time passes the relief work will change from physical clean up to dealing with post tsunami emotional and spiritual trauma. I did not get to interact with the people whose houses we cleaned on this one day trip, but that will become more necessary as time passes. 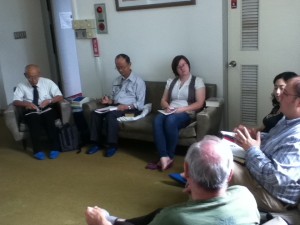 Since this is related to the relief efforts, I will discuss the meeting of the committee utilizing funds contributed through the Mito church here rather than in chronological order with other reports. There are seven congregations in addition to the Mito congregation who make up the committee. The chair person is Shiro Obata, minister for the Haruna church in Gunma Prefecture. He has experience with earthquake relief from the Great Hanshin earthquake of 1995. While the relief efforts in the Tohoku area are compounded by the tsunami, he still has a great deal of insight and wisdom about helping. 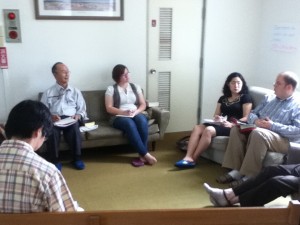 This was the second meeting the committee had since being formed in April. Brother Obata underwent surgery in early June so was unable to travel to Mito to call a meeting. Much of their communication and discussion has been done via e-mail.

Shortly after the earthquake and tsunami, Japanese ministers began getting calls from many people wanting to help and asking how they could do that. After some discussion at the area ministers’ meeting, they decided to recommend the formation of a committee open to congregations interested in being involved in the relief effort. A total of eight congregations decided to participate and brother Obata was chosen to chair the committee since he had some experience in earthquake relief efforts.

Through their efforts groups began being sent to the area each week for two to three days to work while Joel and Hiro remain for longer periods of time. You can read some of their reports of these initial efforts on this website. There is also a dedicated blog concerning their work as well. Because of the magnitude of the effort, time for reporting was limited so initial reports of work were sparse for those not directly involved in the efforts. 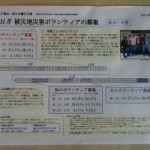 Volunteer opportunities to help with relief

Contributions came in from many directions and from all over the world. The Park Avenue church and Bramalea church received funds from the U.S. and Canada respectively. Other funds were sent directly to the East Japan Relief fund set up by the Mito church and to other sister congregations in Japan. The committee exercised stewardship of the funds they received and set up guidelines for their use. Other sister congregations receiving funds exercised stewardship over the funds they received or sent their funds to the relief fund.

At this meeting on September 6 efforts up to this point were reviewed. Each individual involved in direct relief efforts reported on things from their perspective. Following this the group reviewed the current situation and looked to the future and how relief efforts will change.

A recent Japan Times article marking the sixth month since the earthquake/tsunami reported that “some 20,000 people are dead or missing” and “more than 800,000 homes were completely or partially destroyed.” “The Japanese Red Cross estimates that 400,000 people were displaced.” 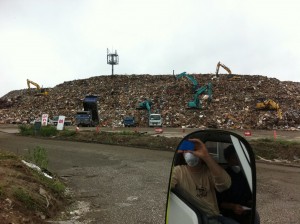 One of many piles of debris

There are signs of progress with debris cleared or at least placed in large piles for processing. Cars and boats washed up by the tsunami have been removed and many of the evacuees have moved out of gyms to temporary housing or apartments. Supplies, which were critical at the beginning, are now easier to find in the disaster areas.

But there is still great frustration about the future. The governments have yet to decide whether to rebuild or move the people to different locations. This is a very difficult thing to do when inhabitable land is so sparse. 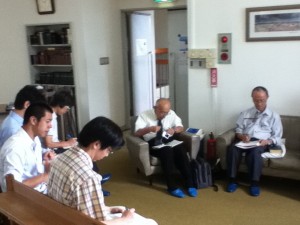 The committee discussed these things as well as how to coordinate future groups both domestic and foreign who want to help. Now that most debris has been cleared away, relief efforts will change to emotional/spiritual care. A schedule for relief efforts through November was presented. People wanting to help need to realize that they need to coordinate their times of service with those leading the relief efforts. They cannot on the spur of the moment decide to come and help.

The meeting, attended by representatives of six of the eight congregations, was a very positive one. Their plan is to continue relief efforts through 2012 at least. During that time they will need to periodically evaluate their efforts and adapt to changing needs. But with prayer for the Lord’s help and a willingness to be of service, I am sure they will continue to have an impact of those they help. There is still a need for funds so they can continue as planned through 2012. If you are moved to continue giving or have questions, please view this page for additional information.