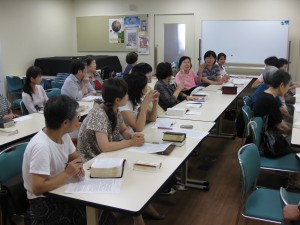 Our sixth Sunday in Japan was spent with the Ochanomizu church. The Saturday before Josephine had a ladies class discussing the topic of “The Twilight Years.” She also had a larger class on Sunday afternoon discussing “Christian Maturity.” Josephine writes her lessons out and gives them to the translator. Each class member is given a copy of the English and Japanese for that lesson. There is always a time of good discussion following the lesson.

Sunday’s sermon at Ochanomizu was another one on elders. This text came from 1 Peter 5:1-5 entitled “The Chief Shepherd’s Servants.” The Ochanomizu church is about to reaffirm existing elders and appoint new elders. Times of change such as this can be unsettling. The church is growing in their understanding of elders and their responsibilities. 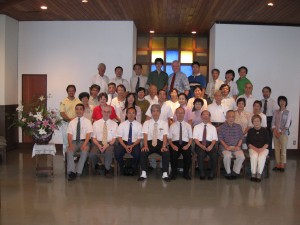 Monday, September 19, was a holiday in Japan, Respect for Elderly Day. The Japan School of Evangelism uses this day each year for a lectureship commemorating the beginning of the school twenty-one years ago. Hideki Ataka, minister for the Omika church, gave his final two lectures on the seven last words of Jesus from the cross. This is part of what is called GolDenKoza (a rough translation would be “class whose goal is teaching”). These classes are recorded for future use by individuals and congregations. The lectureship was well attended by many from several different congregations. The lunch time is always a great occasion to renew friendships and share information. 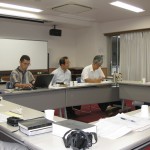 Following the lectureship teachers for the school met over night to discuss curriculum and other items. It was a very positive, productive meeting. We discussed how to improve the curriculum, recruit new students, and future classes for the GolDenKoza. The current student is scheduled to graduate next spring. There are possibly two other individuals wanting to begin their studies.

Each year we purchase a Japan Rail Pass for travel to distant congregations and for visiting. This year we purchased a two week pass which ran from September 21 to October 4. Our first visit was a day trip to Niigata to see one of Josephine’s former students.  She and her family, husband and two boys, lived in Memphis for three years. During that time Josephine shared the Bible with her through English. We have maintained contact with them through the years. Their eldest son is now in college in Tokyo. He and his mother visited with the Ochanomizu church the Sunday we were there.

On our return from Niigata a typhoon came ashore. By the time we arrived in Tokyo all trains stopped for over three hours due to rain and wind. We were stranded in Tokyo Station along with thousands of other people as we awaited the restarting of the trains. We were able to get the first train out of Tokyo, but it was very crowded. It is amazing how efficient the train system is in Japan and you don’t appreciate it until something goes wrong. 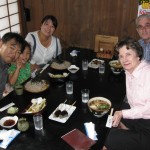 The next day we headed to Utsunomiya to spend a couple of nights with another couple Josephine taught while in Memphis. Their house was damaged by the earthquake in March, but structurally was still sound. The weather after the typhoon was great and we had a very enjoyable time with them. Their daughter is now five and goes to a Christian kindergarten. Her mother also attends a Bible class there. We are thankful for the continued Christian influence in their lives.

From Utsunomiya we headed to Hachinohe for a weekend seminar hosted by the small Hachinohe congregation. Christians from Sendai, Morioka, and Misawa also attended. We studied Psalm 139, God and Me, on Saturday. On Sunday the lesson was from the Parable of the Pharisee and Tax Collector. 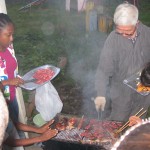 Saturday following the classes we had a Japanese style barbeque. Everyone brought something to share and the Hachinohe congregation did the cooking. The food was good and the fellowship even better. Then on Sunday following worship together we had another pot luck with the leftovers from Saturday being added to curry for curry rice. 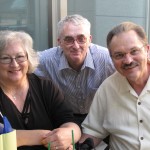 Immediately following cleanup from the pot luck we took off for Sapporo overnighting in Hakodate. Sapporo is the capital of the northern big island of Hokkaido. It is about seventeen hours by train from Tokyo. This was our first time in Sapporo and our purpose was to visit Steve and Marcia Hasbrouck. It had been over thirty years since we last saw them though we have made contact via mail through those years. We had a delightful visit with them for over three hours learning about their work and their family. 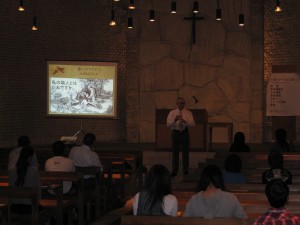 We returned to Tokyo long enough to change clothes, then headed on September 29 to Omika to speak in chapel at Ibaraki Christian University. The Omika congregation supports Junichi Uzawa as campus minister. Yoshiya Noguchi, minister for the Ochanomizu congregation, is chaplain for the university.

During chapel I encouraged the volunteer group on campus known as “GooSama” short for “Good Samaritan.” This group does different works of service. I reminded them that Christians serve (love) because they have first been loved by God (1 John 4:19). Additionally we are to do what we can with what we have and are not expected to do things based on what we do not have (2 Corinthians 8:12).

Following the earthquake and tsunami on March 11, so many Christians in the United States began to call my office to ask how they could help. I shared with those in chapel some of the letters I received with these contributions. The son of former members of the Park Avenue congregation sold lemonade to raise funds to send. Another elementary girl collected funds from her congregation to give. Others had garage sales. All did what they could. I encouraged the students to do what they could as well.

We had lunch with Jim Batten, chancellor for ICU, and his wife. This was another good opportunity to learn things about the school, the earthquake relief, and the Omika congregation. Then returning to the school we met with a young mother about a possible trip to the U.S.

The highlight of the day was supper with the Yoshiya and Emiko Noguchi and their family. They are very busy with school, the congregation in Ochanomizu, caring for aging parents, and two young children. It was a blessing to be with them. 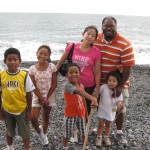 We returned to Tokyo for one day and then headed west to Shizuoka. Here we stayed with Ken and Etsuko Hysten and their four children. This is another family who is busy working with the Nakada congregation. We enjoyed an afternoon with them on Saturday and then went to worship with the Nakada church Sunday. 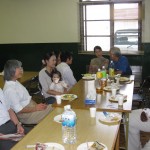 Worship with the Nakada church

The Nakada church was begun by Hattie Lee Ewing shortly after the war. Fumio Maeda is the minister for this congregation. Ken Hysten began working with him two years ago. This was our first time to worship with them. There were over twenty in attendance. One couple we had not seen since our Motosu Camp days in the early 1980’s. There was one who had been a Christian for only one year. There was a young couple with a four month old. The husband was baptized at the Tachikawa church building and his parents still live in Tachikawa. He and his wife met via a Christian matchmaking service. Following the assembly, you guessed it, we had a pot luck lunch which lasted over two hours. What a wonderful time of fellowship. 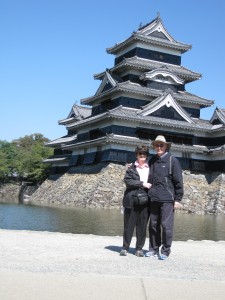 Visiting the Black Castle of Matsumoto ending our 2011 trip

Returning to Tokyo following the pot luck, we began to prepare for our return. As I type this it is now Tuesday evening, October 4. We leave tomorrow afternoon. We had a wonderful lunch time with Nao and Noriko Fukushima Monday. Today we used the last day of our pass to make a trip to Matsumoto and the Black Castle. Some trees are beginning to show signs of autumn, and the view of the mountains and even Mount Fuji were beautiful.

We begin our long trek back to Memphis tomorrow. As I look back on the past ten weeks, I am truly humbled by the kind hospitality we have received and the opportunities to share some things about the God who loved us enough to give his Son. I continue to be encouraged by the faith and service of Christians here. The Word is being proclaimed and lived out. May God continue to bless each one to be light and salt to this dark nation.