Happy New Year to you.  We have started the New Year off running.  It is cold here with ice on the car every morning.  Our Honda would not start yesterday, so I had to jump it.  I don’t know about tomorrow morning.  I used to like to go skiing and other winter things, but I just don’t like the cold everyday.  We haven’t had any snow this year.  Even at camp, there was none.

We had many activities at the end of the year.  Besides the many parties, we baked cookies and took them to two nursing homes.  We baked and decorated over 400.  It is fun, but the workers are few.  We also had our traditional New Year’s eve prayer meeting.  Only eight came, but we had a good prayer time. 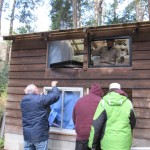 Camp had good and clear weather.  About 20 spent the night, with more coming during the day.  It was cold, but not too bad.  The water heater in the kitchen froze one night, but no pipes broke.  We replaced the windows in one cabin.  The old windows were just corrugated plastic roofing on a frame.  Bugs and small animals (such as snakes) could enter.  We installed aluminum framed windows and screens and sealed them with silicone.  All the women’s cabins should be OK, now.  Next we must do the men’s cabins.  We had some good Bible study and fellowship, too.

I went to the Sendai area with a group from Mito church to pass out food and other things.  We also visited the houses of some of the victims.  Some are living in the second floor of homes damaged by the tsunami or in their garages.  It was getting quite cold there, as it is further north than Ibaraki.  Visiting them in their homes was very enlightening.  Seeing the conditions in which they live was good for me.  You can see some of the pictures and other reports at the web page of the Park Avenue church in Memphis.

Jean and I went to the Iwaki area and helped to make mochi (rice cakes), a traditional Japanese New Year’s food.  We cooked some special rice and then pounded it with a big wooden hammer until it was like a ball of glue.  There were all kinds of toppings and everyone ate and enjoyed.  The only one we could not eat was one with fermented beans on top.  It is like boiled okra and taste…?  Many Japanese like it and also a few Americans.

We had a good time talking with the victims.  Most are living in government housing now.  They can live there for about 2 years.  After that they will have to find other places to live.  The housing is free to them.  Some people can’t rebuild their houses as the land has been declared unusable for houses, because it is in a low area or too near the nuclear power plant.  And most don’t have jobs.  Some have lost most if not all of their families.  What to do is the question.  Some are also old and have no desire to rebuild.  These are some of the reasons for an increase in suicides in that area.  Please keep this in your prayers.  [Editor’s note: Here is a recent article about the suicide rate in Japan form the Japan Times.]

While I was in this area, I talked to many people about needs.  I was asked for hot water bottles to put into the bed at night to keep them warm.  I bought 200 and will take them up on Thursday this week.  I have also been asked for some futons (Japanese style beds on the floor).  I will also get them to take.  The Christian Relief Fund has sent me some money to do this.  Thank you very much.

Jean and I spent a couple of days with a friend in the Tokyo area during the New Year’s holiday.  We were also given tickets to an “American” Football game (meaning not soccer) on January 2nd.  We went and had a good time.  It was called the Rice Bowl.  The top college team and the top club team of a company played.  One of our students at the Tomobe School of Life gave us the tickets.  Her husband is one of the players.  After the game, we went home with Yumiko Hara and her husband.  It was their first time to see an American football game.  I think they enjoyed it.  It was a good visit with them.  She was the first person I baptized in Japan 36 years ago.  She attends the Tachikawa church the Tokyo area.

Thank you so much for all your support through these 35 years.  Many people have heard the gospel and a few have responded.  We keep working and letting God be praised.  This year’s theme verse at Tomobe is the last part of Matthew 28:20, “I am with you always, to the very end of the age.”  God has been with us and I know He will continue to be with us until this life is over.  Again, thank you.