We left Memphis Monday, August 6, wondering if we would be able to make our connections in Atlanta. The ticket agent assured us we would and the cabin attendant said the pilot was going home so we should make good time. And we did arriving about fifteen minutes early. As we approached our gate the boarding had begun so we did make it.

The flight to Tokyo/Nartia and then bus ride to Tachikawa was uneventful, but long. One of the sisters at Tachikawa picked us up at the bus stop and we arrived at the dorm about twenty-four hours after we left home. 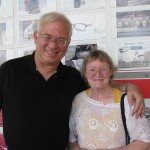 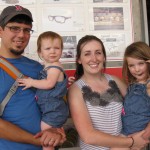 Leslie and family arrived the same day we did. They are setting up housekeeping with Steve and Debbie’s help. They will worship with the Matsudo congregation while Leslie is in language school. 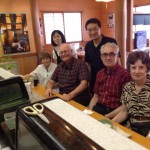 On Friday we journeyed three hours to Tomobe for lunch with Marlin and Jean Ray. We had some very good sushi at the Sennari restaurant owned by a couple who is part of the Tomobe church. Their son just enrolled at Oklahoma Christian University to study to become a minister. 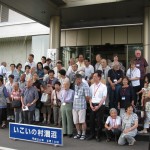 Marlin and Jean took us to the 67th Ibaraki Summer Seminar held at a center on the shore of the Hiruma Lake. It was a wonderful experience as we connected with past friends and made new ones. There were sixteen congregations represented with over ninety in attendance. We were still suffering from jet lag, but were able to participate in most of the seminar. See pictures below. 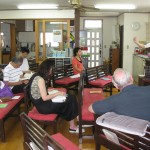 Sunday we worshiped with the Tomobe church. Dwight spoke in rusty Japanese. Thankfully it gets better as he gets over jet lag and has more experience speaking. Following the assembly we had a aisankai (pot luck meal) together. We brought “Grandma’s Cookies” to share with the bunch. It was a very good time of fellowship. 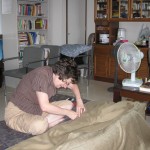 Covering a couch at dorm

We returned to the dorm Sunday afternoon. This week is a time for lesson preparation. We also reupholstered the dorm couch. Josephine had patched it for several years, but it needed a new cover.

One week has come and gone. We begin classes next week and will worship with the Tachikawa church this coming Sunday. Thanks for your continued interest in our work in Japan and your prayer support.