The sun is getting up later and there’s a hint of coolness in the early morning all indicating that summer is nearing its end. Labor Day marked the end of summer vacation and the beginning of school, but many schools have been in session for almost a month already. 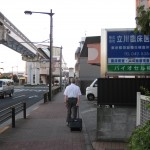 Traveling to monorail station in Tachikawa to begin a trip

About this time in our annual trips things seem to begin to speed up. We’re coming up on four weeks here. We have worshiped with five congregations on the four Sundays we have been here. We still have six Sundays as well as several other classes yet to do. 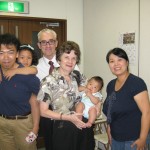 We had a great surprise our second Sunday in Japan. We worshiped with the Tachikawa congregation that day which was an easy commute, third floor to first floor. When we came down we were greeted by the Kimata family. Josephine had a Bible study with them for the two years they lived in Memphis. Now back in Japan, they have two children. It was such a wonderful surprise. They stayed afterwards for a meal with the congregation. 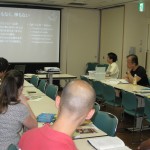 Our Wednesday night and Thursday morning classes at Ochanomizu and Tachikawa continue to go well. In the first lesson we discussed the consequences of not believing in God. The absence of God impacts three questions about life itself: meaning, value, and purpose. The second lesson built on that as we looked at questions a famous atheist asked which brought him to theism. Who wrote the laws of nature? Did the universe know we were coming? How did life go live? 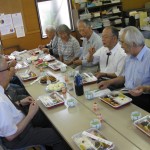 Our third Sunday was spent with the Takahagi congregation. This is in northern Ibaraki very close to Fukushima Prefecture. There were still some effects from the earthquake and tsunami of March 11, 2011. Several blocks around the train station were vacant after heavily damaged buildings were removed. This was our first time to worship with this congregation though Dwight taught a retreat for them in the early 1980’s. 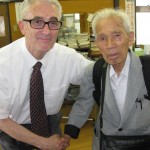 Dwight with 90 year old at Takahagi

A junior high student and his mom were visiting, but other than them Dwight was the youngest in the group. There was a 90 year old gentleman who had attended for a while. He is not yet a Christian but has been studying with the minister. Several in the congregation preach at other congregations which do not have regular ministers. 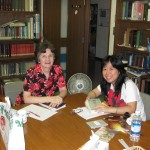 Josephine with Tachikawa member for class

Josephine met with a member of the Tachikawa congregation. They shared time together as Josephine encouraged her in her faith. They have exchanged email addresses and will continue to have some contact. She has also attended the Thursday morning classes.

Another treat we had this week was a visit to a former helper with us in Uenohara. While studying in an evangelical college, he worshiped with us for a year, 1981-2. Upon graduation he broke with our fellowship and became a minister for a religious group associated with the college. For the past twenty-five plus years he has worked with a congregation in Kanagawa Prefecture. It had been about thirty years since we had seen each other.

The weather in Japan continues to be hot and humid. Currently there are no typhoons in the area to bring some relief. However, we have been able to see Mount Fuji on several occasions which is quite unusual for this time of year. The past two days (Saturday/Sunday, September 1,2) has brought much needed rain to the area and a break in the high temps. The temps and humidity have returned.

We still have a number of things left to do here over the next six weeks. There is still a good bit of preparation needing to be done. The ladies of the Ochanomizu church asked Josephine to talk about ministering to the elderly. She will also have a class with the Tachikawa ladies next week. She is working on those lessons. 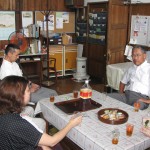 The Nonogakis continue to do a good work at Yokota. Some of the members have had personal problems which affect their attendance. But in spite of this Masa continues to teach. He currently have a Wednesday class with two men. He has also completed five of six lectures on women’s roles in the church. These are taped so the lessons can be used in the future.

As we come upon the end of the fourth week, we have been richly blessed. Our prayer is that we can be God’s instrument to encourage those working here. Next weekend we will journey to Mito to worship with that congregation and attend the Ibaraki area ministers’ meeting. Thank you for your words of encouragement and prayers. 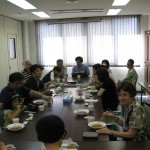 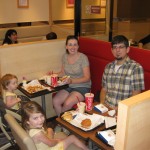 Supper with the Taylor Family

Traveling to monorail station in Tachikawa to begin a trip 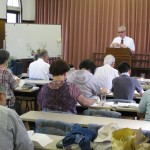 Dwight with 90 year old at Takahagi

Josephine with Tachikawa member for class 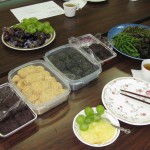 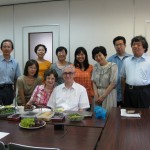 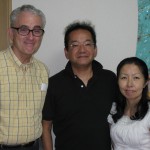 While a student, he worshiped with us at Uenohara 1981-82 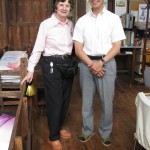 Josephine and Masa with mosquito coil 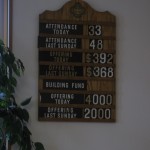