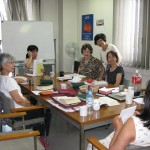 Since our last report the weather has turned more fall like and three Sundays have passed.  Josephine had two ladies’ classes. The first was with the Tachikawa ladies dealing with spiritual maturity. Rather than compare ourselves to others, we should set as our goal becoming more like Jesus, being transformed by the influence of the Holy Spirit. The truth which God has revealed to us is vital to maturing in Christ. Christians are to use truth, love, and forgiveness at all times with every relationship encountered.

Josephine’s second class dealt with the elderly. This was the request of the ladies at Ochanomizu. The class and topic was a wonderful catalyst for discussion and sharing. Not only were they concerned about an aging membership, but they also have elderly within their immediate families to care for. Japan as a nation is aging quickly so this is a very relevant topic. 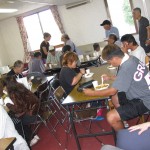 Agape Meal for homeless in Mito

On our wedding anniversary, September 8, we journeyed to Mito for their Agape Ministry. Once a month they provide a warm meal for homeless and give away non-perishable food items and toiletries. There were 23 homeless present and 22 workers. Another religious group comes to help as well as providing some food items. This work is funded by special contributions from the membership. Dwight gave a short devotional before the meal.

The next day, Sunday, we worshiped with the Mito congregation. They are in a study of Genesis so the assigned topic was from Genesis 16 – “The God Who Sees” [顧みられる神]. The Japanese word used here for “sees” has the nuance of stopping and looking closely, not just a glance. What a powerful word to describe our God who stops to look closely at us and administer grace to our needs. 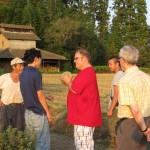 On a walk with Joel, Gaku, and Hiro / Visiting with a local farmer

Our time in Mito gave us the opportunity to be with the group heading the relief work in Ishinomaki. What a blessing to be with Joel, Gaku, Hiro, Namae, and Sasha. They have worked tirelessly to minister to the needs of that area. The ministry now is changing as they transition more to spiritual and emotional needs rather than physical. One highlight of their recent work was the rebuilding of a playground in an apartment complex that they have been working with for some time.

The following Monday we met with the Ibaraki area ministers at Omika in their monthly meeting. One brother shared a message of how God has worked in the midst of the tragedy in the Tohoku Area. Following the morning message we met to discuss concerns among the churches and joint efforts they are engaged in. Recently two of the younger ministers in the Ibaraki area have had some major illnesses. Also the minister for the Hachinohe congregation in Aomori Prefecture died. He was 92 years old and had worked in the Tohoku Area for over 40 years. 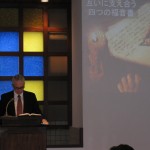 Lecture for Japan School of Evangelism

Dwight put much time and study into the two lectures he presented for the Japan School of Evangelism. This annual Lectureship commemorates the opening of the school 23 years ago. The two topics dealt with the reliability of the Gospels as eyewitness accounts of the life of Christ – “Who Wrote the Gospels” and “Undesigned Coincidences in the Gospels.” Both lectures had timely information concerning the reliability of the Bible. There was over forty in attendance.

Following the lectureship we both accompanied the teachers for their annual meeting to discuss curriculum and ways to minister to churches. Josephine noticed a more cooperative and positive atmosphere for the meeting. What a great encouragement. Young people are considered adults when they turn twenty. Now that the school is an “adult” it is making some very positive contributions to the church community.

The next Sunday we worshiped with the Matsudo congregation where Steve and Debbie Carrell work. They are entering their fourth year of work with the congregation and are greatly appreciated. There were 19 in attendance including one visitor who was introduced to the congregation by the minister at the Nakada church in Shizuoka. She is a second year university student at Chiba University. 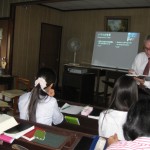 The congregation had requested a lesson on evangelism within the family. What better text than 1 Peter 3:1-7 which talks about wives who are encouraged to win their husbands “without  words by the[ir] behavior?” The main point of the lesson was to encourage everyone, husbands and wives, to put God first and seek to please him. Then through that lifestyle people would see what it means to be Christian whether they approve or disapprove. Live such good lives among the pagans that, though they accuse you of doing wrong, they may see your good deeds and glorify God on the day he visits us. (1 Peter 2:12)

Following tea time together we had another brief class on “Rejoicing in Hope.” That lesson was taken from Romans 5:1-11. Being justified through faith we have been granted three things according to the text. One of these is that “we rejoice in the hope of the glory of God” (Romans 5:2b). While meeting many different situations, our hope is strengthened knowing that God loves us (v.5) and will work all situations so that we will be transformed more and more into the image of his Son (vv.28-29).

Upon returning to Tachikawa Sunday evening we received a note from Shiro Obata. He has worked with the Nukada Children’s Home for forty years. This home was begun after World War II because of the numerous children without parents. O. D. Bixler was instrumental in helping to establish the home.

Twenty years ago brother Obata met a young girl at the home. He lost contact with her after she graduated from high school and began working. This past week he received a note from her asking if she could come visit him. She, her husband, and little son came to worship at Haruna. She was baptized and attends a congregation. She wanted her husband, not yet a Christian, to meet brother Obata. What a joy to be reunited and know that the encouragement and attention given a little girl was appreciated.

She wrote back after her visit at how wonderful it was to be reunited with this kind gentleman. Her husband was very impressed. We pray that he will be open to the Gospel and that the family will one day be united as a Christian family.

As I type this, the rain of the past three days has given way to a bright sunny day with a beautiful blue sky. I just bet we could see Mt. Fuji if we would go outside. However, we are packing to leave for Australia this afternoon.  We look forward to fellowship with missionaries there and learning about God’s kingdom there. While we will travel almost 10 hours, we only change one hour on the clock, but two seasons on the calendar!!