It is our fervent prayer that this newsletter finds you all doing well and enjoying the blessings of God’s bountiful grace.

We are grateful to God for His exceeding blessings to our Mission Ministry during August and September.  Through His grace, four souls were added to the Kingdom. Two of these new babes in Christ are the result of a culmination of efforts over the past three years.  They include one-on-one Bible studies; our Shizuoka English Bible Classes (SEBC); church attendance combined with individual and group fellowship; and the Let’s Start Talking (LST) program.  While rejoicing over these new converts, I share the sentiments of the Apostle Paul in writing to the church at Corinthwherein he in abbreviated fashion wrote: one planted the seed, another watered, but God gave the increase (1 Cor. 3:5-7). 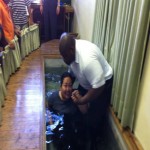 Misao Ikegaya (The baptistery is in the floor under the podium)

Those of you who have followed our reports over the years may remember that August is often when things temper down somewhat, insofar as the level of contact we have with many of our prospective converts/students. Many with whom we interact take summer vacations; others have travel priorities they pursue for business and/or pleasure purposes.  Thus, we were able to slow our pace a bit, shifting some of our focus toward administrative activities and housekeeping.  We took advantage of the limited lull and in turn, developed and put together several English Bible text books for use in our SEBC classes and one-on-one Bible studies.  I hasten to add however, there is still always plenty to do.  When things are a little less hectic, we simply shift our efforts toward pursuing some of our normal ministry/missionary endeavors; e.g., teaching Shizuoka English Bible Classes…albeit a lesser number of students.  I am also able to conduct research and study on behalf of future seminars or speaking engagements and contribute to sermon preparation.  Beyond being a housewife and mother, Etsuko’s activities parallel mind.

Our main focus remains studying with those we believe are the closest to obeying the Gospel.  In August one such person was one of our “Readers,” Misao Ikegaya.  We are blessed to share the good news I was privileged to baptize Misao on August 26th.  We were simply elated over seeing Misao being added to the Lord!  You may recall in our March/April Shizuoka Newsletter, Misao (along with her father, Yasushi,) was among the prospective converts we asked you to pray for.  At that time I wrote: “Unlike many, Misao has exhibited qualities that would make her a great Christian.  Her willingness to accept the truths contained in Scripture so readily is not only refreshing, but also an encouraging blessing to us.  We believe that it will only be a matter of time before Misao gives her life fully to the Lord.  She has openly confessed her belief in God.” 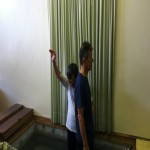 On September 2nd, one week following his daughter, Misao, coming to the Lord, Yasushi Ikegaya gave his life to the Lord.  It was a wonderful experience witnessing my fellow minister and co-worker, Brother Fumio Maeda, baptize Yashui into Christ!  Yasushi’s coming to the Lord was also a collective effort – made even more exciting because he was baptized on week after Misao obeyed the gospel. I know you can imagine how this father/daughter combination brought smiles to the faces and joy to the hearts of the members of the Nakada congregation.  Over the last three years, we studied with Mr. Ikegaya and the same collective effort I mentioned concerning Misao, also applies to Yasushi’s (1 Cor. 3:5-7).

With the onset of September our SEBC classes began anew in full swing.  We are optimistic God will bless our efforts through this initiative as He so graciously has in the past.  I wish to acknowledge and applaud the contributions of Margaret Hatcher and Karen Loveland who visited us recently as part of the Let’s Start Talking program.  As indicated in my last newsletter, these two ladies served faithfully and tirelessly during their time with us. The fruit we recently experienced most certainly includes their labors on our behalf.  We commend them for their contributions and again, thank you, the MacArthur Park congregation, for sending them our way. 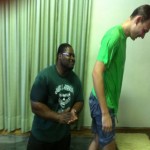 I want to share two other baptisms that took place this summer at the Nakada congregation.  They are Ben Wilde and Pristine Hysten.  Ben is the boyfriend of Kara Washam, the daughter of Brent and Cherlylee Washam.  Ben came to Japan as part of his Architectural studies at Texas A&M.  He had corresponded with me via email concerning his impending trip and informed me of his desire to visit us here in Shizuoka.  I met Ben during my last visit home.  By the grace of God, I had the privilege of studying with and baptizing Ben into Christ on July 2nd. We would have shared this with you sooner, but in deference to Ben’s request, we waited until Ben had an opportunity to communicate first with His parents.  His parents are not members of the Church of Christ. 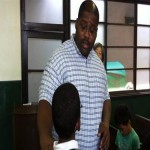 The fourth blessing of a baptism this summer came a little closer to home.  Our firstborn son, Pristine, gave his life to the Lord on August 16th.  Pristine had been considering this decision for some time, but because of his age, we wanted to be certain he was aware of what he was doing by way of commitment, maturity and sincerity.  Following several Bible studies with him, we are convinced of the sincerity of his biblical confession and dedication to follow Jesus.  Needless to say, as his parents we are overwhelmed with God’s grace!  We are proud of Pristine and his decision to become a disciple of Jesus Christ.

With the close of September, we celebrated the completion of our third year with the Nakada congregation.  We look forward to great things in the Lord in the future.  Thank you so very much for your continued prayers and support!

In Warm Regards and Love, Ken and Etsuko Hysten