The final two weeks in Japan have been filled with much travel. After returning from Australia, we regrouped and prepared to be away for ten days. We traveled as far west as Shizuoka and as far north as Ishinomaki. 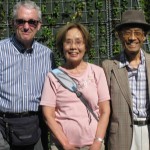 With brother and sister Sagitani

Before leaving we were invited for lunch with some long time friends who now live in Taitoku, Tokyo. Brother and sister Sagitani were wonderful hosts. He worked for many years with General Foods and their branch in Japan, Ajinomoto. After retiring he returned to school first at Harding University and then at the Harding graduate school in Memphis.

Following this he moved to Shizuoka, sister Sagitani’s home town, to work with the Shimizu congregation. He ministered there for eight years until he retired. His memory is failing, but he and his wife continue to be an encouragement to the Ochanomizu congregation. We had a wonderful time of table fellowship together. 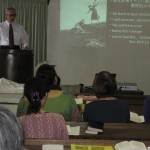 Speaking to the Nakada church

Early Sunday morning, October 7, we headed west to Shizuoka. We worshiped with the Nakada church where Dwight spoke. Following the assembly we had a time of fellowship together. This congregation has had four baptisms in the past three months. You may read about it in Ken and Etsuko Hysten’s report for August and September. 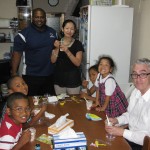 Visiting with the Hysten Family

We stayed with the Hystens whom we have known since before they were married over twelve years ago. They first worked in Mito and then Okitsu and are now working with the Nakada church. They have four wonderful children and it was a joy to be with them. 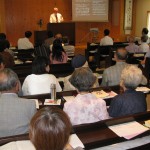 Speaking to Christians from six congregations in Shizuoka

Monday, October 8, was a holiday in Japan, Sports Day. The churches in Shizuoka Prefecture always have a joint worship assembly together on that day. Dwight was invited to speak in the afternoon on the topic of Rejoicing in Hope. He used Romans 5:1-11 as a base text to show that Christian hope has three components: an understanding of God’s promises both in the future and now; a trust in God’s ability to do what he has promised; and finally patience to wait for God’s timing. So hope is born of trying circumstances as we walk by faith, persevering through those times with God’s help as he molds our character to be like his Son. That kind of hope never disappoints us (Romans 5:3-5). 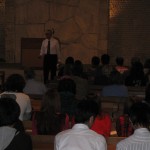 We quickly took the Shinkansen (Bullet Train) back to Tokyo and prepared for seven days on the road. Tuesday we took a train to Omika for the Ibaraki Christian University chapel. Dwight spoke about “Dirty Dishes and Rotten Fruit” using Matthew 23:23-28 and Luke 6:43-45. He was also asked to speak to one of Yoshiya Noguchi’s religion classes about why he and Josephine decided to come to Japan. This was in conjunction with an exhibit of a lady who befriended mixed Japanese-American babies after World War II. She was a Christian who saw the value and worth of every one, even these mixed babies. The class toured the exhibit as part of their class assignment. 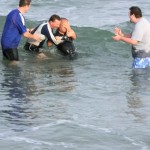 Baptism in the Pacific Ocean

Following chapel and the class at ICU, we had a curry rice lunch furnished by the Omika congregation. During lunch we talked with Mike McLain. He teaches as an adjunct teacher at ICU and also has an English school he and his wife, Tomoko, operate. It was good to visit with him. Mike works with the Hitachi Taga church as well as with the a cappella singers Voci Seraphim. They visit congregations and encourage churches in their singing. He also shared with us the coming baptism of a former student at ICU. What wonderful news. 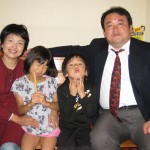 Yoshiya and Emiko Noguchi and their children

After lunch we were met by Emiko Noguchi, Yoshiya’s wife, and their two children. This was the first time that we had to visit with them on this trip. Our paths had not crossed until this time. We had supper with them and an enjoyable time together.

From Ibaraki we traveled north to Ishinomaki. We took a round about way to get there via trains because the direct line is still washed away from the earthquake and tsunami from March 2011. Jonathan Straker met us at the station. He took us to a hill top park where we could view the city. It is still just a flat area where many houses and businesses were at one time. There is much activity in the city, but there is still so much needing to be repaired or waiting for word from the government whether they can rebuild or not. 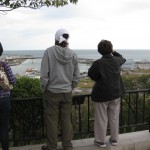 Jonathan told us many stories of people who had lost family members in the tsunami. There is still so much hurt and pain from that experience. It will take many years to overcome the physical damage done to the city and area, but the emotional scars may never be completely healed. 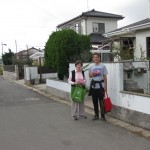 Passing out tulips in Ishinomaki

While in Ishinomaki we helped pass out tulip bulbs. Yes, tulip bulbs. A wealthy couple donated one thousand packages of tulip bulbs to be distributed to people in the area. They would plant them and then enjoy the beautiful flowers in the spring. Hopefully the blooming of these bulbs in the spring throughout the city would be encouraging. Each package included a card with Isaiah 40:31 on it and a contact number for those needing volunteer help.

We had a wonderful time of fellowship with Jonathan and Michiko Straker. They moved into the area in January 2012 and have a two year commitment to work with the relief efforts. They met while Jonathan was a missionary in Sendai and Michiko was a student. They have three cute children. 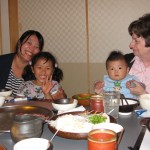 Visiting with the Kimatas in Utsunomiya

From Ishinomaki we stopped over in Utsunomiya, Tochigi Prefecture, to see a couple Josephine taught in Memphis. He is a thorasic surgeon in the prefectural hospital in Utsunomiya. They had visited us in Tachikawa back on August 19. They went to Disneyland the next day. Dwight had a good conversation with their six year old daughter about her visit there. She really liked the cars she could drive by herself. 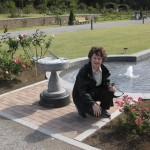 Saturday, October 13, was a rest day. We stayed in Maebashi and toured a beautiful rose garden. This city is the prefectural capital for Gunma Prefecture.

Early Sunday morning we headed to Haruna to worship with this congregation which was started by brother and sister Obata nine years ago. It is a small congregation, but has a good image in the neighborhood. They are constantly sowing the Gospel Seed through their service to the community.

Monday was the Tokyo West Ministers’ Meeting. There were six ministers representing six congregations in addition to us. Haruna is a long distance from many congregations so the number was smaller than usual. Brother Obata shared a lesson about sharing the Good News. It is not enough to preach a sermon. One must live it in daily life through service to others – mind and hand. There was a lively discussion following. 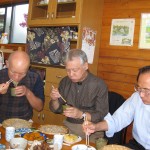 Eating soba together at ministers’ meeting

We dismissed for lunch at a neighbor’s house of homemade soba noodles and tempura vegetables. There were so many other good things to eat that I cannot list them all. Again we had great fellowship. There was one minister we had not seen for a number of years. He shared with the group that there had been three baptisms in his congregation. Two were a couple in their forties. That makes eight baptisms recently in three congregations. Little by little hearts are changed by the power of the Good News.

The afternoon was spent in discussions about up coming events within our fellowship of churches. Dwight gave an update on fund raising for the relief efforts. There was discussion about how we could help congregations without regular ministers.

Paul put it very well as he wrote to the Corinthians. The god of this age has blinded the minds of unbelievers, so that they cannot see the light of the gospel of the glory of Christ, who is the image of God. (2 Corinthians 4:4) There is so much in the world which blinds people causing them to not be able to see the wonders God has prepared for those who love him. This is so true of Japan where the nation itself becomes a religion. Becoming a Christian in many respects sometimes means one must stop being Japanese. But we do see people who get a glimpse of the light of the gospel of the glory of Christ and surrender themselves to a loving God.

As this trip comes to a close, we give thanks to the many who have hosted us and encouraged us both in Japan and in the U.S. We give thanks to a loving congregation, Park Avenue, who has for many years given us the opportunity to continue to serve in Japan. While most Japanese have never visited the Park Avenue congregation, many know of her love for the Japanese people and commitment to encourage Christians in Japan through us. May God always be glorified.