Greetings from Shizuoka, Japan!   We pray each of you in this New Year is experiencing an abundance of God’s blessings. 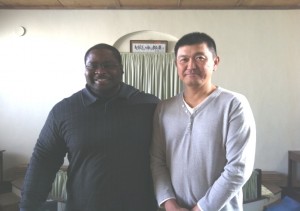 Through God’s Grace entering into the New Year here in Japan, has been a smooth transition. As the old year came to a close, we renewed our efforts to spread the good news about our Lord, continuing to make Him known to the lost and emphasizing His ever present grace and love to those previously saved.  The Christmas and New Year Holiday Season afforded us good opportunities to magnify the name of our Lord.  Thankfully we were also able to use the occasion to remind the membership of the importance of the birth of Christ – providing special insights to our newest converts.  Our meeting times together have been fluid!  How wonderful it was to teach those who do not know virtually anything about God or the birth of His Son, Jesus Christ.  Informing them of His purpose for coming into the world is a new revelation for many here.  It was a joy to witness members of the Nakada congregation previously won to the Lord, expressing how much they value their relationship with our Lord and His church.  It was refreshing to hear some of them say with confidence they realize the greatest gift of the Holiday Season is having the awareness they have salvation in and because of, Christ and His life giving sacrifice.

Our priority of emphasis on soul winning has already borne fruit in the New Year.  I am happy to report our Lord has already blessed us with the baptism of a new Brother in Christ, Yoshitaka Kakegawa. Please see more about “Yoshi” below… 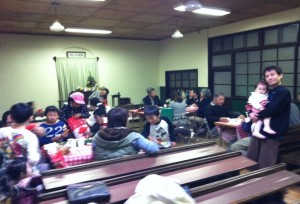 As the 2012 year came to a close, we put our energies into finishing the year on a strong note.  Every December we host our annual “Holiday Meal” at the Nakada Church of Christ.  Every year, we order and cook turkey and other foods to share with our students.  In previous newsletters we have mentioned that Turkey is not a native bird to Japan so for many of our students, it was the first time for them to eat turkey.  As you can imagine we expend a lot of time and effort into preparing so much food.  Thirty people came to share a meal, fun and Christ with us.  The Japanese in general, love events that surround ceremonies and festivals that have a traditional feel.  The business community also loves any opportunity to ‘make a buck [Yen],’ therefore they are very willing to maximize the commercialism of Christmas.

Not long ago a television reporter walked the streets of Tokyo interviewing people about Christmas.  The reporter stopped one woman on the sidewalk, and asked, “What is the meaning of Christmas?”  Not having a clue as to the true meaning, she laughingly responded, “I don’t know.  Isn’t it the day that a man by the name of ‘Jesus’ died?”  Unfortunately, ignorance about our Lord and his purpose for coming into the world (Luke 4:18-19; 19:10) is far too prevalent here. Thankfully, with God’s help and your support, we are making progress toward instilling the truth about our Lord and the Christmas Holiday.

We are in our third year as missionaries with the Nakada Church of Christ and it is this year we set as an objective, encouraging the majority of the members of the congregation to become more proactive in their personal evangelism outreach efforts. We also envision placing greater emphasis on building “community” among members of the congregation as a corporate body as they interact with one another.  The more we understand “unity” as Christ intends, the more we will be devoted to one another as Christ has instructed.  If we can improve in these areas, we can become more fruitful in our growth by way of conversions.  Concurrently, we will become more successful in retaining those we have previously won to the Lord.  These have always been goals and milestones we have sought to achieve; however, we realized the process of grooming and maturing our membership would take time.

In our first year with the Nakada congregation we were determined to get the ball rolling in establishing plans for evangelizing the immediate area surrounding the Nakada congregation.  With God’s help we steadily saw our SEBC class numbers increase.   Through the grace of God church attendance has been growing and some of our students are now attending Sunday morning’s worship assembly on a regular basis.  God has certainly blessed our partnership!  When we began serving with the Nakada congregation, the average Sunday morning worship attendance was approximately five members, although the membership itself was about 12.  God has blessed us to now enjoy a regular attendance of 25 or more.  We are optimistic God will continue to add souls to this growing body. 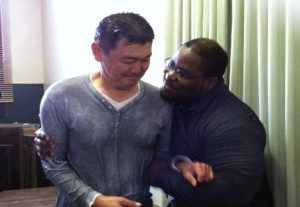 As I mentioned above, Yoshitaka Kakegawa is the most recent addition to the Body of Christ at the Nakada congregation.  “Yoshi” and I have been studying together for about five years.  We began our association not long after our coming to Shizuoka.   He is one of the people I mentioned during my presentation report to you during my last visit home.  As I mentioned then and in one or more of my previous newsletters, “Yoshi” is an avid mountain climber; he is also an all around sportsman.  At the end of 2009, Yoshitaka and his wife and a friend took a mountain climbing trip to the Japanese Alps.   It was during this fateful trip that his wife while climbing became very ill.  As a result of her illness and the severe weather conditions, they became stranded in the mountains for almost a week.  At the end of their amazing ordeal, they were rescued and emergency air-lifted out of the mountains by helicopter.  You can imagine my surprise when I heard of Yoshitaka’s emergency rescue while watching the national news.  By the grace of God, Yoshitaka, his wife and friend survived the very harsh conditions.  During his difficult ordeal, Yoshitaka lost some of his fingers and toes. Following his release, we were able to resume our classes together again.  I have seen a great change in Him and I can see that his heart is opening up more and more to Christ.  I am sure many of you prayed for “Yoshi” as we have requested prayers for him in the past.

As always, we continue to solicit your prayers and thank you for partnering with us in reaching the lost for our Lord in Japan.  Please keep us in your prayers…

With Warmest Regards and Love,