Because of our busy schedule I’ve been unable to find the time to write a report since my last one, August 29. Almost seven weeks have passed since then so I’m going to break up this second report into manageable pieces. 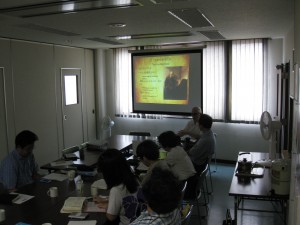 Class with the Tachikawa church

The classes at Ochanomizu and Tachikawa went well. These were from 1 John. Like his account of the life of Christ, John gives his goal for this letter. I write these things to you who believe in the name of the Son of God that you may know that you have eternal life. (1 John 5:13, ESV) John wanted his readers to gain confidence in their salvation and what Christ had and continues to do for them. For John eternal life was not something after death, but something the believer possessed now. It is an atmosphere in which the believer lives and moves. There are some wonderful texts in this short letter which inspire confidence and hope. The four lessons were received well. 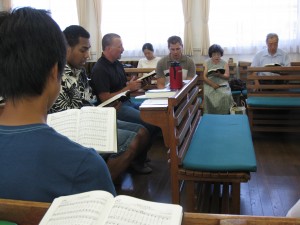 Each Sunday we worshiped with a different congregation. This is such a blessing since we get a glimpse of the breadth of the work in Japan. Over the years we have worshiped with over seventy-five percent of the congregations. We again worshiped with the Hitachi Taga and the Tomobe churches in Ibaraki Prefecture. The Park Avenue church collects support for Marlin and Jean Ray who ministers in Tomobe. They have recently lost $1000 per month when one supporter lost his job. They need to make this up. We are always encouraged by Sugao Tadokoro who is the minister of the Taga church. 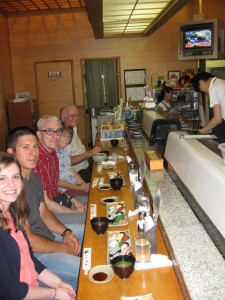 At sushi restaurant with the Rays and Hanks

Every three years the Park Avenue congregation sends a member with us to Japan to view the works the church is involved in. This year Jonathan and Mistie Hanks took time to come and be with us. During their time here they were able to worship with two congregations – the Tomobe and Ochanomizu congregations – as well as learn some about other works and Japanese culture/history. The Tomobe church is in a rural part of Japan while the Ochanomizu church is in the middle of the world’s largest metropolitan area, Tokyo. 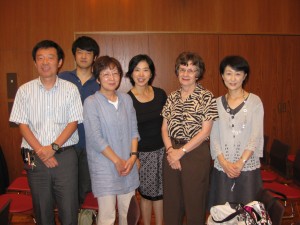 Josephine with three of her former students

On September 15 we worshiped with the Ochanomizu church. I shared a bilingual sermon and Josephine had an afternoon class for the ladies. We had a wonderful surprise that day as three of Josephine’s former students came to worship. One came with her husband and son. They stayed for the fellowship meal afterwards. Only one of these is a Christian. The Hanks were able to meet many different believers.

One Wednesday before the evening class an older member of the Ochanomizu church took us out for supper at a little soba (buckwheat noodles) shop in the heart of Tokyo. She is in her late seventies and has been a member of the Ochanomizu church for many years. She still lives in the house that her father built squeezed in between tall buildings in Chiyoda Ward of Tokyo. Her grandfather started a bookstore in the area which was carried on by her father, her brother, and now her niece. 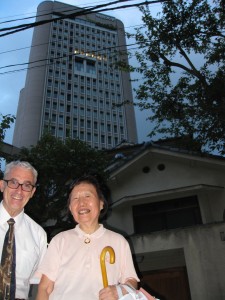 The Hanks traveled to the airport in the middle of a typhoon and made it back to Memphis safely. After seeing them off at the bus stop we returned to Tachikawa for the annual Japan School of Evangelism’s Founding Lectureship. Tadayoshi Aikawa gave two lessons on the Restoration Movement which is his special area of study. He has a M.A. in the Stone-Campbell Restoration history from Abilene Christian University. Following the lectureship the teachers met to plan for the next school year which begins in April each year.