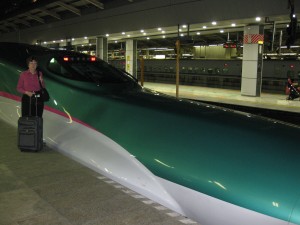 Each year we purchase a Japan Rail Pass to go to distant congregations. This year our travels took us up to almost the top of Honshu (main island) and to half way down to the other end. Our first Sunday was with the Hachinohe congregation. They invited members from the Misawa military congregation and the only member from the Morioka congregation to also attend. I shared two lessons and we had wonderful fellowship meals Saturday evening and Sunday following worship. 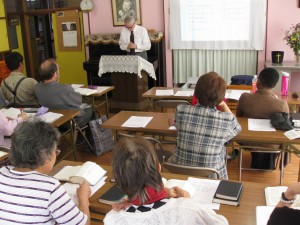 Worship with the Hachinohe, Misawa, and Morioka congregations

In between the two Sundays we took a day to visit Shiro and Rumiko Obata in Haruna, Gunma Prefecture. They minister to the Haruna church which was begun in 2003. They both have been great encouragers and helpers since first meeting them in 1969. They took us to Karuizawa to see the summer cottage used by missionaries during the hot, humid months of the summer. It was a refreshing day out of the city into nature. 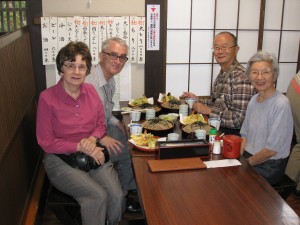 Lunch with Shiro and Rumiko Obata in Karuizawa

Another day we took a day trip to Matsumoto in Nagano Prefecture. This city is famous for its black castle keep. We also learned about Clement, a French Catholic, who was one of the first missionaries in the area in the 1880’s. He wrote the first Japanese-French dictionary. The house he built in 1889 is near the Kaichi School which is the oldest elementary school in Japan founded in 1873 under Emperor Meiji.

On our travels to Kojima we went by Toyama in Ishikawa Prefecture to visit a couple of our former students, but they had a sudden scheduling conflict and we were unable to visit them. However, we did get to see a new part of Japan and visited yet another castle keep in Kanazawa. 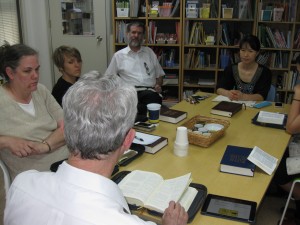 Worship with the Kojima church

The second weekend we stayed with Brent and Sandy Rogers who are vocational missionaries in Kojima, Okayama Prefecture. They operate an English school to earn a living and then teach Bible classes. We worshiped with them and had three classes during our stay. Brent was not feelling well while we were there and found out he had to have surgery for kidney stones after we left. As I write he is still recovering. 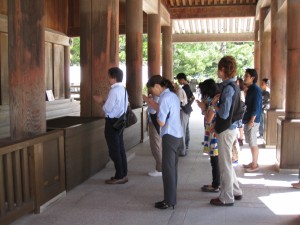 After leaving Kojima we went to the two least populated prefectures in Japan – Shimane and Tottori – next to the Sea of Japan. Our purpose there was to visit the Izumo-Taisha Shrine where Shinto is thought to have originated. It is a shrine where Okuninushi-no-okami is worshiped. Each October all the eight million gods of Shinto assemble here to determine the course of events for the next year. We were struck again at the futility of idol worship. 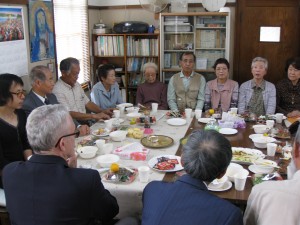 Fellowship meal with the Katsuta congregation

We returned to Tokyo and prepared for the seminar with the Katsuta church. Tsugisada Fukuyama is the minister for this congregation and also the editor of the Fukuin which is a monthly magazine among churches of Christ in Japan. He is in his early seventies and seeking a replacement as his health declines. He has worked with this congregation for almost thirty years. We found the congregation very lively with some younger members as well as elderly members. One member who is ninety-four was baptized two years ago. The Gospel still has impact in people’s lives.

The week of October 7 was filled with study and writing. I had been asked to put the lesson given at the August Ibaraki Summer Seminar into writing for the Fukuin magazine. That took some time to write first in English and then translate into Japanese so it could be checked and corrected. That was sent off and should be included in one of the next issues. I also prepared for the lessons to be given in Shizuoka.

The next Sunday we left at six in the morning for Shizuoka to worship with the Nakada church. Following worshiping with them we had a wonderful fellowship meal together. We were able to visit with a brother we first met while missionaries in the early 1980’s. The next day was the area wide worship for churches in Shizuoka Prefecture. Seven congregations were represented in the fifty who attended. The morning lesson was given by the minister at Numazu, Tomoyuki Shinozaki. He had an excellent lesson from Psalms 42-43 entitled “Where Is Your God?” My lesson from Acts 3-4 in the afternoon tied into his. Salvation is found in no one else, for there is no other name under heaven given to men by which we must be saved. (Acts 4:12).

Earlier this morning I completed the final lesson for the meeting in Okinawa this coming Friday to Sunday. There is still work to be done on those lessons, but the end is in sight. We leave early Friday morning to fly to Okinawa to be with the Naha congregation. We will return to Tokyo Monday morning and participate in the ministers’ meeting in Matsudo. That will conclude our work on this trip. We have been so blessed and encouraged by what we have seen and learned.