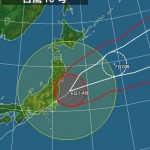 As I begin to write this report, we have just been through typhoon #18. Our travel plans for today were canceled because the morning schedule for the Shinkansen (Bullet Train) was suspended due to heavy rain and high winds. Within six hours the typhoon had blown further north and we welcomed blue sky and bright sunshine. 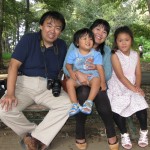 On September 23, a holiday marking the beginning of Autumn, the Kimata family visited us. They live in Utsunomiya, Tochigi Prefecture. We have known them since they were in Memphis while Dr. Kimata did research at the University of Tennessee. They now have two children and Dr. Kimata is in charge of surgery at the Saiseikai Utsunomiya Hospital. 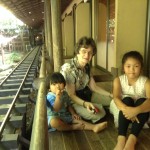 They took us to a restaurant where the food is served via a train. The children enjoyed that a great deal and we enjoyed being with them. Afterwards we went to the Edo-Tokyo Outdoor Architecture Museum. They also had a special exhibit for models and pictures of some of Studio Ghibli’s movies. It was a wonderful day and a good break from study.

We had our final class with the Ochanomizu church September 24. This will be the last time we would see many of them until next year’s visit (if the Lord wills). Each year of late it seems that someone we’ve grown to know and love dies so saying good bye is meaningful. 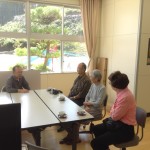 Brother and sister Obata escorted us to Ishinomaki, Miyagi Prefecture, where we did some work following the earthquake and tsunami of March 11, 2011 (Japan’s 311, three eleven). We jumped at the opportunity to revisit the area three and a half years after the disaster. We first visited the temporary housing complex where we had a barbecue for the residents in November 2011. I even played with one of the children that was so interested in our barbecuing techniques back then. His little sister was only a little more than a year old at the time. 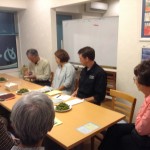 Sitting in on meeting with Strakers

We also visited Jonathan and Michiko Straker who live in Ishinomaki and are working to help the community rebuild as well as to plant a church. Great strides have been made, but there are still several thousand living in temporary housing. There is also a great deal of work being done to level mountain tops and prepare level safer places for permanent dwellings. We revisited the city of Onagawa where our team worked three years ago. We also visited a school in Minami Sanriku that was heavily damaged, but all students and teachers were saved by quick thinking administrators. The school has been refurbished to provide escape paths to high ground as well as moving classrooms to the second floor. Brother and sister Obata were at the opening ceremonies for the school. 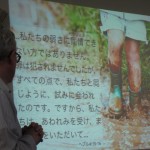 After these two long days revisiting the areas struck by the disaster, we turned around and traveled to Tomobe to have an evangelistic meeting. Saturday evening a group of about twenty assembled with three of those being non-Christians. I spoke on why I became a Christian. 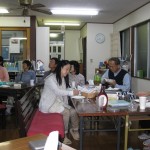 Meeting with the Tomobe church.

Then Sunday morning for worship I shared a lesson about Jesus healing the leper. Like leprousy, we are walking death because of sin and there is nothing we can do to heal ourselves. Jesus came to heal us, to save us, and restore us to a right relationship with the Creator God. Several appreciated the parables and examples I used to explain sin and God’s forgiveness. 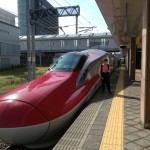 The day following our work with the Tomobe congregation, we began our two week Japan Rail Pass. This is a very inexpensive way to travel to churches more distant from Tokyo. We traveled to Omika to speak in chapel at Ibaraki Christian University and to visit with the Noguchi family. They suffered a total loss of their house and possessions a year ago, but now have a new house. We also enjoyed playing ball with their two children. 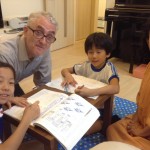 While we have the pass we often travel to places of cultural and historical interest in between Sundays. This year we went to Akita which is about on the same latitude as New York City. This was the first evangelistic outreach by a missionary from the Stone-Campbell Restoration Movement. The Charles E. Garst and George T. Smith families moved to Akita in 1883 to plant a church. To their knowledge there had only been one other foreigner to visit the area before them. Imagine the novelty of having foreigners in your city and especially ladies with blonde hair.

They moved to Akita shortly after the Meiji Restoration which restored power to the Emperor from the Tokugawa Shogunate. There were only thirty-six miles of railroads at that time in Yokohama-Tokyo and Kobe-Kyoto. They traveled by ship up the east coast of Japan over the top and then down the west coast to the port which serviced Akita. It took a great deal of courage to do that. Mrs. Smith and one of their children died during their time in Akita. According to records, they were buried in a Buddhist cemetery (the only kind they had at the time). It makes you appreciate those who went before at great sacrifice. 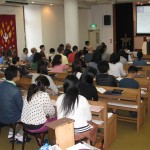 Worship with the Mito church

On our next to the last Sunday on this trip, we traveled to Mito to meet with that congregation. It had been two years since we worshiped with them. Last year we exchanged our time with them to go to Okinawa for an evangelistic meeting with the Naha congregation.

The Mito church continues to exercise a positive influence in the community through their Agape Ministry helping the homeless. They have English Bible study twice a month with about seventy, many non-Christians, meeting to study the Bible in English. There is also a group of Assistant English Teachers from the U.S. who help with these English classes. They also have a Karate Club twice a month and several other avenues to reach out into the community. Joel Osborne is resident missionary working with Atsushi Tsuneki, the minister.

This brings you up to date on our activities through October 5. Our last week is upon us which brings with it a lot of mixed emotions – leaving Japan, being reunited with family in the U.S. Thanks again for your continued interest in our ministry and your support.