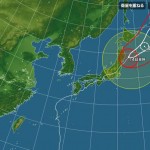 As I write this Monday morning, October 13, we are awaiting the arrival of yet another typhoon. This one is number 19 and has already done some damage to Okinawa and is now making land fall on Kyushu. This will disrupt travel as number 18 did for us last Monday. Now as I finish this on Tuesday morning we have bright sunny skies. Thankfully the typhoon is well out of the way for our departure from Japan Wednesday, October 15. 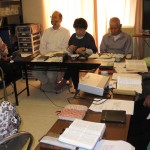 We returned Sunday evening, October 12, about 8:30 after worshiping with the Hachinohe congregation in Aomori Prefecture. This is the top most prefecture on Honshu, the main island. The distance from Tokyo to Hachinohe is about like from Memphis to Chicago. We made it by Shinkansen (Bullet Train) in three hours and that with seven stops.

The Hachinohe congregation has been in existence for more than fifty years. Brother Shiozawa was the minister who did pioneer church planting in the Aomori area. He would make a circuit visiting several house churches in the prefecture. This continued until he was no longer able to travel. At that time they began meeting in the city of Hachinohe.

Twelve met Saturday afternoon for two lessons on “God’s Great and Precious Promises.” This was part of the third lesson I gave for JSE. There was some discussion about Jesus’ promise to prepare a place and return from John 14. Two of the sisters had lost husbands so I’m sure this was in the back of their minds. I was once again impressed with the great and precious promises God has given us (2 Peter 1:3-4).

Sunday morning ten of us gathered. Two brothers were unable to attend. As we sat around tables in a circle I could not help but think this was probably more like the first century Christian assemblies than our large worship settings in pews. They meet in the home of one of the members in an “upper room” which is about nine feet by twelve feet.

Since there were only two men present, I was asked to make comments for the Lord’s Supper as well as give a sermon. Like the first century church, we assemble around the Lord’s Table every Sunday to remember. Taking my comments from the well used text in 1 Corinthians 11:23-29, I made two points.

First, “recognizing the body” points to both the vertical relationship with Christ and our horizontal relationship with each other. This is the one activity we always do together as a body of believers, the body of Christ (Ephesians 1:22-23). We partake of the one loaf which further signifies our unity as one body (1 Corinthians 10:17).

Second, Paul tells us in this text that we are to “proclaim the Lord’s death until he comes.” Death can be a morbid topic, but I don’t think Paul intended it to be taken that way. In another text (Romans 5:8) Paul says that “God demonstrates his own love for us in this: While we were sinners, Christ died for us.” The proclamation of the Lord’s death is a proclamation and reminder of God’s love for us. So together we remind each other of God’s love for us and in that proclamation gain strength to continue for another week. 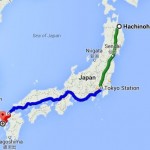 Following the sermon and the time together around the Lord’s Table, we met around another table for lunch together. The feast included curry rice, fukujinzuke, rakkyo, apples, persimmons, pickled egg plant and radish, apricot jelly, baked apples with yogurt and strawberry jam, cake, drinks, and lively conversation. They have a meal together each Sunday. Of course, not as grand at this was, but still fellowship together since several live a distance from the meeting place.

When we exited the wickets in Tachikawa Sunday evening that brought to an end two weeks of travel using our Japan Rail Pass. In all we traveled a little over seven thousand kilometers or about forty-four hundred miles. Latitudinally and longitudinally we went as far north as Chicago, Illinois, and as far south and west as Lubbock, Texas, from Memphis, Tennessee.

In between Sundays this time we visited the town of Shimabara in Nagasaki Prefecture, Kyushu. This area was the scene of a ferocious battle from December 1637 to April 1638. This was a peasant rebellion against the government’s high taxes and harsh treatment. Added to this was the persecution of Christians and the suppression of Christianity by the Tokugawa government. Most of those participating were Catholic Christians. 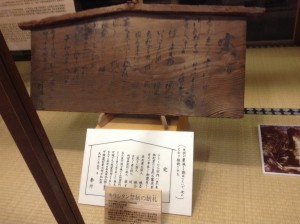 Sign offering reward for turning in anyone who was a Christian and stating punishment for those who were.

Some twenty-seven thousand rebels faced a Tokugawa governmental army of one hundred twenty-five thousand. The battle continued from late December 1637 to April 1638 when the Hara Castle fell to the Tokugawa forces. An estimated thirty-seven thousand rebels and sympathizers were beheaded. The castle was burned to the ground and the remains of those killed were buried with the castle remains. 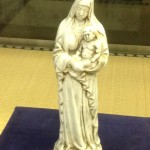 Mary and Jesus disguised as the Buddhist idol Kannon

Because the government thought the European Catholics were involved in the rebellion, they expelled the Portugese traders. The following year, 1639, the seclusion policy was strengthened and the ban on Christianity was strictly enforced. This led to believers going underground. They came to be known as Kakure Kirishitan or “Hidden Christians.” Many artifacts of these hidden Christians remain. With this came the total suppression of Christianity and the tightening of Japan’s national seclusion from outside countries. This lasted until 1873 when the ban on Christianity was lifted.

At another museum we learned that a special festival held each year in early October in Nagasaki Prefecture was originally “to prohibit Christianity and to protect Buddhism and Shinto shrine[s] under the control of the Nagasaki Magistrate’s Office.” This was just another reminder of the undercurrent of opposition to Christianity in Japan. 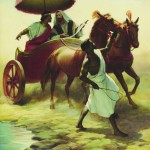 “Look, here is water. Why shouldn’t I be baptized?”

My lesson for the Omika church on September 31 was transcribed and printed in the October issue of the Fukuin magazine. That lesson was from Acts 8:26-40 entitled “Here Is Water.” Thanks goes to the minister of that congregation for transcribing the lesson from tape. He corrected my Japanese so it reads smoothly.

This brings to a close our travels and ministry in Japan for 2014. We are deeply appreciative to the many who have shown us kind and loving hospitality over the past ten weeks. We are also thankful for you and your words of encouragement along the way. We give thanks to the Father for His kind protection and provision. May we continue to bring Him glory through our lives whether in Japan or elsewhere.