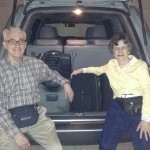 We’ve just completed two weeks into our eighteenth consecutive ministry trip to Japan. We left Memphis on a 6:30 a.m. flight to Detroit on August 3 arriving in Japan some twenty-one hours and a day later. After a two hour bus ride to Tachikawa we were greeted by Nao and Noriko Fukushima who minister to the Tachikawa Church of Christ.

Jet lag for us does not seem to be quite as bad going west as when we return. Generally you wake up early in the morning and begin to feel very sleepy late in the afternoon. The first day here was filled with setting up housekeeping, getting a work space prepared, and going to Costco for food for the time we are here. Buying larger quantities of things does save. 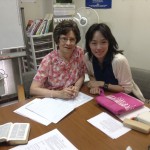 On our second day here, Josephine began her Thursday afternoon classes with three ladies. She is studying John with them. All three attend the Tachikawa church off and on and one is not yet a Christian. Josephine has taught ladies like this for over twenty years and adapts her lessons to their Bible knowledge and English ability. She will continue these classes for six weeks. These are days with three to six hours of one-on-one teaching. 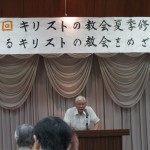 On our third day we traveled to Tomobe to connect with Marlin and Jean Ray. They graciously agreed to take us to the Seventieth Annual Ibaraki Summer Seminar organized by the Takahagi and Hanakawa Churches of Christ. While neither of us had any teaching responsibilities, it was a very good opportunity to meet many friends 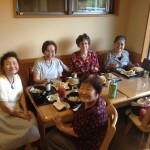 whom we would otherwise not have the opportunity to meet. We reacquainted with Josephine’s home stay host from 1969 and a brother we hosted in Memphis in 1974. There were many old friends and new ones. 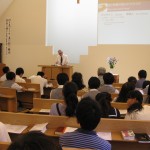 Our first Sunday was with the Omika Church of Christ. This congregation used to meet on the Ibaraki Christian University campus but now has a meeting place off campus. Every Tuesday during the school year they host a curry lunch for the students following chapel. This Sunday there were about thirty junior and senior high school students in attendance in addition to the twenty-five or so members. Attendance at a Christian worship assembly is one of their summer “homework” assignments for the student’s Bible classes at 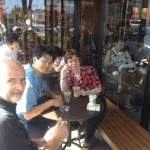 Ibaraki Christian Jr. and Sr. High Schools. I spoke from Luke 18 about the prayers of the Pharisee and tax collector. Makoto Tateno is the new minister for this congregation. Part of the time while studying at the Harding School of Theology he worshiped at Park Avenue. He has been welcomed by the members and has begun a good work there. 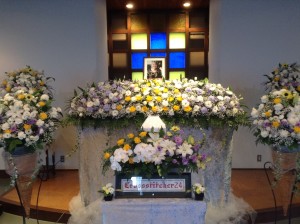 Debbie Carrell, wife of Steve and missionary since 1979, was hospitalized earlier this year as she battled leukemia. She was in the final stages of the disease. We visited her August 10, but she was not very responsive due to the pain medication she was taking. We visited with Steve and tried to be a support to him. Their son and his family were able to visit in June. She was allowed to return home briefly during their visit. Their daughter came for a week just before we arrived. She was alert for both their visits. 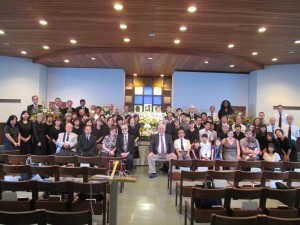 Early Wednesday morning, August 12, upon returning from a walk I heard a telephone conversation between Steve and Nao. When the conversation ended, I found out that Debbie had died just a few minutes before. Nao and I quickly prepared to go to Steve. When we arrived they were taking Debbie’s body away. We spent the rest of the morning and some of the afternoon with Steve and the funeral director helping as we could.

The cremation was Friday afternoon and many from the Matsudo Church of Christ where Steve and Debbie have ministered since 2007 were present. There was time for prayer, scripture reading, and singing, “Blessed Assurance.” Her remains will be interred in the Tachikawa church cemetery and in Texas where some of her family are buried.

Her memorial service was Monday, August 17, at the Tachikawa church building. Over seventy were in attendance coming from as far away as Shizuoka and Gunma Prefectures. It was a wonderful tribute to this Christian lady and her hope and courage in the face of death. Two sayings she would frequently repeat, “God will provide.” and “This too will pass.” She encouraged all the Christians who visited her with the reminder that we will meet again. She will be missed. Both the Matsudo and Tachikawa congregations have done a great deal to help remember her and to support Steve in his loss. 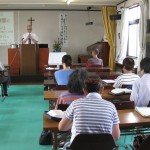 Our second Sunday was with the Ishioka Church of Christ in Ibaraki. The minister here was a Bible professor at ICU for many years and continues to teach and write. Sixteen were present for the worship with a time of fellowship afterwards during a pot luck lunch.
In between these things, we continue to study and prepare for future lessons. We continue to remember all those who fellowship with us in this ministry through prayer and support. May the Lord continue to be glorified.