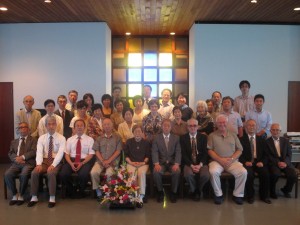 This will be our final report for our 2015 trip. August 4, when we arrived, seems a distant past. The weather was hot and humid with long days. Now we are in cooler temps and the sun is further south. It has been a very good trip and we have been blessed in many ways.
After our guests left September 21, we attended the Japan School of Evangelism Founding Lectureship. This is the twenty-sixth year for the school. While the number of students has been small, it has been an encouragement to the churches in Japan. 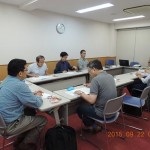 Following the lectureship we attended the overnight teachers’ meeting. This is a time to discuss curriculum, future topics of study, how to better help local congregations. I received a few assignments for next year at the meeting.

September 24 marked the third and final lesson for the Japan School of Evangelism. “Father, Son, Holy Spirit and the Christian” was the topic for this last lesson. I had been teaching this at Ochanomizu over two classes. It is amazing how the Father, Son, and Holy Spirit play important roles in our daily Christian life. 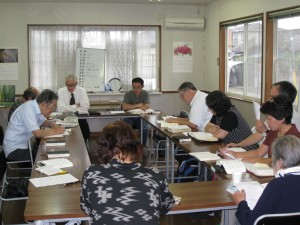 Our eighth Sunday in Japan was with the Shirosato congregation in Ibaraki. This is a small congregation which meets around tables for worship. We had a wonderful time of table fellowship following the worship. One brother named his dog Ike after former president Dwight Eisenhower who was in office when he was a young man. He had suffered a stroke since we were with this congregation last year. One lady had been studying the Bible for many years, but was not yet a Christian. She still attends often because she is drawn to Jesus Christ.

Each year we purchase a Japan Railways Pass for distant travel. We had scheduled to travel to Sendai and Hachinohe this year. Purchasing regular tickets to these two places would be much more expensive than the two week pass, so there is savings in buying the pass in the U.S. It also allows us to travel to other places during the week to do cultural and history study as well as see new areas of Japan. 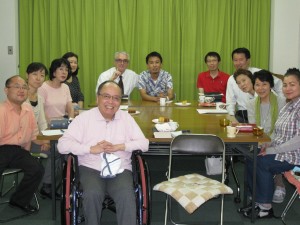 We learned that the visit to Sendai was not convenient for the people with whom we were going to visit or for the church. We quickly arranged to worship with the Warabi congregation. They are a small congregation of about twenty-five and have purchased a four story building near the train station. We’ve known some of the members for over 30 years. In the afternoon we reviewed the church situation with them and talked about outreach. They had some interesting questions to ask me as well: Is baptism necessary for one to become a Christian?; Is our salvation secure; once saved can we be lost?; What is your opinion about the Pope as he visits the US?; Is it necessary to have the Lord’s Supper (Communion) every Sunday? Interesting topics which gives an idea of some of the things they are thinking about. It was a very encouraging Sunday for us. 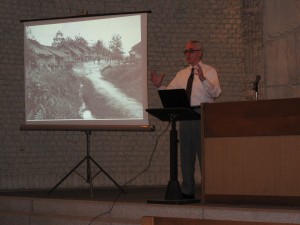 On Monday October 5, we went to visit the Noguchi family. Yoshiya is minister for the Ochanomizu church as well as chaplain for Ibaraki Christian University. They have two bright children, eleven and nine. It is always an encouragement to be with them. The following day I spoke in the ICU chapel about Jesus being the “Peace Child” sent by God to restore us to God. That was followed by a curry lunch sponsored by the Omika church of Christ. 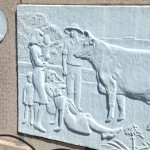 At this point Josephine and I took three days to travel to Izukyu-Shimoda. This is where Commodore Perry and his Black Ships encouraged Japan to open up to the West. The first U.S. Ambassador, Townsend Harris, took up residence here in 1856 establishing the first embassy in Japan. One interesting thing is that communication was from English to Dutch to Japanese. Japan had been open to some Dutch trade through the port of Nagasaki in Kyushu. Shimoda saw several firsts: first U.S. embassy, first cow to be killed for human consumption in Japan, first U.S. flag to be flown in Japan. 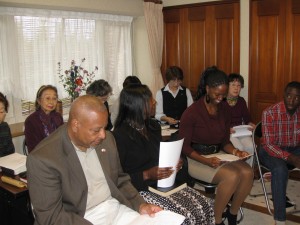 Our final weekend in Japan was a full one. We journeyed to Hachinohe. This would be like going form Memphis to Chicago. That Saturday afternoon we had a three hour class using the material I had prepared for the school lectures and had used at Ochanomizu – “Father, Son, Holy Spirit and the Christian.” The following day, Sunday, I used the lesson I had prepared for the Ochanomizu camp back in August on unity from Ephesians 4. Both lessons proved to be 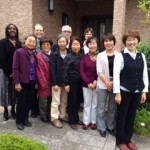 providentially what the members needed. Fourteen gathered Sunday to worship. In that number were four military brethren from the Misawa Air Force Base. As in other places, the morning assembly was followed by a time of table fellowship. 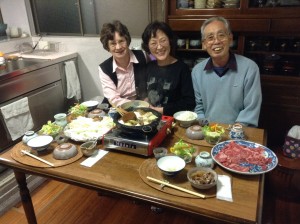 We boarded a train (Shinkansen or Bullet Train) to return to Tokyo and then on to Mishima in Shizuoka Prefecture. This is like going from Chicago to Jackson Mississippi. The whole trip took less than four hours with almost thirty minutes waiting between trains. We were greeted by a brother from the Numazu congregation. They had prepared a wonderful sukiyaki meal for us. It had been a long time since we had one. Breakfast came early. These meal times were enjoyable times of fellowship. This couple had celebrated forty-nine years together the day before we arrived. What a testimony to the joy we find in having a traveling partner. 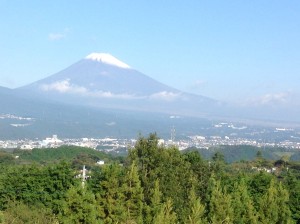 Following breakfast and before we had to leave for the day’s activities, we got a good view of Mt. Fuji with its first snow. It was a bit hazy, but you could still see the beauty of this thirteen thousand foot dormant volcano.

Our last Monday was filled with a meeting of six congregations in Shizuoka Prefecture with another two additional congregations represented. I delivered the Bible study in the afternoon under the topic of “Shine Like Stars” from Philippians 2:12-16. This was again an encouraging time of fellowship. 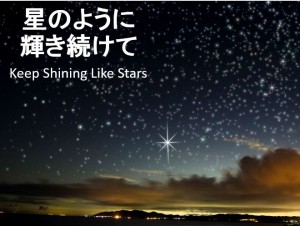 Now, the day before we depart for Memphis, we’re getting things together to pack for our return trip. We store a few things here to save weight and to use on our next visit. Many things have happened: 70th annual Ibaraki summer retreat, the death and funeral for Debbie Carrell, Ochanomizu Bible camp, Josephine’s English Bible classes with Tachikawa and Ochanomizu ladies, five premarital counseling sessions, three lectures for JSE at Tachikawa, worship with ten different congregations, chapel talk at ICU, home stays with two families, hosting our visiting Park Avenue couple, JSE lectureship. God has blessed us with health and the support of many who have checked lessons and offered advice over the past seventy days. May God continue to be glorified through his church here in Japan (Ephesians 3:20-21).

We are grateful for the wonderful hospitality we receive and for the support and encouragement from you who have written us during our time here. Thank you very much.