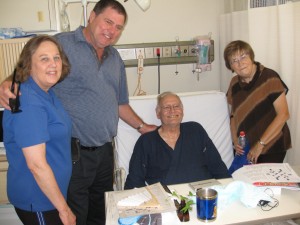 I am very sorry for no newsletters for so long.  As many of you know, I have been in the hospital with pneumonia.  I lost 13 kilo (28.6 lbs).  I needed the weight loss, but the method was not fun.  After returning home, I have gained back nearly 2 kilo (about 4.4 lbs).  I am just beginning to start to move about more.  I still can’t walk more than a few hundred feet.

During camp in July-August, I started feeling bad and stayed home during August.  In September, I went to see the doctor near my house.  He told me to go to the hospital.  I went and they put me in for 17 days.  I have had no energy for a long time.  I hope I can now regain some of my strength.  I have been a very active person, but in the past few years, I have slowed down to a snail’s pace.  My heart still has an irregular heartbeat.  In the past 3 years, I have gone through 4 procedures and twice it was stopped and restarted.  Nothing seems to have helped.  I am going to just live with it and slow down some, but continue to work.  If you have any questions, write and I will try to respond.  I have not been on the computer much in a long time.  It is hard to sit up for very long.  I am getting better at that.

Last Sunday, I preached my first sermon, since August.  I was getting a little tired at the end, but I enjoyed preaching.  Yasuki Nishimura has been doing so much for me.  Others have filled in the gaps that kept the church going.  So many people have been praying for me, thank you.  Sometimes, I wondered if it were the end for me.  But He carried me through.  Your prayers helped so much. 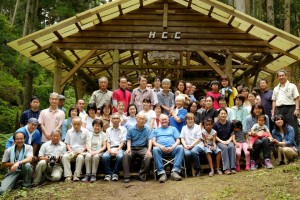 Camp went well, even though I just sat in a chair and directed.  Again, so many people filled in for me and worked so hard.  We did little carpentry work this year as I was not there much.  We had two baptisms at camp.  One young mother came and we taught her and she was very receptive.  She came to two courses and by the end of the last course, she was baptized.  The nearest church to where she lives is Tomobe!  She has been coming almost every Sunday since camp and her son joined Jean’s Kindergarten class.  It is a joy to see her enjoying worship.

This year was the 60th anniversary of Hitachi Christian Camp.  Quite a few “old timers” came up the mountain for the ceremony.  Among them was the young lady who invited us to come to camp the first time so I could baptize her.  In total, more than 50 came and we all had a good time. 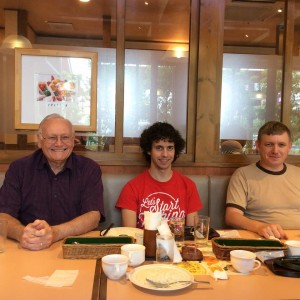 We had two men come to teach LST this year. There was good attendance and many are attending English classes that Jean and I teach.  One of the men, Sean Cannon, plans to come again next year and stay longer to help us.

Just before camp, the Tomobe church celebrated our 30th anniversary after the restart in 1985.  There were over 60 in attendance. Most were from other congregations in the area, but some came from Tokyo to Northern Ibaraki.  Also, eight of the LST readers came.

Thanks again for all your prayers for me, (Marlin).  I will get back to working hard and teaching more of those who don’t know God.  Jean and others took over my responsibilities while I was down..  I really appreciate that.  Our God is still working in Japan and doing great things.