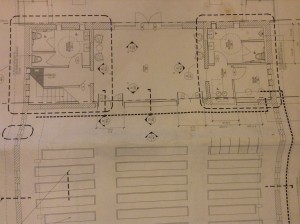 Our auditorium was built in the mid to late 1950’s. Since then it has had some cosmetic changes – paint and carpet – and a more extensive update of the podium area in about 1985 (if I learn more accurate dates/info, I’ll change this). The side roofs were realigned in 1996 and siding was put on the exterior in the late 1980’s.

However, on September 21, 2015, the most extensive update since the building was built began. This one includes refinishing the pews, completely updating the foyer bathrooms, as well as updating lighting. Other things may be considered depending on funding.

Architect drawings of the foyer show the changes being done to the bathrooms and sound room. Here are some additional pictures to help you see the progress which is being made.