We’re coming up on eleven weeks in Japan and this is only the second report. It will also be the last for this trip. All I can say in defense is that it has been a busy trip.

“Eating the elephant” has been the theme for our time here. With a heavier than usual teaching load it has seemed like an elephant before us. But bite by bite we have tackled the lessons and one by one we have taught and accomplished what we set out to do. A list of the topics, some pretty deep, were listed in my first report. Some were difficult in English let alone in Japanese. 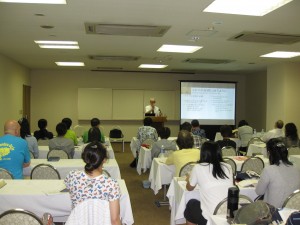 Let me begin where I left off on the first report. The annual Hakone Bible Camp for the Ochanomizu church was a wonderful time of fellowship and study. Tomoyuki Shinozaki, minister for the Numazu church (Shizuoka Prefecture), was the guest speaker. His lessons centered on how John, one of the “sons of thunder,” changed because of Jesus Christ’s love for him. Then I spoke the evening of the second day on “Following Jesus’ Footprints” from 1 Peter 2:20-21. The camp was climaxed by a joint worship with the Numazu church as we gathered together to remember Jesus around his table. 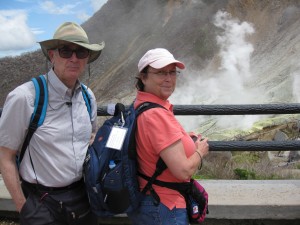 Two days after we returned from camp my sister, Charlotte Randall, came for a visit. We were excited to have her with us and to share with her some of Japan and our ministry here. She was excellent both with traveling, eating, strange customs, city life as well as down times for our study. We were able to squeeze in two overnight trips, one to Hakone and another to Mount Fuji. She fixed red beans and rice for the Tachikawa church which was thoroughly enjoyed. 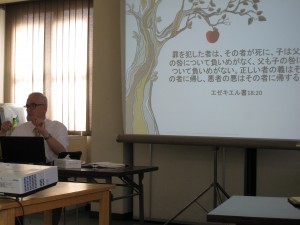 The three classes for the Japan School of Evangelism (JSE) went very well and were well received. A few years back I had been asked about the problem of suffering and did not have what I thought was a good answer. I took the opportunity for these lessons to discuss that topic as well as the book of Job. The lesson on original sin was prompted by a request to discuss that topic several years back. 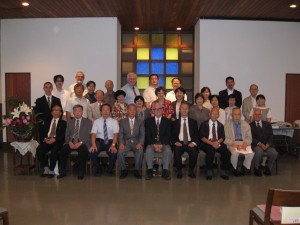 2016 JSE Lectureship commemorating the opening of the school

The lectureship for JSE went very well. I’ve been asked to put both lessons into Japanese articles for the school’s yearly journal. The first lecture was concerning a vision for the school. Here I reiterated the need to do things which please the Lord (2 Corinthians 5:9) and, while remaining faithful to his revealed will, impart truth to those who can continue to teach it (2 Timothy 2:1-7). 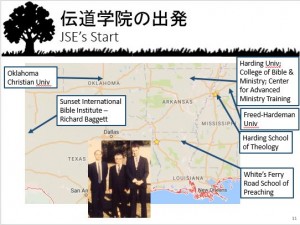 In the afternoon lecture I talked about the background history of training programs in Japan beginning with J. M. McCaleb in 1907 through to JSE which began in 1989. I spoke about the Park Avenue church’s help with the school by hosting a group of ministers researching schools in the U.S. before starting JSE. The background to this began in 1969 when Josephine and I chose to do mission work in Japan (see the last photograph in this report). This lecture was greatly appreciated and required reading a good bit of Japanese records. 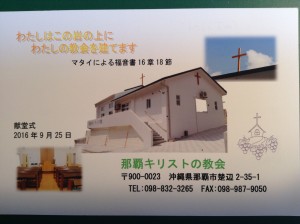 One exciting bit of news was the dedication of a new meeting place by the Naha Okinawa congregation. Their original building had begun to rust and was getting weaker. About six years ago they began making plans for replacing the building. There was a question about some of the property and then there was the question of funds. All those obstacles were overcome and they dedicated their new building September 25. We rejoice with them and pray it will continue to be a good tool for helping the congregation reach out to the Naha community. 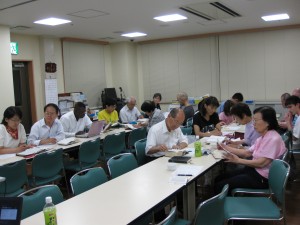 On four Wednesday nights I taught a class with the Ochanomizu church. We discussed the Lord’s Supper, looking first at the tenth plague which prompted the Passover Meal. The deliverance from Egyptian slavery which the Passover Meal commemorates was carried over into the deliverance from the slavery of sin that the Lord’s Supper commemorates. The Corinthian church had problems with the manner in which they ate the Lord’s Supper (1 Corinthians 11:17-34). Learning from their mistakes, each week we gather as a body of believers to remember how much God loves us. Then with renewed vigor we live to honor God in the coming week.

Scattered throughout this time Josephine has had classes with four ladies on Sunday and Thursday afternoons. Each class is tailored to their level of Bible knowledge and personal needs. Additionally Josephine has been in contact with former students from the Memphis “Friend-to-Friend” ministry. We’ve met face-to-face with seven of these students and their families. These are wonderful times of renewed fellowship and encouragement.

Josephine has also facilitated two classes for ladies at the Ochanomizu congregation and the Tachikawa congregation. Her topic was “People Are Not Alone” using two incidents recorded in John (8:2-11; 4:6-26). A synopsis of the lesson was: “As we read in God’s writings to the human race, we understand that Jesus was bringing to all people the overall answers for our lives.” 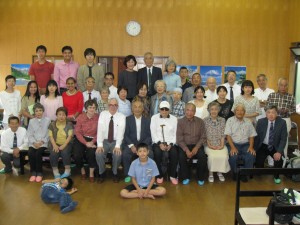 During our two week Japan Rail Pass we traveled to three speaking engagements. The first was with the Shizuoka area churches at the meeting place for the Oiwa church. The Oiwa congregation was started by Sarah Andrews before WWII. There I spoke about God’s love from Psalm 103 where David reminds himself to “praise the Lord, O my soul, and forget not all his benefits.” We had a special prayer time for two present one who had suffered a stroke and another was battling cancer.

The theme for the year at Ibaraki Christian University is freedom. We usually think of freedom as freedom from something. But I spoke of freedom to something, namely Jesus Christ, from Matthew 11:28-30. Following chapel we had curry rice furnished by the Omika church and a good visit with Jim Batten, chancellor for the university, and Makoto Tateno, minister for the Omika church. 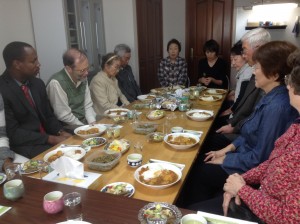 The last weekend on our rail pass was spent with the Hachinohe congregation in Aomori. This is a small house church meeting in a member’s home. The entire congregation numbers twelve. All but one member was present for the meetings. Five members of the Misawa Air Base congregation came Sunday morning. We had a great fellowship around the table following worship as we ate lunch together. 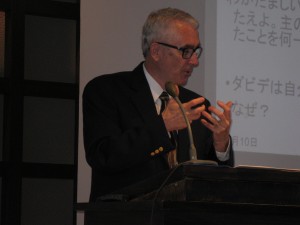 Eight of the eleven Sundays in Japan has been with the Tachikawa church. I’ve spoken from Hebrews about the supremacy of Jesus Christ and his sacrifice. The sermon for the last Sunday will be from Hebrews 10:19-25 and Hebrews 12:1-3. Jewish Christians were in danger of returning to temple worship and the Law of Moses. The writer of Hebrews was showing them how much greater Jesus Christ is and encouraging them to remain faithful to him. 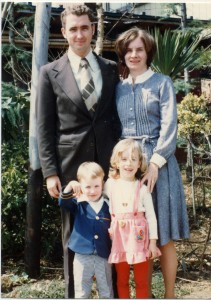 This is our second and last report on the 2016 trip. As always we stand on the shoulders of many who help us minister in this way. Countless prayers have been raised here in Japan for the Park Avenue church that has supported us now for over forty-two years and for others who continue to help us each year. Thank you so very much. God’s people are active in Japan and stand as lighthouses for the Good News. 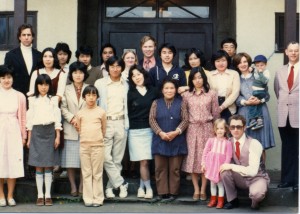 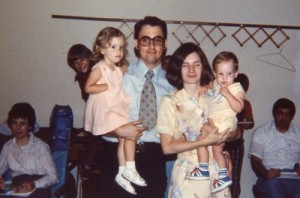 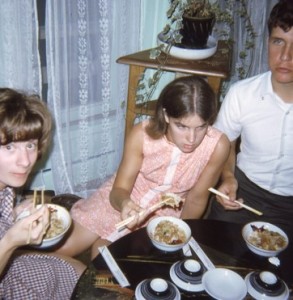 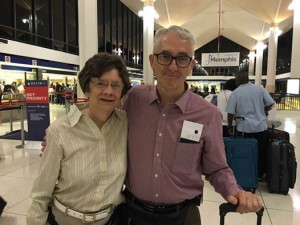 As I write this (morning of August 25) we are coming up on one week in Japan. It has been a very productive and enjoyable week. When we stepped out of the airport in Narita, Chiba, Friday August 19, we were greeted with cooler temps than expected. Cooler being in the mid to upper 80’s with 70+% humidity. However, we will take that. Since then the temps have been a bit below average thanks in part to a typhoon which came through Monday and overcast skies. 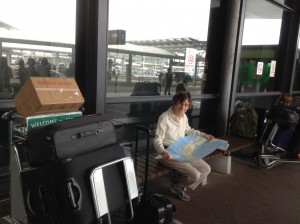 About thirty-six hours after arriving we were in worship and I shared my first of eight sermons from the Letter to the Hebrews. As you know the letter begins by affirming that Jesus Christ is God’s final and supreme communication with his creation. “In these last days [God] has spoken to us by his Son. Therefore we must pay much closer attention.” (Hebrews 1:2; 2:1, ESV)

We spent most of our first day (Saturday, August 20) here setting up the office and most of Sunday with the Tachikawa church family in study, worship, and fellowship. On Monday typhoon #9 blew through the area doing some damage but brought blue sky and a beautiful sunset that evening. The next day we went to Costco to get “provisions” for our stay. Wednesday we met with the temporary evangelist for the Yokota English speaking congregation and Masa Nonogaki, minister for the Japanese congregation.

The bulk of our time I have been seated at my desk and Josephine, on the couch reading, studying, and writing lessons. By being at Tachikawa for eight Sundays, I must come up with a different sermon each Sunday. Additionally there are classes and lectures which fill in the spaces between the Sundays. Josephine will begin having students for English Bible study today. That will continue for four Thursdays. Here’s my speaking schedule. All will be done in Japanese.