On November 2, 2022, Josephine and I returned from a ten and a half weeks trip to Japan. It has been three years since we were there to minister. It was good to be in Japan. This will be a report of some of the things we did during those weeks. 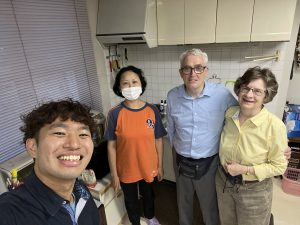 Warm greetings at the airport and upon arriving in Tachikawa

Upon coming out of immigration and customs at Tokyo Haneda Airport on August 23, we were surprised to see Ruku Obata (pronounced Luke) waiting for us. We have known Ruku since he was in grade school. He is twenty-three years old now. After graduating from college, he began a special four-year course in Bible and theology. He graciously drove us from Haneda Airport in southeastern Tokyo to Tachikawa in western Tokyo. He also carried our luggage up three flights of stairs to our dorm room in the Tachikawa church building.

Sister Sano was at the building to meet us when we arrived. She was a great help over the time we were there. She serves as the church secretary and also cares for the flowers around the church building. We were blessed on this trip to have time to deepen our relationship with her. 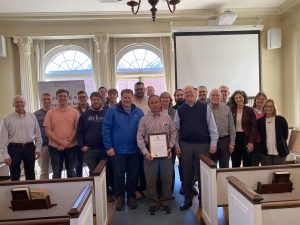 We left on Monday, August 22, and arrived in Tokyo the following day. Our first priority was to set up housekeeping and get a functional office together. This is something we did each year for twenty-three years until the pandemic started in early 2020. Our primary ministry on this trip was to fill in for Nao and Noriko Fukushima while they were in Memphis studying at the Harding School of Theology. While I shared lessons with the congregation each Sunday, Josephine reached out to members and studied with those interested in English Bible Study. 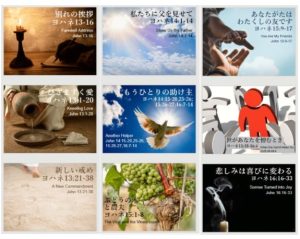 Lesson topics for the Tachikawa church

For the eight Sundays we met with the Tachikawa church, I chose to preach through John 13-16. This was Jesus’ message to his disciples the night before he was betrayed and killed. On our first Sunday, there were two assemblies. One in Japanese in the morning and one in Chinese in the afternoon on the fourth Sunday of the month. One member is from Mylasia and speaks Chinese. I wrote out my sermon in English and she translates it into Chinese. At the assembly, I read the sermon in English and she read her translation in Chinese. I did this for three Sundays while we were at Tachikawa. The first sermon was written two weeks before we left for Japan to give time for translation. The following sermons were prepared each week. 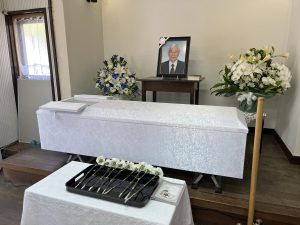 Since our main work on this trip was to minister to the Tachikawa church, we stayed in the Tokyo suburb of Tachikawa most of our time. We did get out several times. On Monday morning September 12, we traveled an hour and a half to Ochanomizu to meet up with a group going to Hitachi Ota three hours and two prefectures away. We went to the Ota church building for the visitation for brother Nobuyuki Shigekuni. This building was the place where Josephine attended her first Japanese worship assembly in the summer of 1969. The brother we had come to pay respect for was the minister at that time. He later visited us in Memphis in 1975. He was a high school teacher and principal for Ibaraki Christian High School. 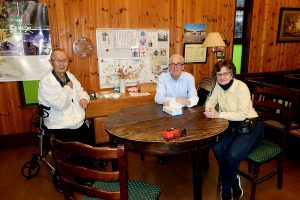 Another occasion to get out of Tachikawa was afforded by a brother from the Yokota church. He offered to take us to Haruna in Gunma Prefecture to see brother and sister Shiro Obata. The Obatas helped us numerous times while we were full-time workers in Japan (1977-86). Brother Obata was one of my mentors. He fell in July 2019 and suffered a serious injury to his spine. After much healing and physical therapy, he is back walking and continues to preach for the Haruna congregation each Sunday while seated. Sister Obata suffered heatstroke this past summer and is now in a care facility. It was a blessing to be able to visit them. 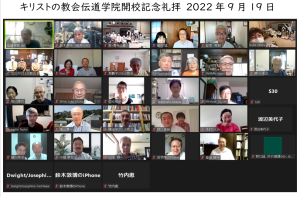 In addition to speaking at Tachikawa, I spoke at the fall lectureship for the Japan School of Evangelism with Takeshi Kushida minister for the Hitachi church. My topic was Paul’s understanding of the church from Ephesians. Paul pictured this gathering community of believers in several ways. But I focused on my favorite image of the church as a household of God (Ephesians 2:19).

Our two-week rail pass began on September 28 with our going to Kojima in Okayama Prefecture. This is like going from Memphis to Austin, Texas. We went there to visit with Sandy Rogers. Over twenty years ago, she and Brent moved to Kojima to teach English and started a congregation at the same time. Brent died three years ago but Sandy remains to work with the congregation. Their school closed just before the pandemic broke out. On our return to Tachikawa, we visited a couple Josephine and I had English Bible classes with while they were in Memphis. 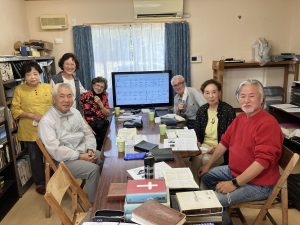 Tuesday Bible class with some of the Numazu church members

During the second week of our rail pass, we made a day trip to Shizuoka. I taught a class for the Numazu church at their Tuesday morning Bible study. Sarah Andrews started that congregation after WWII. There are three other congregations she started before the war in that area – Okitsu, Oiwa, and Shimizu. We received a delicious sushi lunch after the class. We visited with brother Tomoyuki Shinozaki former minister for the Numazu church as well as brother Fumio Maeda minister for the Nakada church and his wife Sachiko before returning to Tachikawa. 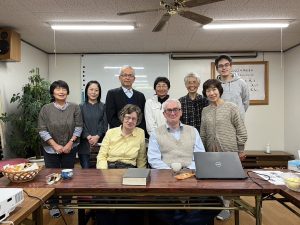 Later that week of the rail pass, we started our long trip north. It began with the Tomobe church. The church members knew we were coming so they planned an impromptu meeting for that evening. It was a “tea party” with fifteen gathered of which three were non-Christians and one of them came for the first time. I shared a lesson and answered questions during that meeting. We appreciated the members quickly organizing the meeting.

While in Tomobe, Jeanne Ray was our host. She has opened her home to so many over the years. She and Marlin came to Japan in about 1972 to teach English. This gradually changed to re-establishing the church in Tomobe. It has now been over 35 years since they started ministering in Tomobe. 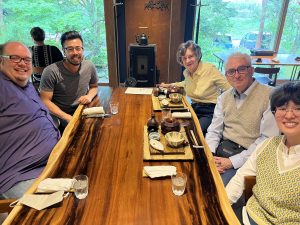 Joel, Hiro, and Seika ministering to the Mito congregation

While in the Ibaraki area, we visited Joel Osborne and Hiro Akahoshi who team minister to the Mito congregation. The church secretary, Seika, also came with them. We had a wonderful meal together and discussed the work in Mito and in Japan in general. We worked with Joel and Hiro in 2011 following the tragic earthquake and tsunami.

From Ibaraki, we went further north to Hachinohe in Aomori Prefecture. This is like going from Memphis to Chicago. Twelve of us gathered on Sunday morning for worship. It was such a blessing to be with these brothers and sisters. They rented a room in a local hotel for the occasion. They usually meet in a member’s home. Following the worship, we had a wonderful bento lunch and then an impromptu ladies’ class. It is always an encouragement to see those who have the desire to learn more about God. 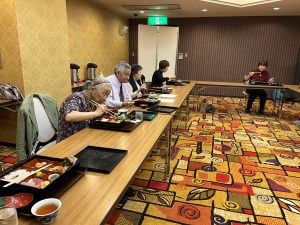 Lunch with the Hachinohe congregation after worship

On our way back from Hachinohe, we stopped at Omika in Ibaraki Prefecture. I spoke in chapel for the Ibaraki Christian University. That afternoon, Josephine was asked to share a lesson with some of the ladies. She taught from Habakkuk. Later that week after returning to Tachikawa we had lunch with a couple we taught while in Memphis. The husband teaches at Nagasaki University and the wife works for a research group.

While we had to secure visas to enter Japan, 0n October 11 the borders of Japan were fully opened to foreign tourists. This means that travel to Japan can be done pretty much as it was before the pandemic. This gave us hope for a spring trip in 2023. 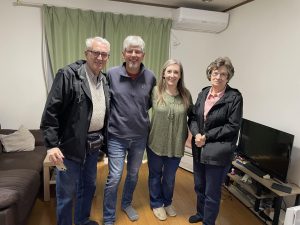 Visit with Leslie and Sara Taylor ministering in Matsudo, Chiba

The week before we were to leave, we were finally able to squeeze in a visit to Matsudo in Chiba Prefecture to see Leslie and Sara Taylor. They had worked with the Matsudo church for five years with Steve and Debbie Carrell. They returned to the states for two years before returning two years ago in the midst of the pandemic. They are now working full-time with the Matsudo congregation.

Our final Sunday was spent with the Ochanomizu congregation in downtown Tokyo. They sponsored us when we came as full-time workers in 1977. Over the years, we have benefited from their encouragement and help. I spoke for the Japanese assembly in the morning and then for the English assembly in the afternoon. We stayed in the old building in 1969 as college students. Brother Obata, mentioned above, was the minister at that time. It was like coming home. 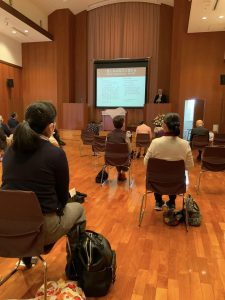 Speaking at the Ochanomizu congregation

On Monday, October 31, we began the process of packing and closing up housekeeping. We had tried to go to Japan in 2020 and 2021 but were not allowed. Having finally been able to enter and minister, we are very thankful. It has been great to renew friendships and minister once again in Japan. We are ever indebted to those who encourage and support our ministry. Our prayers have always been that God is glorified through our efforts.