A Short History of Christmas

“If a thousand old beliefs were ruined in our march to truth we must still march on.” – Stopford A. Brooke 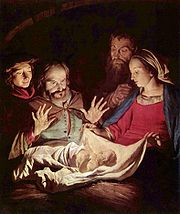 The birthday of Jesus Christ has been celebrated on December 25th since A.D. 336.  During the first three centuries of Christ’s Church, this holiday festival was not observed by Christians, nor was it on their calendar.  The Bible does not reveal the year, and there is considerable uncertainty about the correct day and month.

The Christmas celebration was started in the fourth century to put an end to pagan festivals.1 Most of the Eastern churches settled for January 6th, but the Western churches chose December 25th to commemorate the birth of the Messiah.  These days were selected because they were already public holidays for pagans.  The Romans celebrated “Natalis Solis Invicti” (the birth of the Unconquered Sun), and the Iranians celebrated “Sun of Righteousness.”

Some Christians opposed the birth celebration of Jesus because birthdays were reserved for pagan gods.  Origen wrote that it would be wrong to celebrate the birth of the Christ in the same way Herod and Pharaoh had been honored.2 However, not all of his contemporaries agreed.  Clement of Alexandria favored May 20th, and Hippolytus selected January 2nd as the date of Jesus’ birth.

What we do know about the birth is that it occurred during the reign of Caesar Augustus.3 His mother was a virgin who was pledged to be married to a man by the name of Joseph, son of Jacob (Matthew 1:1-25).  The birth occurred in Bethlehem of Judea, during the first census of governor Quirinius, and shepherds were told by an angel that the birth had occurred (Luke 2:1-20).  Likewise, Magi from the east were led by a star to worship the infant king (Matthew 2:1-12).

In this, the fullness of time, the incarnate son of God came to earth to redeem mankind (Galatians 4:4-7).  What day was he born?  We do not know.  Do you believe it happened?  Only you can answer that.  Christian, are you up for the task?

“Why did my Savior come to earth, and to the humble go?  Why did He choose a lowly birth?  Because He loved me so!” -J.G. Dailey

1 The origin of the word Christmas:

English =  Cristes-maesse (the mass of Christ) appeared in 1038

Dutch = Kerst-misse (the mass of Christ)

Greek/English = Xmas (the Greek letter, Chi or X, is the abbreviation for Christ, thus Christ’s Mass)

3 Caesar Augustus ruled Rome from 31 B.C. until 14 A.D.  In 1627, the scholar Petavius invented the system of dating the events before Christ (B.C.).  On the Gregorian calendar, B.C. is followed by “Anno Domini”  (Latin phrase for “In the year of our Lord,” also known as A.D.).