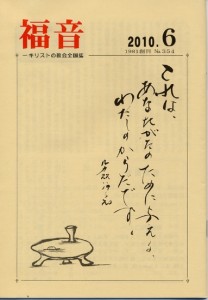 On May 15 the church school had a “Barbecue Luncheon.”  A total of 21 attended.  We were troubled by a cold breeze from the ocean.

On May 16 we had a “Senior Meeting” to plan activities for the year.  There were several interested so it should be a fun year.

On May 29 the “Stepheno Group” went to the Daigo Onsen.

On May 14  there were 11 ladies from 9 congregation meeting to study from Genesis and to have time for fellowship.

Brother Saito ministered to the Hidaka church on May 2.

On April 17 there was a cold rain when 9 went to Hitachi Christian Camp.  Here and there was still some snow here and there.  The foundation for a new cabin was built.

On April 18 brothers Voss, Torizawa, and Watabika preached at the Ota, Hidaka, and Nukata congregations respectively.

On Sunday, April 25, there was a special worship for those who have died.  The family members came together for the meeting with the prayer that the comfort of God will be with them.  There was a potluck meal together following the service.

Sasakieda was baptized May 16.  She had participated in an English Bible class with Linda and been on three mission trips to Cambodia.  We pray for her growth.

Joel was installed as missionary with the church on May 2.

The first Let’s Start Talking team arrived May 15.  They are from Washington state, Bellevue church of Christ.  They will work until June 3.

Congratulation to Terasaka who was baptized April 25.  We welcome him to the Lord’s family.

Ladies Devotional Overnight Camp was held May 14-15 at Kamakura.  The theme for this meeting was “Christianity Within Japanese Culture.”  There were 12 ladies attending. 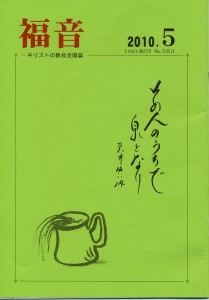 The “Lamb Club” met Friday, April 2.  There were four groups of mothers and children.

Brother Kushida was at each of the entrance ceremonies for the ICU kindergartens: Omika-April 9; Hitachi-April 12; Takahagi-April 13.

On April 10 (Saturday) the minister for the Hitachi Taga church, brother Tadokoro, was married to sister Ikegami.  Brother Kushida was the master of ceremonies for the reception.

Following the worship assembly on April 18 a members’ meeting was held to discuss plans for the new year as well as the new year’s budget.

The Sunday children’s Bible class teachers met April 24.  There has been an increase in the number of children placing a hardship on the current teachers.  If you have an interest, please help.

From April brother Batten is president of Ibaraki Christian University.  We pray that the Christian spirit will thrive.

In the morning brother Fukuyama lead a study from 2 Timothy 2:1-13 concerning workers in the church and setting goals.  There was discussion following this study.  In the afternoon the upcoming joint worship assembly as well as the Cambodia mission trip, Hitachi camp, and the situation at the Mito and Tomobe congregations were discussed.

Congratulations to sister Sato who was baptized March 28.  May the Lord’s blessings and leading be upon this new sister-in-Christ.

Brother Osborne and sister Ingle (an intern) safely moved to Mito March 30 (Tuesday).  They will being their work with the congregation on May 1.

Using Skype we had a joint worship with our cell group and Mr. Lippe, Mr. Meyers, and Mr. Little of the Naperville congregation.

The congregation had a going away party for the Hancock family on April 25 (Sunday) and at the same time a welcome party for brother Osborne and sister Ingle.

On Sunday, April 11, the church met under the cherry tree in the church yard for a pot luck meal together.  Following the meal there was a general church meeting until around 5 o’clock in the afternoon.

Following the worship assembly on April 18, under sister Nishimura’s directions we practiced hymns and expanded our repertoire of songs.

The home for blind women was established in 1968 in Fujiyoshida, Yamanashi.  Sensei Funayama, sister Yoshiya, and others helped to begin this good work.  The home closed at the end of March.  We are thankful for its many years of service.  The Haruna church received their tape cabinet and children’s library.

On Sunday, April 4, those able to work remained to put together the yearly report with many pictures (2008 and 2009 pictures were included).  Articles and personal testimonies were included in the report along with illustrations.  We are thankful for the help putting this together.

A memorial service was held at the church grave site following the morning assembly on April 11.  The sky was bright blue, but cold.  The cherry trees were not yet in full bloom, but we did have a flower viewing picnic anyway.

The church hosted the monthly ministers’ meeting on April 19 (Monday).

April 4 (Sunday) was promotion day for the Sunday school students.  Both adults and children met together.

The church hosted the teachers’ meeting for the Japan School of Evangelism on April 8 (Thursday) and for the school’s supporters on April 25 (Sunday).

Sister Yamada, a student at Abilene Christian University, will be in Thailand from May 25 until August 3 for mission work.  Those wanting to help with her support should see sister Hosokawa.

Nagai-san was baptized on April 25 (Sunday).  Though he is a Buddhist priest (僧職), he became a Christian.  This is very surprising.  Please pray for the new life of brother Nagai.

The church hosted the meeting of ministers and church leaders for Shizuoka Prefecture on April 2 (Friday).  There were five in attendance.  The major discussion for the meeting was the October 11 joint worship and seminar for the Shizuoka area congregations. 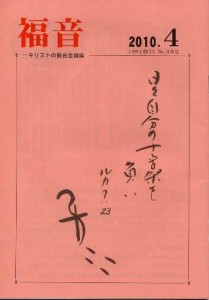 Rich Little of the Naperville church in Chicago will be the guest speaker for the June 1-3 All Japan Ministers’ Meeting.  He will speak on “Becoming the Lord’s Disciple – 2 – Putting It into Practice.”

The Spring Hitachi Christian Camp will be from May 3 to 5.  The theme for the camp will be “I Am the Vine” from John 15:5.

On March 8 brother and sister Uza went to Sosu camp to work.  The temperature dropped to 7 degrees Celsius so they worked in the cold.

Brother Shinozaki (Numadzu church minister) spoke on 1 Peter for the Japan School of Evangelism “Golden Koza” on March 13.  There were 14 in attendance.

We are thankful for brother Abe’s baptism January 31.

On March 7 Oyama-san and Uehara-san were baptized and became Christians.  We pray that for the Lord’s guidance as these sisters begin their Christian walk.

Each week we receive delicious Ochanomizu Ramen.  This requires men’s help.  Please brothers help with this.

“The Abundant Life” was the theme for the gospel meeting March 17-19.  A elder and deacon from the Herrington’s overseeing church, Northside, in Wichita Falls KS were in Japan to visit them.  Each plus Paul Herrington gave lessons for the series.  Attendance for the three night was 28, 29, and 30.

The March meeting of ministers from churches in Ibaraki and north was held in Tomobe on March 8.  The following ministers were in attendance: Koiwa – Takahagi; Kushida – Hitachi; Tadokoro, Saito, Alexander – Taga; Ataka, Uzawa – Omika; Aizawa – Shirozato; Fukuyama – Katsuta; Tsuneki – Mito; Ray – Tomobe; Noguchi – Ishioka.  The study time was lead by brother Tsuneki from Ephesians 4:12-16 on the topic of church growth.

On March 28 Yamazaki was baptized.  Hallelujah! 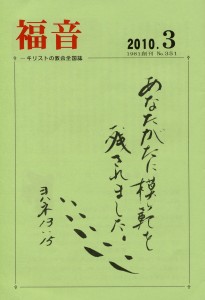 These are some of the church news items taken from the March issue of the Fukuin magazine. The church listing is in order from north to west Japan.

Prayer request: The Mark Hancock family, who have been in Japan for 17 years, will move to the states by the start of summer.  Two missionaries in training will begin work with the church starting in May.

A Coming of Age Ceremony (Seijin Shukufuku Shiki, 成人祝福式) was held January 17.  Three were celebrating the coming of age.  We pray that the coming life they will live will be blessed by God.

Welcome.  Sister Suzuki (graduate of ACU and former Mito church member) moved to Takasaki as an English teacher.  She is a third generation Christian.

On February 14 Nakano-kun was baptized and became a Christian.  We pray that God’s rich blessings and protection be on this new brother.

The meeting of the Tokyo west minister was held on February 15 at the Numadzu building.  Those present were: Eric, Obata, Carrell, Sagitani, Shinozaki, Suzuki, Nonogaki, Hysten, Fukushima, Maeda.  During the morning Eric led the group in a study entitled “Nurturing Disciples.” 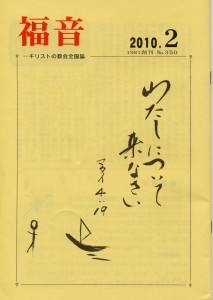 These are some of the church news items taken from the February issue of the Fukuin magazine. The church listing is in order from north to west Japan.

On January 1 the New Year’s Worship was held. There were 18 present with an average age of 24 years. We repaired the church sign which was blown over at the end of last year.

The church leaders’ meeting was held January 13. On January 17 after worship we celebrated January birthdays with a fellowship meal and making mochi. Following that Kitago-san was baptized by Huddleston in the ocean. We pray that God’s great blessings will be on our new sister-in-Christ.

On December 22 minister Ataka spoke in the chapel at the Nazarene Home for their Christmas assembly. Presents made by the ladies of the congregation were given to some of the blind residents.

From December 28-30 the Hitachi Christian Winter Camp was held.  Thirty people participated. The camp theme “Five Loaves, Two Fishes” was an opportunity to learn about abundant and never ending love of God. They also worked to build the foundation for the Naomi Cabin. 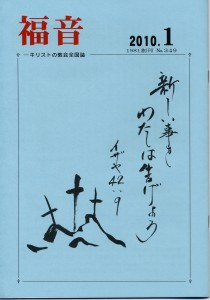 These are church news items taken from the January issue of the Fukuin magazine. The church listing is in order from north to west Japan.

During the month of December the Thursday evening Bible study continued.  On December 10 Koiwa, minister for the church, spoke in chapel at Ibaraki Christian University.

On December 11 sister Shioyamada attended the Ladies’ Meeting at the Mito church. There were ten who attended from eight congregations.

On December 6 the Lee Family from Singapore visited the Taga church. Tadokoro and Ikegami attended the Mabune staff meeting on December 19.

The Mana Group prepared presents for the Nazare Elderly Home and gathered milk packs. Joe Betts and his son, John, visited from November 18 to December 2. Joe preached the Sunday sermon on November 19. A special concern concert to commemorate the 50th anniversary of the founding of the Tsuchiura church was held at the Urara Hall. Four from Omika attended. Eight people went to the Hitachi Work Camp to help prepare a cabin foundation.

Three members participate with the acapella singing group Voci Seraphim to commemorate the 50th anniversary of the founding of the Tsuchiura church.

Following worship on December 20 we have a very enjoyable and close fellowship time for Christmas. Then on December 24 we have a special assembly. The lady who lives next to the church building attended and have since attended morning assembly. There were 24 present for this assembly.