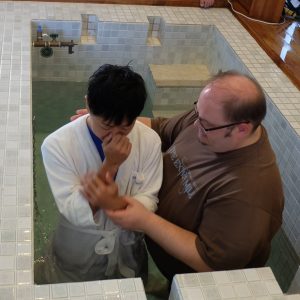 Joel Osborne baptizing a person he has studies with.

After that time some of the group returned to the states for further study and Joel worked in various mission points in Asia gaining experience in church planting and ministry outreach. Upon returning to Japan in 2009, Joel sought guidance through prayer as to his future work. He began working with the Mito congregation in April 2010 focusing on discipleship and spiritual formation. He and Kristin Hanaoka were married on November 22, 2015.